‘La Belle Époque on Paper’ Coming Up at Freeman’s 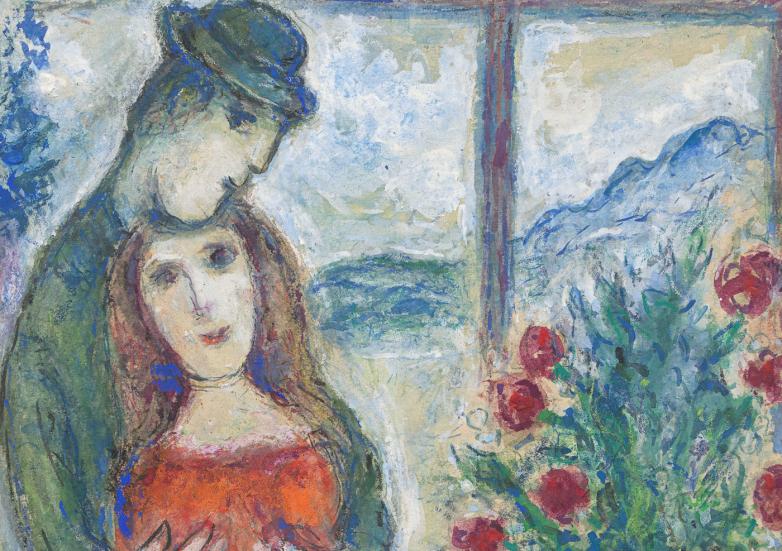 Philadelphia — Freeman’s May 11 La Belle Époque on Paper auction brings an important collection of artworks from a private New York family to market. The sixteen lots offered—almost all works on paper—highlight the work of such School of Paris luminaries as Pablo Picasso, Marc Chagall, Raoul Dufy, and Joan Miró, and present buyers with remarkable fresh-to-market collecting opportunities.

Leading the sale is Marc Chagall’s 1961 Devant la Fenêtre à Sils, a lush, large gouache on paper that capture’s a lover’s embrace against a backdrop of a window overlooking the Alps ($250,000-400,000). Lovers were among Chagall’s most common themes throughout his career, and the enthusiasm and warmth emanating from the present work recalls Chagall’s blissful period in the South of France earlier in his career, which deeply influenced his later work.

Individually and as a collection, the works on offer in La Belle Époque on Paper speak to the family’s affinity with French culture and its strong ties with Paris specifically, where they resided half the year. Works like Raoul Dufy’s Régates, a 1924 watercolor on paper ($50,000-80,000), capture the era’s joie de vivre; works on paper by Paul Signac and Maurice Utrillo offer charming renditions of Parisian street scenes.

Drawings like Pablo Picasso’s Homme à la Flûte et Enfant ($50,000-80,000) speak to the kind of artistic experimentation and energy afoot in Paris, where artistes bohèmes flocked in search of new challenges and ideals and came to form vibrant artistic communities within the city. The collection also highlights important antecedents to this artistic activity, including four works by Camille Pissarro, led by his ink-and-wash Le Penseur.

With 23 single-owner selling events totaling over $31M since 2010, Freeman’s considers successful sales of single-owner collections to be one of our strongest achievements. The Modern and Contemporary Art department alone has realized many of Freeman’s most exciting single-owner sales, including the $1.5M white-glove sale of the Collection of Robert J. Morrison in 2019 and the white-glove sale of the Collection of Dr. Henry & Mrs. Fannie Levine in 2020, achieving just under $1M.