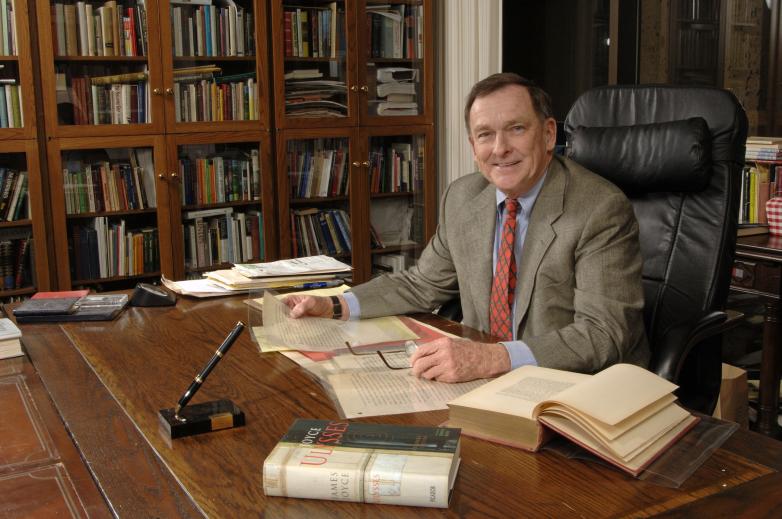 Credit: University of Texas at Austin

Austin, Texas — Thomas F. Staley, author, professor emeritus and 25-year director of the Harry Ransom Center at The University of Texas at Austin, died March 29. He was 86.

Staley also expanded the Center’s collections beyond literature with such acquisitions as the archives of actor Robert De Niro and photojournalist David Douglas Duncan, and the Bob Woodward and Carl Bernstein Watergate papers.

“The collections that Tom Staley acquired over his 25-year directorship are a lasting legacy and for generations to come will stand as a record not only of our times but of one man’s astute engagement with our culture,” said Ransom Center Director Stephen Enniss.

In 2007, The New Yorker’s D.T. Max wrote of Staley: “The Ransom Center, under Staley’s leadership, easily outmaneuvers rivals such as Yale, Harvard, and the British Library. It operates more like a college sports team, with Staley as the coach—an approach that fits the temperament of Texas.”

He wrote and edited 15 books on Ulysses author James Joyce, Italo Svevo, modern British female novelists including Jean Rhys and Dorothy Richardson, and modern literature, generally. He was the founding editor of the James Joyce Quarterly, which he edited for 26 years, and he founded the Joyce Studies Annual. He chaired or co-chaired international James Joyce symposia in Dublin and Trieste, and was a board member and former president of the James Joyce Foundation. He earned a Ph.D. from the University of Pittsburgh in 1962 and was a Fulbright scholar at the University of Trieste in 1966 and again in 1971. Among his books are An Annotated Critical Bibliography of James Joyce (1989), Reflections on James Joyce: Stuart Gilbert’s Paris Journal (1993), and Writing the Lives of Writers (1998).

In 1988, Staley became director of the Ransom Center and led the institution through a 25-year period of tremendous growth and was responsible for helping make it one of the finest humanities research centers in the world.

“A library is built upon a fundamental optimism, a belief that it is essential to know the past in order to understand the present and to better anticipate the future,” Staley wrote in the 2007 book Collecting the Imagination, which documented the first 50 years of the Ransom Center.

His enthusiasm and instincts about the world of rare books and manuscripts enabled him to enhance the collections through strategic acquisitions and by linking collections together by focusing on connections among writers, artists and individual works.

A few months after he was appointed director, he and the Center’s curator of French literature, the late Carlton Lake, were able to secure the archive of Stuart Gilbert, a renowned translator of Malraux, Camus, Sartre and Cocteau. Gilbert also was James Joyce’s friend and literary collaborator. The collection was filled with Gilbert’s notes, correspondence, drafts and a diary in which he recorded his day-to-day interactions with Joyce.

The collection yielded the discovery of a typescript of the opening to Joyce’s acclaimed novel, Finnegans Wake, marked in Joyce’s own hand with corrections. This was a missing link in the chain of previously discovered drafts, bringing international attention to the Center and the university.

The acquisition aroused interest among scholars, and Staley used this opportunity to reemphasize the Center’s academic focus. He featured selections from Gilbert’s diary in the inaugural issue of Joyce Studies Annual, a journal he founded and published under the auspices of the Ransom Center for 14 years.

“Drafts and correspondence tell you the story of how it all happens,” Staley said in a 2009 interview. “When you realize why a writer threw something away, you learn more about that work. You see the next scene that was written instead, and why it was better. You get a sense of how the puzzle comes together. And that’s invaluable for students and scholars.”

He also was a professor at The University of Texas at Austin in the English Department and held the Harry Huntt Ransom Chair in Liberal Arts before becoming professor emeritus.

“He has been an immense force for bringing prominence to the Ransom Center and the university, and all of that has benefited the English Department,” said Martin W. Kevorkian, the department chair. “Dr. Staley surely will be missed.”

Prior to coming to UT, he was a professor of English at the University of Tulsa and served as dean of the Graduate School, dean of the College of Arts and Sciences, and provost and vice president for academic affairs. During his time at Tulsa, he was instrumental in building the literary collections at the university’s McFarlin Library.

“Students who come to the Center are able to hold in their hands the great figures they are studying in their courses. They can examine the succession of drafts that led to a published work—the false starts, the scratch-outs and rewrites that are the relics of an author digging for the right words,” Staley noted.

He built what is widely regarded as the most significant collection related to the postwar British theater, acquiring the archives of playwrights Tom Stoppard, Arnold Wesker, John Osborne and David Hare. Other collecting strengths of this period include the archives of many Jewish writers and anglophone African authors.

“Focused, full of energy, friendly, and good company—somebody who loves and lives for what he is doing,” Stoppard (“Rosencrantz and Guildenstern Are Dead,” “Travesties”) commented upon Staley’s retirement in 2013.

Staley increased the Center’s endowments from $1 million to more than $30 million, establishing endowments to support acquisitions, internships, fellowships, education and programming, lectureships and symposia. He spearheaded the $14.5 million renovation of the Ransom Center in 2003, which included the creation of 40,000 square feet of newly constructed public space, including a new reading and viewing room, a spacious gallery and theater space, and windows etched with highlights of the Center’s collection.
“He brought an irresistible vibrancy and joy to his work and delighted in the people around him,” said Ransom Center Associate Director Megan Barnard, who worked closely with Staley for a decade.

“Although his remarkable record of building collections will long be celebrated, many people will remember him most as a generous mentor, colleague and friend. He made an immeasurable impact on many lives.”
On Aug. 31, 2013, after 25 years as one of the most visionary directors and a trailblazer in the special collections field, Staley retired from the Center.

“Tom Staley successfully convinced us over the years to be all we could be—to recite poetry and sing out loud,” longtime friend, former Ransom Center Advisory Council Member, philanthropist and collector Suzanne Deal Booth said of Staley.

“Tom brought treasures of the intellectual world to UT Austin, and more importantly, through his wit, passion and brilliance, he brought people closer to the truths embodied in these works of art,” said Jay Hartzell, president of the university. “His enormous impact on the Ransom Center will be felt in perpetuity, and in that sense, Tom lives on.”

The Thomas F. Staley Endowment for Excellence in the Humanities was established in his honor in 2010 to enhance the mission of the Ransom Center, including the acquisition of important cultural archives and fostering their accessibility to scholars and the public.

He is survived by his wife, Muffi; their four children: Tom Jr., Carrie, Mary and Tim; and six grandchildren: Katie Wheeler and John Wheeler, Jake Ramzy, and Emerson, Foster and Cormac Staley.