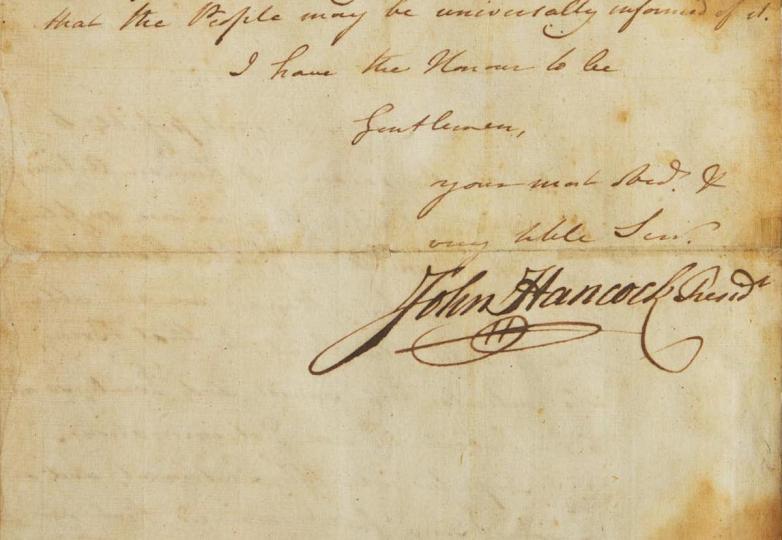 Philadelphia — Freeman’s is honored to present John Hancock’s July 8, 1776 letter to Georgia announcing the Declaration of Independence. It is being offered in Freeman’s May 4 Books and Manuscripts auction, estimate upon request.

Head of Department Darren Winston says, “Given the rarity of this highly important historical letter, as well as record prices we’ve seen across the board for rare American documents in the past year, we expect a lot of interest and perhaps a not insignificant hammer price.” This document is one of only five Declaration of Independence proclamation letters sent by John Hancock to the legislatures of the original thirteen states known to survive.

Once the Declaration of Independence was adopted by the Continental Congress in Philadelphia, on July 4, 1776, the text was rushed to John Dunlap’s print shop where approximately 200 copies were printed that night, only 28 of which survive today. Hancock made quick work of informing the states of America’s newfound independence by sending these letters, along with Dunlap’s broadside, to each. In today’s world it is almost inconceivable that it took a month for the news of this magnitude to be delivered.

In this letter, penned at one of America’s defining moments, Hancock writes, “the Congress have judged it necessary to dissolve all Connection between Great Britain, and the American Colonies; and to declare them free and independent States ... The important Consequences to the American States from this Declaration of Independence, considered as the Ground and Foundation of a future Government, will naturally suggest the Propriety of proclaiming it in such a Manner, that the People may be universally informed of it.” This powerful announcement forms the backbone of this important piece of American history, an unmissable opportunity for collectors.

Freeman’s sale of this extraordinary document is a testament to its ongoing reputation as one of the foremost auction houses in the country for early Americana. Freeman’s historic $4.42M sale in 2021 of a rare copy of the 1823 William Stone printing of the Declaration of Independence further burnishes this reputation: the result marked the second-highest price ever paid at auction for any copy of the Declaration of Independence, and the highest price ever paid for a document printed in the 19th century.

Books and Manuscripts features several other significant American documents, including the first Connecticut printing of the Constitution of the United States ($18,000-24,000); a manuscript copy of Benjamin Franklin, John Jay, and John Adams’s journals of the peace negotiations with Great Britain from 1782 to 1783 ($50,000-80,000); and a February 23, 1776 letter, signed by George Washington as he commanded the Continental Army, on behalf of one of the earliest European military officers who lent their services in the name of American independence ($20,000-30,000).