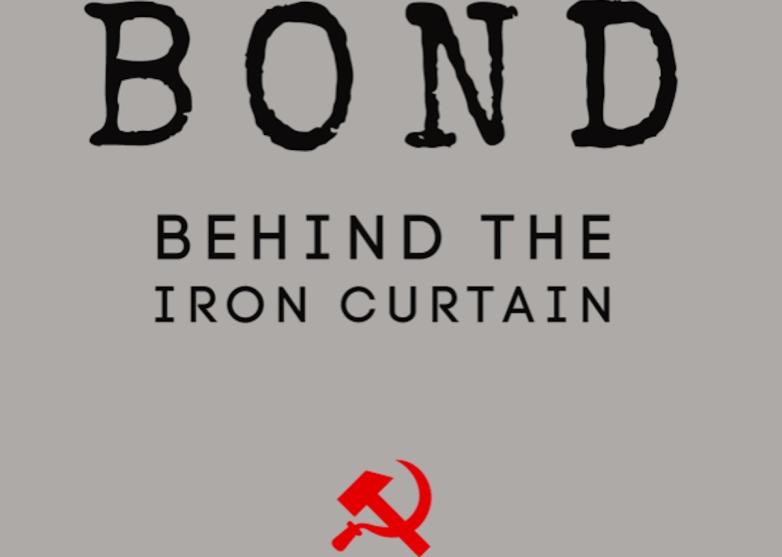 Courtesy of The Book Collector

Cover art for Bond Behind The Iron Curtain.

James Fleming, nephew of James Bond creator Ian Fleming and editor of The Book Collector, published an illuminating book last year that explores a shadowy corner of the 007 universe: how the USSR and other Communist states pushed back on the famous fictional spy. In Bond Behind The Iron Curtain, Fleming examines contemporary critical reviews, as well as examples of Bond counter-narratives and those in which Bond gets his comeuppance at the hands of his enemies. What Fleming has uncovered is not only significant to Bond bibliography but of great interest to any fan.

To learn more, I posed some questions to Fleming, which he graciously answered; our exchange follows.

RRB: Aside from your relation to Ian Fleming, what brought you to this topic specifically?

JF: I had a friend at university who started a James Bond Fan Club and had the chutzpah to go and see Ian in his office in Mitre Court in London. It was Ian who told him about the article in Izvestiya and gave him a copy of the translation – and my friend who told me. That was in 1962 and from that day until I took over The Book Collector in 2016 I could find nothing more, despite asking everywhere. It was when I began at the magazine that dealers got in touch with me. Had I seen this? Did I know of that? In all languages the material began to arrive.

The kick-off point for it all is the ferocious attack on Ian Fleming and Bond in the Izvestiya article of May 1962 – ‘Who is Mr Ian Fleming, the creator of this – to put it mildly – rubbish?’ Ian was elated by this (see his letter to Bobby Kennedy) and persuaded Cape, his London publisher, to use it on the back flap of the dust-jacket of his next novel, On Her Majesty’s Secret Service, which was coming out in 1963. Cape duly printed the jacket but then the Cuban missile crisis came along and they got cold feet. A banal replacement jacket was put together and the Izvestiya jacket binned. Maybe fifty copies have survived? It's impossible to say. It must be the rarest of all the commercially produced Bond material.

As an aside, the hardest part of my research was finding a copy of the original issue of Izvestiya for 29 May 1962. Without the evidence before me, I could never have been sure it wasn’t a fake, written perhaps by my uncle himself. Thanks to friends and friends of friends I eventually got a copy from the Russian National Library. (Might not have happened today.) 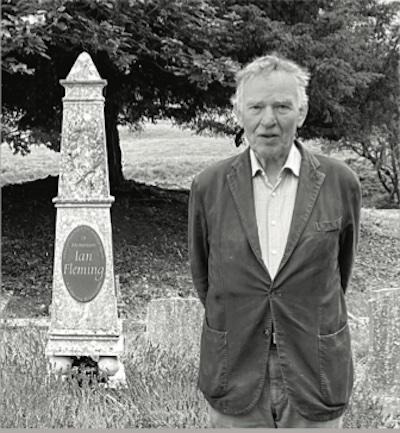 James Fleming standing near the obelisk marking the burial site of Ian Fleming.

RRB: How much of the Kremlin’s targeting of Fleming’s Bond novels could have been connected to the fact that President John F. Kennedy publicly endorsed them?

JF: Of course the chance to have a go at ‘the West’ via JFK’s endorsement of Bond was probably a factor in the Kremlin’s campaign but I suspect of equal importance was the need to find a diversionary target to take people’s minds off the appalling living conditions in the USSR. Look at the banner that was carried in a Mayday parade: CUT KHRUSHCHEV UP FOR SAUSAGES.

RRB: What most surprised you in your research?

JF: What most surprised me were the circumstances around the birth of the fake Bond novels – the Kingsley Amis one, Colonel Sun was the first. The KGB paying a Bulgarian to write a novel in which a Red agent kills off Bond and then sending him (with his minder) to London to sell the book internationally? Launching 07 to take the place of 007, which was copyright protected? You couldn’t have made it up. No wonder the Fleming family rushed to protect their franchise.

RRB: James Bond remains such a force — in book publishing and collecting, certainly, and also in film — and his popularity relies in large part on Cold War dichotomies. How has that changed between the 1960s and today? Is he loved or hated in Putin’s Russia?

JF: Everyone loves the Bond films, regardless of nationality, but the books are a different matter. Translation rights (English into Russian) weren’t sold until 2005, years after the Soviet Union was dissolved. It may be that Russians are more reserved than Western nations and that Bond’s antics appear silly to them and his promiscuity immoral. Besides, they have their own equivalent to James Bond, the Stierlitz books written in the 1960s and the subsequent films and television series. Moreover, the Stierlitz plots, which tend to have German opponents, are more congenial to the Russians than the glamorous international scenarios of the Fleming novels.