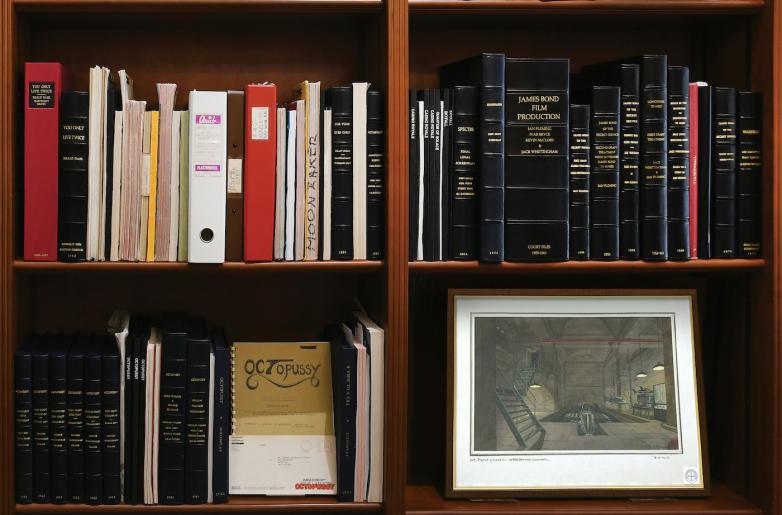 London — The most extensive collection of James Bond film scripts, screenplays, manuscripts, storyboards and film treatments will be jointly offered for sale by world-leading London-based rare book dealers Peter Harrington and Adrian Harrington Rare Books for £500,000, in time to celebrate the 60th anniversary of 007 on the big screen.

The set of approximately 120 original and inscribed screenplays, scripts, costume designs, storyboards, publicity material and even legal correspondence related to some of the franchise’s most memorable characters and moments on and off screen constitute a dream haul of collectables for any fan of Bond’s onscreen escapades over the past 60 years.

The film script collection is a part of a much larger archive of Ian Fleming and James Bond material, formerly a part of The Schøyen Collection. The significant private holding has been jointly purchased by Peter Harrington and Adrian Harrington Rare Books, and catalogued by Jon Gilbert, the world’s foremost authority on the literary James Bond and the author of the award-winning Ian Fleming: The Bibliography.

“When it comes to film collectables related to the James Bond movie franchise, this collection is an unparalleled and remarkably comprehensive archive of the birth and journey of Bond on the big screen. The collection has been enthusiastically curated by Martin Schøyen – a legend himself and one of the most respected private collectors of antiquarian books and manuscripts for almost 70 years now. It is a privilege to be involved in finding this remarkable collection a brand new home, one that is worthy of the effort gone into amassing this set of Bondiana and that pays fitting tribute to what is perhaps the most iconic and legendary film franchise of all time,” Pom Harrington, owner of Peter Harrington.

“The producers of the James Bond film franchise were aware of Martin’s archive. They indicated that nobody had attempted such a scholarly and focused approach to assembling material of this nature. Dr Schøyen’s collection, curated by me, has been commended by Ian Fleming Publications and the Estate of Ian Fleming. As Fleming’s bibliographer, I am unaware of such a wealth of original manuscript and typescript material in a private James Bond collection. With the 60th anniversary of the first Bond film approaching, now is a unique opportunity to acquire a magnificent collection,” Jon Gilbert, senior specialist and resident Fleming expert at Adrian Harrington Rare Books.

•    ‘The Birth of a Legend’ – Wolf Mankowitz & Richard Maibaum’s earliest draft screenplay for the first Bond film Dr. No, released in 1962.
•    Roald Dahl’s manuscript first draft screenplay for You Only Live Twice – which at 244 pages is the most substantial Roald Dahl manuscript to exist in private hands and come on the market in decades.
•    Storyboard sheets titled “Bond Pursues Vesper – Car Chase” from the 2006 Casino Royale film, visualising the memorable motor-pursuit through Montenegro of Le Chiffre by Bond, with Daniel Craig clearly sketched.
•    Screenplay for Warhead, an unrealised Bond film written between 1976-1978 that has been described by Martin Schøyen as “what would have been the best James Bond film up to that point, had it been produced.”
•    M.G. Carter’s unique colour Warhead set design, showing an underground chamber inside the Statue of Liberty, hiding mechanical sharks with nuclear warheads ready to be dispatched into the sewers of New York.
•    Manuscript lyrics written in full by Louis Armstrong for the song ‘We Have All the Time in the World’, from the 1969 film On Her Majesty’s Secret Service which made a poignant reappearance in No Time to Die. Signed by Armstrong and inscribed to his long-time manager Joe Glaser, “To Joe from Satch” with an additional humorous note “yea my debut song”. Lyrics written on the blank verso of a printed comedy weight-loss regime.
•    Extensive material and correspondence concerning the creation of the film Thunderball (1965) – an adaptation of the novel of the same name by Ian Fleming released in 1961, which in turn was based on an unrealised film treatment which Fleming had worked on with scriptwriter Jack Whittingham and film producer Kevin McClory between 1958-1960. The novel Thunderball was subject to a famous copyright dispute in 1961, when Whittingham and McClory took action against Fleming for not crediting them in the novel.
•    A carbon copy from Ian Fleming’s office of the annex to a second draft film treatment written by Fleming entitled “James Bond of the Secret Service”, in which the character of James Bond is outlined in tremendous detail, describing Bond as “… a blunt instrument wielded by a Government Department. He is quiet, hard, ruthless, sardonic, fatalistic. Audiences will tend to dislike him… In his relationship with women he shows the same qualities as he does in his job. He likes gambling, golf and fast motor cars. He has two suits, single breasted… His guns are a Barreta (sic)… He also uses a Smith & Wesson. His car is an open Bentley…”
•    Hand-drawn and hand-coloured watercolours by costume artist Gerald Moulin for the costume designs for ‘Commander James Bond’ in full Naval Commander dress (Tomorrow Never Dies) and ‘Xenia Onatopp’ in her disguise as a French Navy helicopter pilot (Goldeneye).
•    Autographed screenplay of Bond 18 (released as Tomorrow Never Dies), signed by “Bond” (Pierce Brosnan), “Carver” (Jonathan Pryce), “M” (Dame Judi Dench), “Q” (Desmond Llewellyn) and Raymond Benson who has additionally inscribed “I wrote the novelisation”.
•    Stunt co-ordinator Gerard Moreno’s copy of a production-used shooting script of License Revoked (released as License to Kill in 1988 – after a survey showed that 50% of Americans did not understand the term “revoked”).
•    An original vintage studio-issued press pack, issued by Warner Brothers in 1983 for the film Never Say Never Again. The pack contains cast and credit sheets, production information, biographies of the main characters as well as a full set of 17 black and white publicity stills housed in a colour-printed card folder.
•    A signed original concept drawing by production designer Syd Cain, illustrating a scene from GoldenEye featuring the Russian train, as seen near the end of the film, when the officers take off in the helicopter, leaving James Bond and Natalya Simonova to perish in a fiery train explosion. Sydney B. Cain’s career in the film business spanned some fifty years and he remains best known for his work in various design capacities on the 007 series, from Dr. No (1962) to GoldenEye (1995).