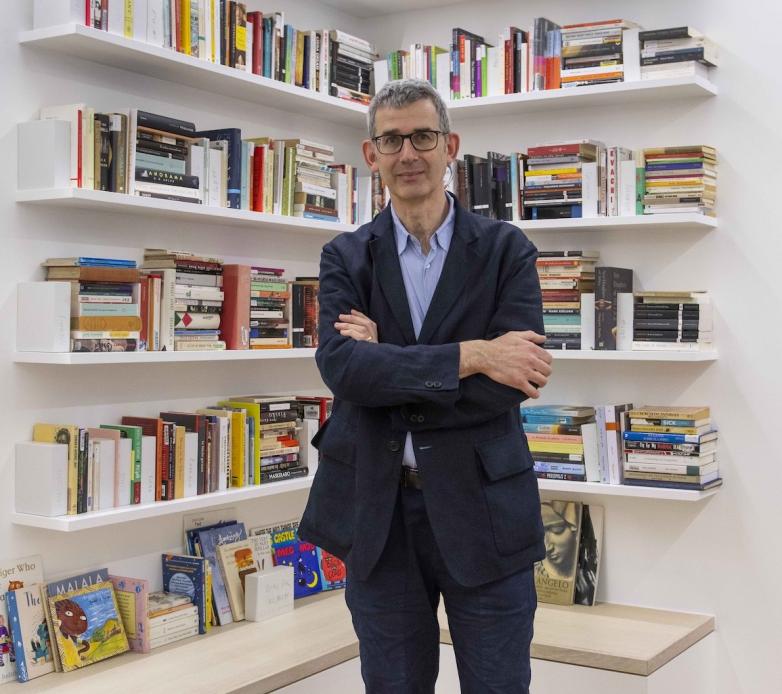 Credit: The Trustees of the British Museum

Edmund de Waal in his Library of Exile at the British Museum, 2020.

For those who have read The Hare with Amber Eyes, the name Edmund de Waal will be familiar. In the acclaimed memoir, the renowned ceramicist traces his family’s netsuke collection through the late nineteenth and twentieth centuries amid war and dislocation.

The idea of exile resonates with de Waal, whose family fled Vienna when their home and belongings were confiscated by the Nazis, and his latest project speaks to that. Library of Exile is an art installation at the British Museum that features the books of 1,500 writers from 88 countries who have experienced exile, among them Dante Alighieri, Chinese poet Aì Qīng, and Syria’s Samar Yazbek.

In a library press release, de Waal commented, “This library celebrates the idea that all languages are diasporic, that we need other people’s words, self-definitions and re-definitions in translation. It honors the words of André Aciman, himself an exile from Alexandria, that he understands himself ‘not as a person from a place, but as a person from a place across from that place. You are – and always are – from somewhere else.”

The walls of the Library of Exile are painted with liquid porcelain and inscribed with the names of the world’s lost libraries, from the Library of Alexandria to Mosul University Library in Iraq, which was decimated by ISIS in 2015. Once the installation at the British Museum closes, the books will be donated to the newly reestablished library in Mosul, with the help of Book Aid International.

After stops in Venice and Dresden, de Waal’s Library of Exile opened at the British Museum just as the world was closing due to Covid-19, but according to the museum’s website, it will reopen “later this summer.” The collection can also be explored through an online catalogue and a five-minute video tour: