On the Hunt for Rare Documents & Historical Treasures 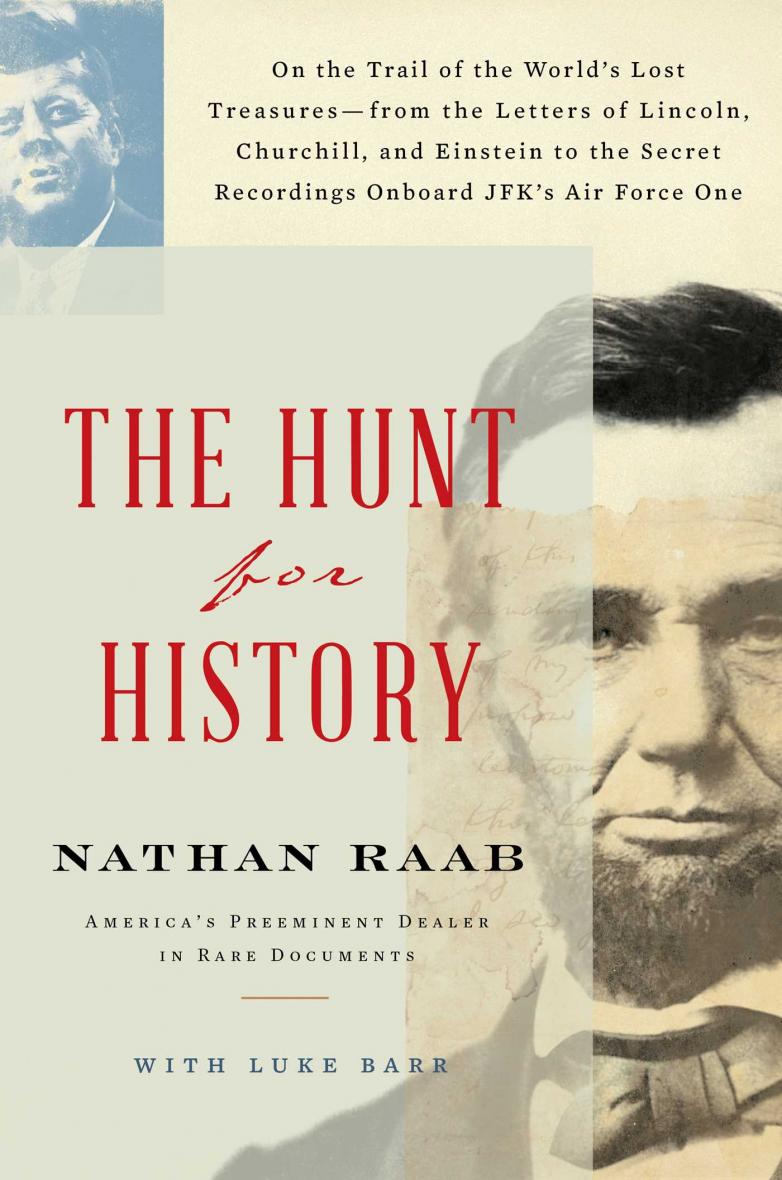 Today is “pub day” for ABAA bookseller Nathan Raab of Raab Collection. Nate’s book, The Hunt for History: On the Trail of the World’s Greatest Lost Treasures—from the Letters of Lincoln, Churchill, and Einstein to the Secret Recordings Onboard JFK’s Air Force One (Scribner, $30), is an utterly captivating look at the day-to-day life of a dealer in historical documents who has turned up major treasures from America's attics, basements, and country auctions. Since unlikely finds are exceedingly interesting for collectors, I asked Nate about his favorites—and about forgeries.

RRB: Your book discusses historical documents and objects that surface seemingly out of nowhere (attics, etc.). What do you say when people claim that all the great finds have already been made?

NR: That is clearly not the case. Just last week, we bought a letter of Thomas Jefferson that was unpublished. Though he had written about it in his summary journal, the contents were lost and the original not known to have survived. The reality is that history is hidden all over the world waiting to be discovered.

RRB: I particularly enjoyed reading about the famous forger, Robert Spring, since my husband’s grandmother bought one of his fake Washington checks in the 50s or 60s (and which we have on display in our home). How many forgeries do you see, say, in a month?

NR: The reality is that reproductions are a bigger issue for us than forgeries. Reproductions, particularly on glossy images, can be a challenge to detect without seeing the original. I probably see 5-10 forgeries a year by people who don't already know they are forgeries.

RRB: The Thomas Edison chapter also makes clear how tireless the research can be. Is that just part of the job for you?

NR: It's part of the job and part of the fun. When you are on the hunt for that information, the entire search can be exciting and fun, because it often leads you to better appreciate the importance of what you have.

RRB: Another theme is finding the right home for historic material, i.e. the Jefferson book being offered to the LOC first, or the Bredig archive going to the Science History Institute. Again, it takes the job of book dealer to another level. Why is that important to you?

NR: When possible, we like to find the most appropriate home for a document. That is not always possible, because of the amount of money involved and the limited budgets of some institutions. There are important examples of this, like placing the order to seize the Rosetta Stone with the British Library, where it belongs because their counterpart museum has the Stone itself. But most pieces don't fall into this category.

RRB: This book is chockful of amazing treasures, but if you had to pick one item that really knocked your socks off, so to speak, which one would it be?

NR: The hardest question to answer. That answer tends to change depending on the discovery of the day. I suppose the one that lingers most may be the order to seize the Rosetta Stone. Nowhere near the most expensive, but wow what a find! The most emotional had to be the archive of the scientist whose papers survived the Holocaust. I lived their lives, one letter at a time, and became friends with his grandson.