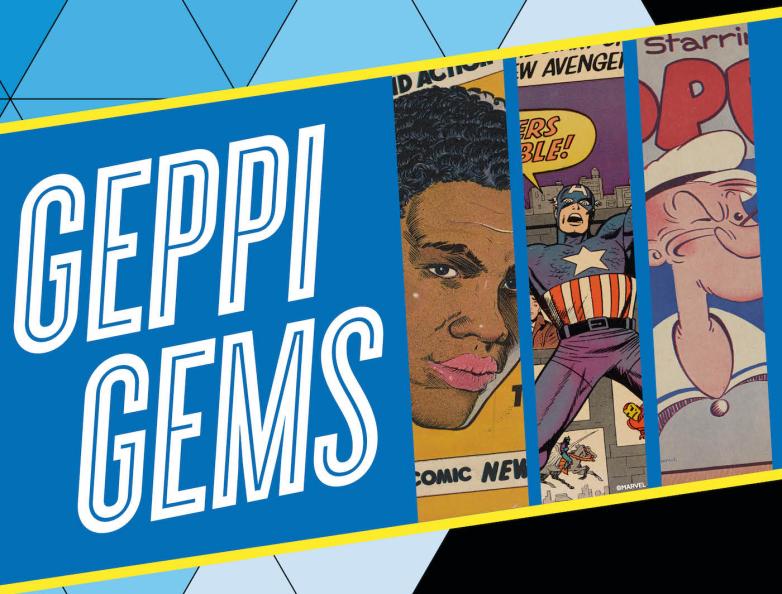 Washington, D.C. — A new exhibition at the Library of Congress explores how comic books have permeated popular entertainment and influenced U.S. culture, highlighting selections from the Stephen A. Geppi Collection that was generously donated to the national library in 2018.

“Geppi Gems” is now open in the Library’s Graphic Arts Gallery through mid-March 2022. A second rotation with different items is planned for spring 2022. The exhibition now features 33 items from the collection of more than 3,000 cartoons, comic books and related items in the Geppi Collection.

“Popeye, Superman, Wonder Woman, Black Panther — some cartoon characters have become both instantly and internationally recognizable, but they didn’t get their start on television or in the movies, but rather on the pages of newspapers and comic books,” said Sara Duke, curator of popular and applied graphic arts, who wrote about the exhibition on the Library’s Picture This blog.

The exhibition explores the role of early newspapers in the development of comic books and characters. As a nod to the collection’s founder, the exhibition also represents the major themes of the former Geppi Entertainment Museum in Baltimore, which operated between 2006 and 2018.

“It’s so gratifying to see more of the Geppi Gems collection made available to the public in this exhibition,” Geppi said. “This and future displays will continue to expose new fans to the rich artistic history of pop culture started here in the United States. I’m more excited than ever and want to take this opportunity to express my appreciation to my dear friend and Librarian of Congress, Carla Hayden, for her vision, as well as the curators and conservators who have worked so hard to make this possible.”

Over the years, Geppi has amassed one of the largest individual collections of vintage comic books and pop culture artifacts in the world.

Highlights of the exhibition include:
•    Popeye in an early syndicated newspaper comic strip from 1931 when the character’s popularity was exploding.
•    Mickey Mouse and Donald Duck during their rise in popularity as animated characters. Walt Disney understood the role of marketing his characters so that they would be instantly recognizable.
•    Annie Oakley, Wyatt Earp and Steve McQueen as characters from America’s Wild West translated from Western novels to radio, comics, film and television.
•    Superman’s history with Action Comics and the birth of the comic book superhero from DC Comics, along with examples from the history of Batman and Robin and Wonder Woman.
•    Black Panther’s self-titled debut from Marvel Comics in 1977 and the story of Captain America in The Avengers before he became one of the most popular comic book characters today.
•    Science fiction’s history in comics with examples of dramatic visual expression, including Weird Science and Science and Invention.
•    Terrifying creatures of horror that were brought to visual life through comics in magazines like Creepy.
•    Sports as represented through comic books and cartoon art, including Babe Ruth Sports.
•    Pop culture represented in posters, magazines and collectibles promoting musicians through graphic art, including Elvis Presley, Jimi Hendrix, The Jackson 5 and more.

Free timed entry tickets are available for visitors to the Library’s Thomas Jefferson Building on Wednesdays, Thursdays, Fridays and Saturdays between 10 a.m. and 4 p.m. To plan a visit and reserve tickets, go to loc.gov/visit. Tickets will be released on a rolling 30-day basis. For online versions of the Library’s exhibitions, visit loc.gov/exhibits.