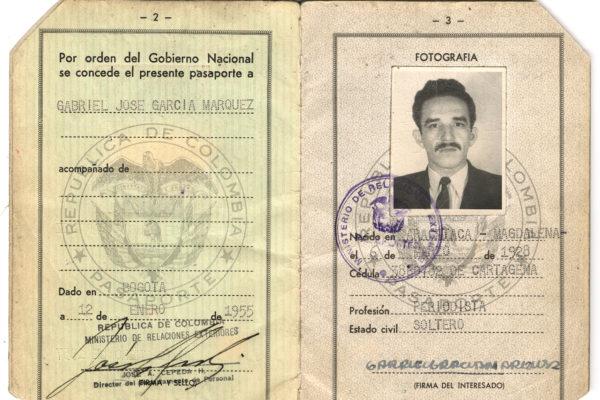 Austin, TX — Selections from the archive of internationally renowned and Nobel Prize-winning author Gabriel García Márquez (1927–2014) will be on view for the first time during an exhibition opening Feb. 1 at the Harry Ransom Center at The University of Texas at Austin. The exhibition then will open in the fall at the Museo de Arte Moderno in Mexico City.

The bilingual exhibition, Gabriel García Márquez: The Making of a Global Writer, examines how the Colombian author who won the Nobel Prize for literature in 1982 became an international success soon after the publication of his 1967 novel, One Hundred Years of Solitude (Cien años de soledad). Now translated into more than 45 languages, the book has worldwide sales approaching 50 million copies.

“García Márquez is a ‘global’ writer because his stories continue to enter the lives of millions of readers worldwide every year,” curator Álvaro Santana-Acuña of Whitman College, said. “Generation after generation, readers find in his works, characters, situations, events, feelings, memories… that are meaningful to them. His writing has attracted all kinds of readers, including Oprah Winfrey, former President Bill Clinton, Colombian pop star Shakira, Henry Louis Gates, James Patterson and many others.”

Born in Colombia, García Márquez began his career as a journalist in the 1940s, reporting from Bogotá and Cartagena and later serving as a foreign correspondent in Europe and Cuba. In 1961, he moved to Mexico City. He is the author of numerous novels, including Chronicle of a Death Foretold (1981) and Love in the Time of Cholera (1985), in addition to novellas, short story collections and screenplays.

“What makes this García Márquez novel so famous is the fact that not only does it have millions of fans around the world, but also many critics,” Santana-Acuña said. “Classics are classics because they are the preferred target of critics, too; and One Hundred Years of Solitude continues to receive both praise and criticism.”

Throughout his life, García Márquez’s family, friends and politics played a pivotal role in shaping his writing. The exhibition will highlight the author’s transformation into a literary legend and will feature manuscripts, photographs, videos and correspondence demonstrating the impact of his personal life on his most important works. Pulling largely from the Gabriel García Márquez Papers at the Ransom Center, the exhibition will give visitors the opportunity to see documents never shown publicly before and to learn more about the life of one of the most influential people of the 20th century.

“As this exhibition demonstrates, Gabriel García Márquez made the local universal and, in doing so, became a citizen of a republic of letters larger than his native Colombia, larger than his adopted home of Mexico, and larger even than all of the Americas, north and south,” Ransom Center Director Stephen Enniss said. “My colleagues and I are delighted to share the story of the making of One Hundred Years of Solitude, which is also the story of the making of Gabriel García Márquez.”

The author’s personal archive was acquired by the Ransom Center in 2014 and includes original manuscript material, predominantly in Spanish, for 10 books, from One Hundred Years of Solitude (1967) to Love in the Time of Cholera (1985) to Memories of My Melancholy Whores (2004); more than 2,000 pieces of correspondence; drafts of his 1982 Nobel Prize acceptance speech; more than 40 photograph albums documenting all aspects of his life over nearly nine decades; the typewriters and computers on which he wrote some of his most beloved works; and scrapbooks meticulously documenting his career via news clippings from Latin America and around the world.

Even the most knowledgeable readers will be surprised by this exhibition, Santana-Acuña, said. This is an exhibition that tells the story of how he brought these wonderful stories to us. The influence of writers like William Faulkner, Ernest Hemingway, Virginia Woolf, Julio Cortázar, and James Joyce on García Márquez’s work will be evident, as the manuscripts of some of their famous works are also on view along with his works.

Visitors will learn personal details about his friendship with former Cuban leader Fidel Castro and other political leaders. A glimpse into the author’s creative process through multiple versions of his novels will bring visitors behind the scenes and beyond the finished novel.

Since the García Márquez archive opened for research in 2015, it has become one of the Ransom Center’s most frequently circulated collections. In 2017, the Center published more than 27,000 images of manuscripts and photographs from the collection, creating the Gabriel García Márquez online archive with the support of a Digitizing Hidden Special Collections and Archives grant from the Council on Library and Information Resources through the Andrew W. Mellon Foundation.

Gabriel García Márquez: The Making of a Global Writer will be on view through July 19. Galleries are open 10 a.m. to 5 p.m. on weekdays, with extended hours until 7 p.m. on Thursdays, and noon to 5 p.m. on weekends. Docent tours will be held every day at noon, with additional evening and weekend tours, and Spanish-language tours will be offered Saturdays at 1 p.m. Admission and tours are free.