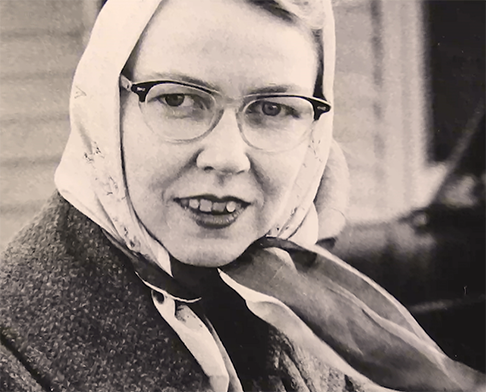 Image from Flannery, a new film directed by Elizabeth Coffman and Mark Bosco on the life of author Flannery O’Connor.

The Library of Congress announced yesterday the winner of its first annual Library of Congress Lavine/Ken Burns Prize for Film is Flannery, a film about National Book Award winner Flannery O’Connor. Directed by Loyola University professor Elizabeth Coffman and Jesuit priest Mark Bosco, the documentary chronicles the life of the Georgia author known for her provocative, Southern Gothic fiction (and a penchant for peacocks). The filmmakers will receive a $200,000 finishing grant.

From eighty submissions, the winner was selected by the Librarian of Congress Carla Hayden in consultation with filmmaker Ken Burns.

“Flannery is an extraordinary documentary that allows us to follow the creative process of one of our country’s greatest writers,” said Burns. “It also provides us a glimpse into her life, including her Catholic faith, her unusual sensitivity to race as a Southern white woman and her daily struggles with illness and the prospect and reality of an early mortality. The story is beautifully told and captures the power of her Southern birth and life. We’re hopeful that a new generation of readers will rediscover the writings of Flannery O’Connor because of this film.”

You can watch the trailer here; or read more about the film and its makers.

Relatedly, a collection of more than 100 unpublished letters from O’Connor and her circle of friends (Walker Percy, Katherine Anne Porter) has just been published. Titled Good Things Out of Nazareth, the volume “explores such themes as creativity, faith, suffering, and writing.”