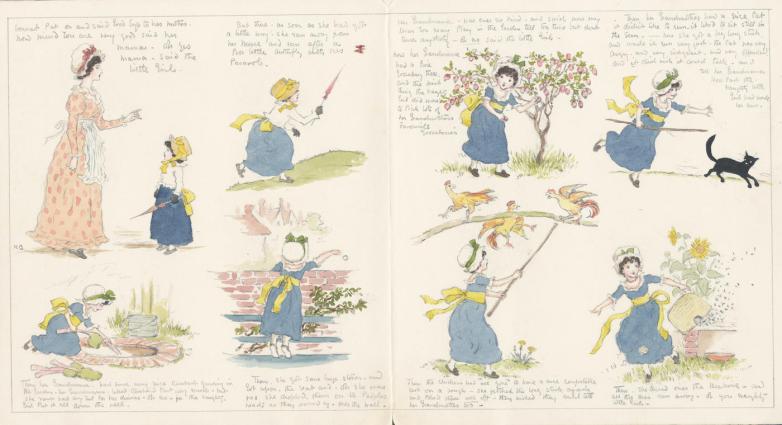 March is women’s history month, which prompts an annual uptick in auction and bookseller offerings of ‘women’s books’ and related topics. Bonhams, for example, is hosting a “Women Through History” sale in London on March 23. Highlights include a Jane Austen letter, Margot Fonteyn’s pointe shoes, and a large collection of suffrage material, but the twenty-four lots that caught my attention focus on Kate Greenaway and derive from the collection of the late British bookseller Thomas Schuster.

Schuster, who died in 2013, was based in Maddox Street in London. His interest in English children’s literature spurred him to collect Lewis Carroll, Beatrix Potter, and Greenaway, the latter of whom he became an expert on, culminating in Printed Kate Greenaway: A Catalogue Raisonné in 1986. Greenaway (1846-1901) was born into a struggling artistic family—her father was a wood engraver—that fostered her curiosity and talent, sending her to several art schools. She published her first drawing in a book called Infant Amusements in 1867 and went on to illustrate many books, including a beloved edition of Robert Browning’s Pied Piper of Hamelin (1888). In the UK, the Kate Greenaway Medal is awarded annually to a children’s book illustrator whose artwork “creates an outstanding reading experience.” 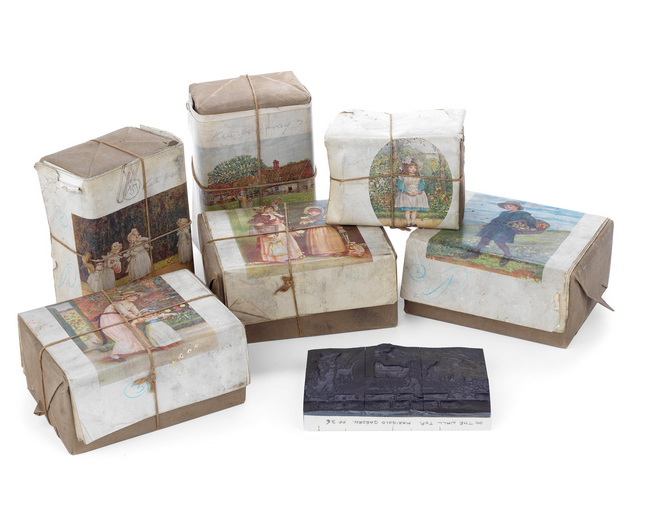 Two lots’ worth of printing blocks (here and here; one group pictured at left) used for Marigold Garden, ca. 1885-1905, manifest the physical aspects of making Greenaway's books and might hold particular significance considering her father’s line of the work. According to Bonhams, the publisher used chromoxylography, an inexpensive color-printing technique widely used at the time.

Another fun find is a booksellers’ bundle of 50 copies of an 1884 almanac with color illustrations by Greenaway, most as new as the day they were issued and still in brown paper packaging, estimated at £300-500 ($400-670). Another such lot contains 106 copies of Greenaway’s Alphabet, ca. 1885.