Ernest Hemingway: Down For The Count 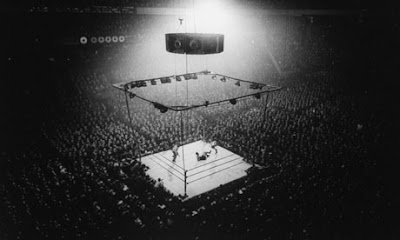 In 1922, Heavyweight Champion Jack Dempsey was the toast of Paris. He was feted and fawned over, the women obliging, the men in awe.

Champion for three years, he was used to celebrities wanting to put the gloves on and spend a fantasy few minutes sparring with him. A fighter who took all that occurred within the ring with extreme seriousness - it is not a playground1 - he nonetheless indulged many: he allowed silent film star Douglas Fairbanks to throw jabs and rights at him, knowing that Fairbanks' smaller frame and lesser weight would not put much power behind his punches, if they connected at all. Singer Al Jolson put the gloves on with Dempsey and, being an aggressive fool, made the bad decision to get cute and throw a punch that had some stream in it. After he woke up, he was forever afterward proud of the scar on his chin, bearing it as a badge of honor; Dempsey had reflexively countered but, being a gentleman, was horrified and apologetic.

There were more than a few in Paris that year who stepped into the four corners with the Champ for a light dance around the squared circle. They were no threat.

There was one person in Paris that year whose desire to get in the ring with Dempsey would not be indulged. Ernest Hemingway was a threat. Not to Dempsey but to himself.

As Roger Kahn, in his biography of the champion, A Flame of Pure Fire, reported Dempsey's side of the story: "'There were a lot of Americans in Paris and I sparred with a couple, just to be obliging,' Dempsey said. 'But there was one fellow I wouldn't mix it with. That was Ernest Hemingway. He was about twenty-five or so and in good shape, and I was getting so I could read people, or anyway men, pretty well. I had this sense that Hemingway, who really thought he could box, would come out of the corner like a madman. To stop him, I would have to hurt him badly, I didn't want to do that to Hemingway. That's why I never sparred with him.'"

Hemingway had delusions of competence. He often boasted to interviewers that he was "a good semi-professional boxer." He was nowhere near so. 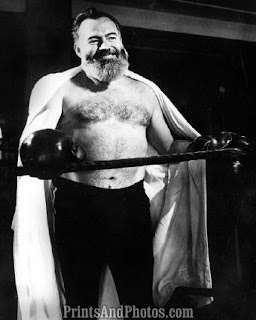 In 1948, Hemingway, then forty-nine, challenged Brooklyn Dodger relief pitcher Hugh Casey, a guest at Hemingway's Havana retreat, to get in the ring with him. In his living room. Casey, without any boxing experience whatsoever, dropped Hemingway, who crashed into a glass-topped table on his way to horizontal.

On another occasion, related by George Plimpton in his story, Ring Around the Writers, Hemingway insisted that his friend, former Heavyweight Champion, Gene Tunney, get in the ring with him. Hemingway presumed too much but was saved by Tunney's sportsmanship and control: Countering a Hemingway punch thrown with a little too much seriousness given the situation, Tunney ripped a straight right but pulled it just an angstrom unit away from Hemingway's face, the clear message being, "you were that close to having your head handed to you and it is only because I am merciful that you are not currently residing on Dream Street."

"In those days," novelist Morley Callaghan recalled in That Summer in Paris, his memoir of a season in 1920s France and his friendship with Hemingway, "He liked telling a man how to do things." The kid's in his mid-twenties and he's telling other man-children how to do things. Hemingway loved boxing, hung around gyms, and tried to box with someone, anyone at every opportunity. But the reality, according to Callaghan, who had done some boxing himself, was that, "we were two amateur boxers. The difference between us was that he had given time and imagination to boxing; I had actually worked out a lot with good fast college boxers." In other words, Hemingway was lost in the romance of a sport that has no romance to those seriously pursuing it; the romance strictly belongs to spectators.

"My writing is nothing," he once averred to writer Josephine Herbst in all sincerity, "my boxing is everything." Good thing he didn't quit his day job.

Callaghan and Hemingway boxed together quite a bit that summer. Callaghan may have been being generous when he called Hemingway an amateur. He remembers that his wife would complain that he always came home with bruised shoulders after sparring with Hemingway. Callaghan would laugh in response, explaining that the shoulder welts and bruises meant that Ernest had always missed his jaw, nose, or mouth. Against someone who had any sense of what they were doing, Hemingway, apparently, couldn't hit the broad side of a barn or fight his way out of a wet paper bag.

Once, the two sparred, and, as Callaghan recalled, "he did something that astonished me." Continually being tagged by Callaghan's left jab and unable to counter or beat him to the punch with his right, Hemingway was taking a slow, steady shellacking, his mouth bleeding, his lips split open. "It must have been exasperating for him." Particularly as Callaghan was five inches shorter and lighter than Ernie The Oak Park Pretender Hemingway.

"Courage is grace under pressure," Hemingway famously declared. Under intense pressure to keep his oversized ego from circling the drain and self-image flushing down the toilet, Hemingway then "loudly sucked in all the blood. He waited, watching me, and took another punch on the mouth. Then...he stiffened. Suddenly he spat at me; he spat a mouthful of blood; he spat in my face."

"That's what bullfighters do when they're injured. It's a way of showing contempt," Hemingway offered as lame excuse for this cross-culturally acknowledged insult, an affront so profound it is an invitation to violent response. So much for sportsmanship.

I, admittedly, know little about bullfighting but my guess is that when a bull is frantically twirling a toreador on one of his horns like a plate-spinning Vaudeville act, the only reason blood is running out of the bullfighter's mouth is because he's been gored in the abdomen, and the only contempt he may be feeling is for himself, for his stupidity while he, panicked and afraid, ruefully contemplates death.

Suffice it to say, had Hemingway gotten into the ring with Dempsey and pulled that nonsense, Papa would have wound up a paragraph in Le Monde's obit section, his novels never written. Too bad it didn't happen. The Western world's men would have been spared a lot of grief by the twentieth century's greatest master of macho baloney. "A little less machismo, a little more pianissimo," as Book Patrol library correspondent, Nancy Mattoon, dryly notes of Hemingway.

Later, Hemingway and Callaghan sparred again. F. Scott Fitzgerald, in awe of Ernest, was present as timekeeper, a chore he knew nothing about. Hemingway was, yet again, on the receiving end of Callaghan's left jab, bleeding, and not looking like the god that Fitzgerald (and Hemingway) imagined him to be. During the one-minute break, Hemingway noticed that Fitzgerald was stricken. When F. Scott rang the bell for the next round, Hemingway came out like a bull, throwing wild, wide punches. Then "Ernest, wiping the blood from his mouth with his glove, and probably made careless with exasperation and embarrassment from having Scott there, came leaping at me. Stepping in, I beat him to the punch...I caught him on the jaw; spinning around he went down, sprawled out on his back," Callaghan reported.

Fitzgerald was aghast; he'd mistakenly let the round go an extra minute. He admitted this to Hemingway, who promptly laid into him, unmercifully accusing Fitzgerald of deliberately allowing the round to go overtime so that that he could "see me getting the shit knocked out of me." Grace under pressure...

Hemingway's embarrassment and resentment would negatively affect his friendships with Callaghan and Fitzgerald. There is a name for someone who behaves so atrociously after honest defeat: sore loser.

Hemingway also fancied himself an amateur bullfighter. As there is no record of his blood being spilled, it is reasonable to conclude that the bulls he was fighting were not wearing boxing gloves.

It may be that as he aged and all the psychic armor he'd been donning piece by piece in youth like multi-layered underwear against the cold began to fall off in tatters, he was left naked and shivering. His body was breaking down, his robustness bust. He was no longer the a man he wished to be. So he knocked himself beyond next week into the next life. So much for grace under pressure, the only real grace being if feces don't run down your pants leg during extreme duress, cool equipoise occurring only in novels, particularly those of you know who.

Hemingway was, by all accounts of those who truly knew him, a soft, sensitive and sentimental young man. He went to enormous lengths bordering on travesty to mask it. "It was amusing to remember the Hemingway who had first come to Montparnasse," Callaghan wrote. "Ask anybody. Why had he been wearing those three heavy sweaters to make himself look husky and powerful? A ridiculous giveaway." He was a victim of his own warped sense of virility, an insecure artist's sense that what he is doing is perhaps feminine in nature, God help him, and rather than balance it, go overboard and, in the end, drown. Writer and publisher Robert McAlmon claimed that a "scandalous incident" transpired between him and Hemingway early in the future Nobelist's career. McAlmon was a homosexual. Whether true or not, the mere rumor must have driven Hemingway to throw on a few more sweaters no matter how uncomfortable the fit.

Let us now officially deep-six the Hemingway fantasy of people growing "strong in the broken places." That nonsense is strictly for bones. In the real world, the psychic wounds we bear remain weak at the break, they never heal, they never scar. They remain as hard scabs that when scratched or rubbed will bleed again, the blood-run slow or fast depending upon the how forceful the scratch or rough the rub. Or how we pick at it, ourselves. Time may heal all wounds but for most of us there isn't enough of it. Hemingway was a deeply wounded man. No crime in that. The felony is in the fallacy of his writing.

Earnest Hemingway was an innovative stylist but not an honest writer. Rather than examine the uncomfortable realities of manhood and masculinity in his work, he evaded them, avoiding the inner exploration that would have been necessary to discover truth. In its stead he created a romanticized, wishful thinking vision of virility that plagued his and successive generations of men with an impossible standard that even he could not bear.

My Grandfather, a huge man in an era when few were that size and quite handy, once dropped heavyweight contender, Harry Krakow aka Kingfish Levinsky, with a single punch that laid him out cold on the street for wolf-whistling and cat-calling my grandmother. Poppy could have taken out Papa in a blink; he was the toughest man I've ever known and I've known more than my share. I did some amateur boxing when I was young, dumb and made of rubber. Compared to my grandfather, I'm a cream puff. But even I could have put Hemingway on the horizontal express.

1. As Thomas Hauser, the best writer on boxing of our and, perhaps, any generation has noted with devastating acuity: "People play baseball, they play football, tennis, basketball, hockey, they play a lot of sports. Nobody plays boxing."