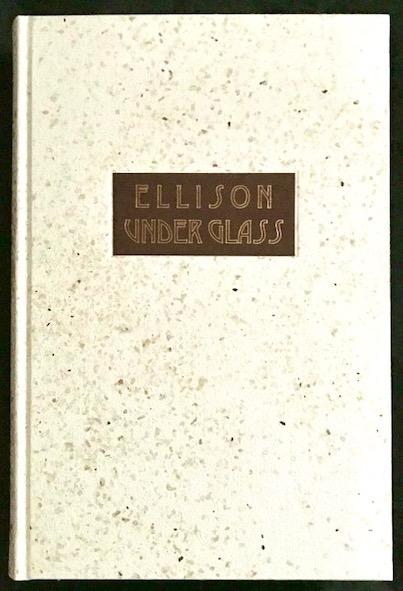 Charnel House, longtime publisher of artfully designed limited editions in Catskill, New York, has released Ellison Under Glass, a collection of stories written mostly in bookstore windows, hence the Calvino-esque title. Typing away in bookstore windows was something Harlan Ellison became known for, and it resulted in stories like “Objects of Desire Are Closer than They Appear,” written at Dangerous Visions bookstore in Los Angeles in 1998, and “The Diagnosis of Dr. D’Arqueangel,” written at London’s Words & Music, on Charing Cross, in 1976.

Collected here for the first time are twenty-nine such stories on thick paper with wide margins, striking typography, black and white photo illustrations, and decorative endpapers. The unsigned edition of 250, which retails for $200, beautifully evokes the “glass" theme, bound as it is in handmade paper embedded with glittering mica chips. 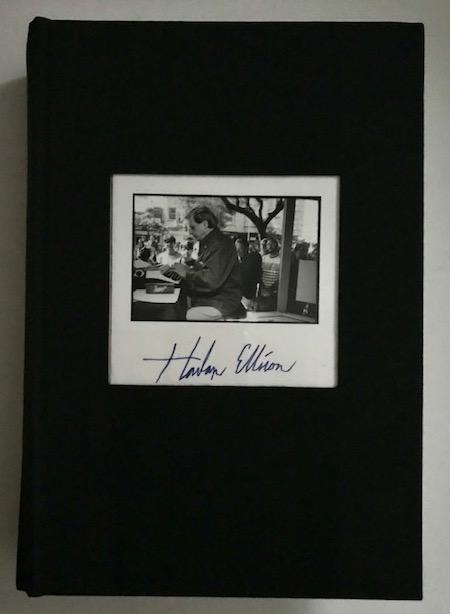 A signed, numbered “window” edition of 100, bound in black Japanese silk with a silver gel print of Harlan writing in a bookstore window and his handwritten signature under UV glass, is available for $750. The most deluxe version is signed and lettered, of which only nineteen are for public sale at $1,500, is bound in red Japanese silk, each with a different silver gel print and Harlan’s signature embedded in the window.

Charnel House was founded in 1989 by Joe Stefko. Back in 2012, we profiled Stefko, intrigued by his pivot from rock 'n’ roll drummer (for Meat Loaf and The Turtles) to publisher of limited editions. He told us then that it all began when he was on the road with Flo and Eddie of The Turtles.

“The three of us got into collecting,” Stefko said. “It was my first exposure to modern limited edition books. It was the time when Stephen King made the whole limited edition thing commercial, and the quality of the signed limited editions was worse than the trades from the major publishers; they were clearly selling autographs and spending as little as possible on the books. I had already started collecting more antiquated books and saw that the limited edition was nothing new, and in fact used to be a very special art piece. I wanted to continue that art.”

Which is what he has done, starting with deluxe editions of Dean Koontz, Stephen King (as Richard Bachman), and Tim Powers, handcrafted in silk and leather. Charnel House has published Ellison before, too, e.g., limited editions of Flintlock and The Glass Teat & The Other Glass Teat Omnibus. The two met once in 1967 and then again in 1984 when Stefko, on tour with The Turtles, and his bandmates drove to Ellison’s house and struck up a friendship destined to last 35 years.

Ellison Under Glass, their last collaboration, was important to the author, who died in 2018. “Although he didn’t live long enough to see it, he knew it would be done and he was happy about it. Harlan had a lot of trust in me,” said Stefko.