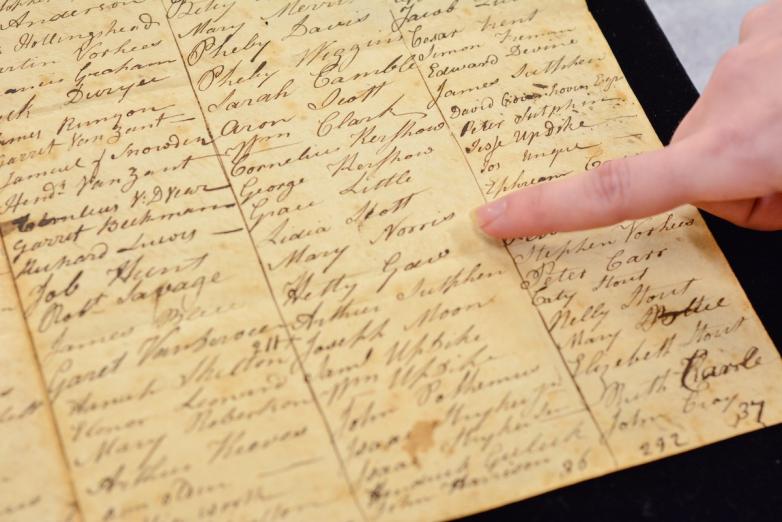 Name of a woman voter on the 1801 Montgomery Township Poll List from the New Jersey State Archives.

On Election Day, it is especially important to remember that the U.S. is in a constant state of evolution when it comes to voting rights. Contrary to what you might have learned in school, all Americans haven’t been free to vote since winning independence from England. As originally conceived, the U.S. Constitution gave full rights only to white, land-owning men over the age of 21.

New Jersey, however, had different ideas. Its state legislature opened elections to all free property owners, no matter their color or gender. That law was rescinded in 1807, when NJ fell in line with the rest of the nation and restricted suffrage to propertied white men. Black men were denied the vote until after the Civil War, though many were still disenfranchised by poll taxes, literacy tests, and intimidation for another hundred years. Women waited until 1920, and Native Americans until 1924.

It is that one sliver of time from George Washington’s reign through Thomas Jefferson’s that the Museum of the American Revolution in Philadelphia focuses on in its new exhibition, When Women Lost the Vote: A Revolutionary Story, 1776-1807. Featuring more than sixty-five manuscripts, works of art, and historical artifacts, the “cheekily titled” exhibition unearths the stories of women and free people of color who lived—and voted—in this more enlightened period. Recently discovered poll lists, such as the one pictured above, which show 163 female voters and four Black male voters, are the primary draw. According to the museum, “Prior to this discovery, little proof of women or people of color voting during this period was known to exist.”

A free, online version of the exhibition is scheduled to launch imminently. The physical exhibition remains open through April 25, 2021.