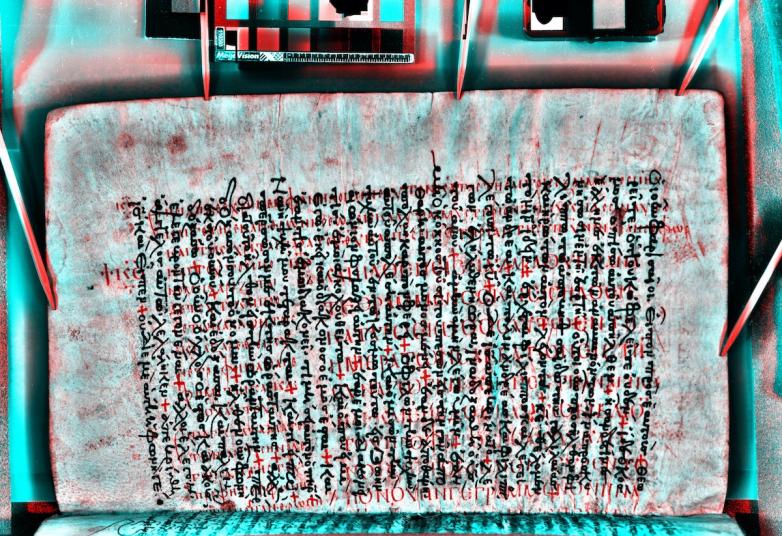 A digital edition of the 8th-century Codex Zacynthius, launched by the University of Birmingham’s Institute for Textual Scholarship and Electronic Editing and Cambridge University Library, is now freely available in full for the first time.

The Codex Zacynthius is a palimpsest, with the oldest level containing an 8th-century copy of St Luke’s Gospel (only parts of the first eleven chapters survive) with a marginal commentary. At the end of the 12th century, it was replaced with a lectionary of the New Testament. Both texts are in Greek. The Codex is the oldest copy of the New Testament to contain a commentary written in the margins.

Gifted in 1820 to an English army general on the Greek island of Zante, it was donated to the British and Foreign Bible Society and then bought by Cambridge University Library in 2014 for £1.1 million following a public fundraising campaign. As part of a two-year digitization project run by Professor David Parker and Professor Hugh Houghton at the University of Birmingham, specialists from the Early Manuscripts Electronic Library created high-resolution images of each page taken under different wavelengths of light to make the original text visible.

The 8th-century manuscript includes commentaries on Luke by the 4th-century Bishop Titus of Bostra and 5th-century Patriarch Cyril of Alexandria, as well as thirty-eight lengthy extracts from the theologian Severus of Antioch whose books were banned by the emperor Justinian.

“We are delighted that this project has been so successful in enabling this important manuscript to be read once again, and to take its place in scholarship on the transmission and interpretation of the New Testament in the early Church," said Professor Houghton.

The Codex Zacynthius will be featured in a forthcoming exhibition due to open in November 2020, Ghost Words: Reading the Past, focusing on palimpsest manuscripts at Cambridge University Library.