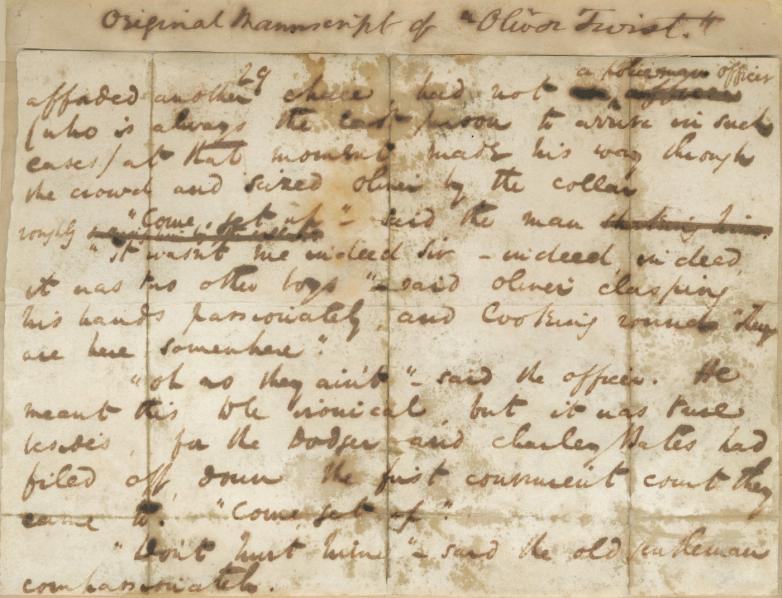 The intriguing story of how Oliver Twist literally set Charles Dickens’ pulse racing is recounted in a new exhibition at the Charles Dickens Museum in London.

More! Oliver Twist, Dickens and Stories of the City features previously unseen background material in its exploration of one of the writer’s most popular novels, including a page of Dickens’ original handwritten manuscript written in his study at the Georgian townhouse in Doughty Street where the museum is located. Also on display are some of the author’s letters (including detailed instructions to his publisher and illustrator George Cruikshank), as well as previously unseen lockets exchanged by the author and his sister-in-law containing locks of their hair.

Oliver Twist was first published chapter-by-chapter in issues of the literary magazine Bentley’s Miscellany between 1837 and 1839 under the writer’s pen name, Boz. Dickens regularly performed sections from the novel on his grueling reading tours from 1853 onwards. However, he only included the shocking Sikes and Nancy murder scene on his 1868 farewell tour of the U.S. and Britain, and then only reluctantly after first giving a test preview to friends and critics at his home – a letter to his friend Thomas Beard inviting him is on display in the exhibition.

But the passionate readings also had a significant impact on Dickens himself who often found himself overcome after performing certain scenes. Notes from his doctor for March 8, 1870, also on show here, confirm this. “Pulse before reading ‘Boots at the Holly Tree’; 94; After reading 112. After reading ‘Nancy & Sykes’ (the murder), 120. After reading ‘Bob Sawyer’s party’ 108, 15 minutes after, 82.”

Although Dickens’ specially produced reading copy of ‘Sikes and Nancy’ has been lost, he lent it to the actress Adeline Billington who also performed his work at recitals, her original transcription, containing Dickens’ underlining and additions in the margins such as ‘Murder Coming!!’ and ‘Terror to the End!’, is included in the exhibition.

To accompany the show, the museum has put together a self-guided walking tour to sites in the area with Oliver Twist connections such as Clerkenwell Green (where Mr. Brownlow is robbed) and Saffron Hill (the location of Fagin’s den).