Cuddly as a Cactus: Four Grinch Storyboards Sold at Auction 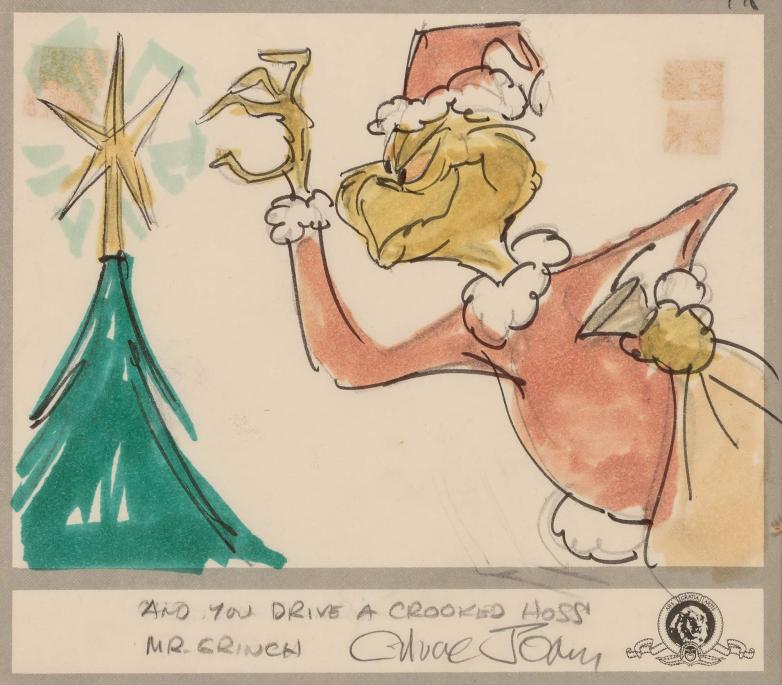 Yesterday, an appropriately snowy day in New York City, Doyle sold a group of four Chuck Jones storyboards from the 1966 classic, How the Grinch Stole Christmas! In the run-up to the holiday season, the bidding bypassed the $3,000-5,000 estimate and landed at $8,750. These original storyboards are, according to the auctioneer, “quite uncommon at auction.”

Jones, a beloved cartoonist and animator, had worked with Ted Geisel (Dr. Seuss) on a Warner Brothers cartoon during World War II. It was his idea to adapt Grinch, originally published in 1957, into an animated film. Produced by The Cat in the Hat Productions and MGM and underwritten by CBS, the special debuted on December 18, 1966 and ran annually until 1988. It is still considered a holiday standard for many viewers, even though updated versions have since appeared in 2000 and 2018.

The storyboards, executed in pencil, marker, and watercolor, are annotated with the companion text in the lower panel and signed by Jones. The four seen at auction depict the sequence in which the Grinch steals the star from the Christmas tree (lettered "And you drive a crooked hoss, Mr. Grinch"), then forces the tree itself up the chimney ("'And now!' grinned the Grinch 'I will stuff up the tree'"), follows the tree and presents ("Then he went up the chimney, himself, the old liar") and finally grabs the Yule log ("The last thing he took was the log for their fire!").