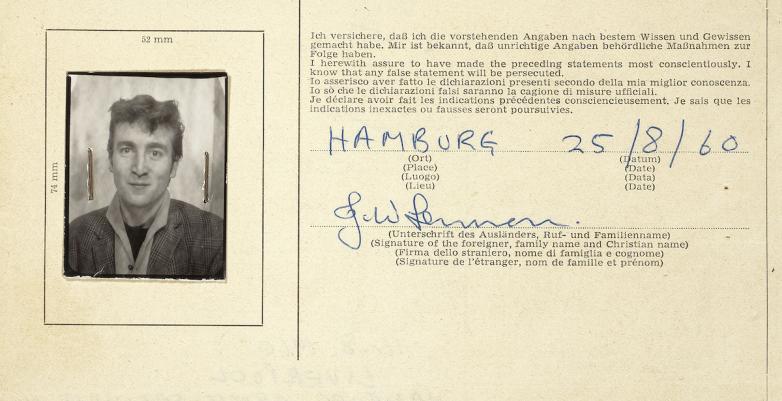 The Beatles/John Lennon: An Important Group of early documents including John Lennon's permits relating to the Beatles' historic trips to Hamburg sold for £137,750

London — A collection of unseen letters, drawings, work permits and photos relating to The Beatles time in Hamburg in 1962 and their relationship with Astrid Kirchherr achieved spectacular results at Bonhams Entertainment Memorabilia Sale, Knightsbridge on 5 May.

All of the 17-lot Collection sold, making a total of £383,823 which was double the low estimate. The top lot of the Beatles Hamburg collection, and the sale as a whole, was a group of early documents including John Lennon’s permits relating to his visits to Hamburg which sold for £137,750.

Director of Bonhams’ Entertainment Memorabilia Department, Katherine Schofield said: “The Beatles legacy is a strong as ever and today’s exceptional result proved that. The time they spent in Hamburg shaped them as both musicians and men, so to offer such a personal insight into this period of growth and the relationship they had with Astrid Kirchherr was an honour. Naturally, we are delighted that the collection sold so well and that the sale as a whole achieved a great result.”

Arguably Hamburg rather than Liverpool was the city that made the Beatles. It was here in the north German seaport where the group played more than they ever did at the Cavern Club in their home city. Astrid Kirchherr, a great friend of The Beatles during this time, was a photographer and best known for her stark black-and-white portraits of the Beatles taken in Hamburg before they were famous. She is credited with influencing the group’s style and signature ‘mop-top’ haircuts.

Other highlights from the Collection:

Also part of the sale was a collection of guitars, signed posters, and music-world mementoes belonging to world-renowned music promoter and producer Harvey Goldsmith CBE. The top lot of the collection was a multi-signed Les Paul Gold Top Guitar signed at Bob Dylan’s The 30th Anniversary Concert which sold for £27,750.

Other highlights from The Harvey Goldsmith Collection include: