Byron & the Brontës on Display 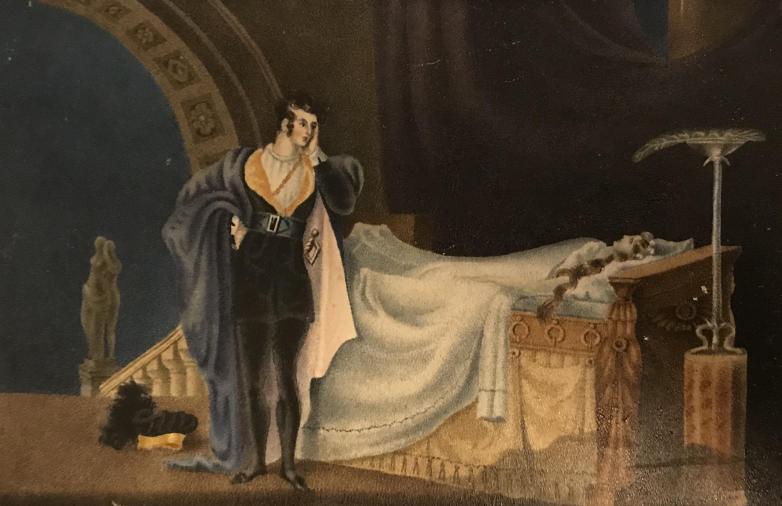 A watercolor painting by Charlotte Brontë currently on view at Newstead Abbey.

Newstead Abbey in Nottinghamshire, England, the now publicly owned ancestral home of Lord Byron, has just opened a new exhibition of objects on loan from the Brontë Parsonage Museum in Haworth showing the influence that Byron had on the Brontë family who grew up in the years after his death in 1824.

On display is a first edition of The Tenant of Wildfell Hall, Anne Brontë’s second novel which has a distinctly Byronic chief male protagonist, and Branwell Brontë's notebook from his time working at Luddendenfoot railway station in Calderdale, filled with poetry and sketches that includes examples of his interest in boxing, which Byron also enjoyed.

Also on show is a lovely watercolor painting by Charlotte Brontë, a copy of The Atheist viewing the dead body of his wife by Alfred B Clayton. “The central figure has been utterly Byronified,” said Simon Brown, curator at Newstead Abbey. The exhibition runs until April 2020.

At the Brontë Parsonage Museum itself, the Patrick Brontë: In Sickness and In Health exhibition presenting the medical life and times of the siblings’ father runs until January 1 and includes Anne’s blood-speckled handkerchief, Patrick’s carefully annotated medical manuals, and the family’s spectacles.

And finishing at the end of October this year at the parsonage is the Shall Earth No More Inspire Thee audio experience featuring ten of Emily Brontë’s poems set to music by Adrian McNally and sung by popular folk group The Unthanks. Listeners can enjoy the music on headphones as they take a circular walk through the churchyard and onto the moors towards Penistone Hill, close to the parsonage.