Button, Button, Who's got the Button? 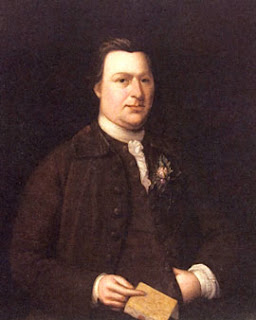 I confess I was utterly flummoxed (and more than a little disappointed) this morning to find not a single Google News result for yesterday's sale at Sotheby's of the fabulous letter signed by Button Gwinnett and five other Signers. The AP ran a short piece on the sale of a first edition of the 1790 Census signed by Jefferson (which made more than expected, selling for $122,500 to a private collector), and a Canadian reporter wrote about the lower-than-expected prices on several documents linked to Canada, but the Button Gwinnett result didn't even get that. Hopefully the reporters are just still digging to find out the buyer, and will file stories soon. We'll see.

The sale is certainly newsworthy. Somebody (I don't yet know who), paid $722,500 for this letter, containing the signatures of John Hancock, George Read, Robert Morris, Francis Lewis, Arthur Middleton, and the rarest of the rare, Button Gwinnett. The letter, found by a descendant of the recipient (John Ashmead), was sold at Anderson Galleries on 16 March 1927, for the then eye-popping sum of $51,000. The buyer was Dr. A.S.W. Rosenbach, the great Philadelphia bookman, who displayed the letter as part of several public exhibitions in the 1930s and 1940s (and included it in several of his catalogs).
Rosenbach finally sold the letter to Countess Carrie Estelle Doheny in 1948, and it sold at the sixth round of her sale, Christie's (1989) to the Copley Library for a bid of $209,000 (where it became the final Signer signature in the library's collection). That price for a Gwinnett signature was not beaten until 27 March 2002, when Christie's sold a different letter signed by Gwinnett, this one from the Forbes Collection. That made $270,000, a record which stood until yesterday's sale obliterated it.
Interestingly, there seemed to be some Southern Signer Spillover - along with the Gwinnett letter, several other letters did much better than expected. The North Carolina Signers did very well: a 1775 Joseph Hewes letter to Samuel Johnston better than tripled its esimates, selling for $53,125, then a February 1776 William Hooper letter more than doubled its projections and made $122,500. That was followed hot on its heels by a second Hooper letter from April 1776, which sold for $206,500 (over high estimates of $50,000).
The South Carolinians didn't do quite as well, but certainly exceeded expectations: a book from the library of South Carolina Signer Thomas Lynch fetched $40,625, and a document signed by his fellow Arthur Middleton and Thomas Heyward beat its estimate more than four times over, reaching $46,875. An Edward Rutledge letter made $23,750 (nearly double the estimate).
Gwinnett's fellow Georgians (Lyman Hall and George Walton) weren't represented in the sale.
If and when I learn who the buyer of the Gwinnett letter was, I'll be sure to report.
I've posted a full recap of yesterday's Copley Sale, if you want all the non-Gwinnett auction prices.