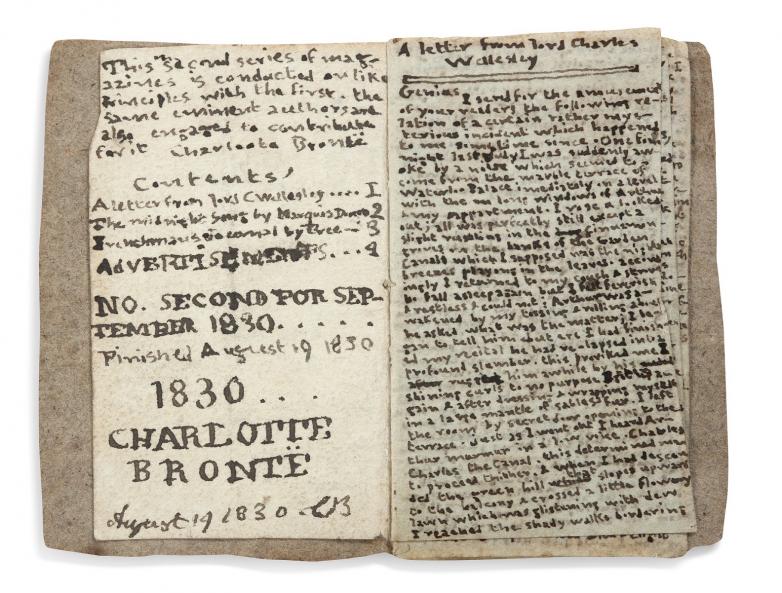 Next month the Brontë Parsonage Museum, the former home of the Brontë family, will get a second chance to secure one of Charlotte Brontë’s ‘little books.’ The tiny manuscript, written in 1830 when she was just fourteen years old, contains three handwritten stories that evoke the rich imaginary world she and her siblings created. It came to light in 2011, having been in private ownership since the death of the Brontës, and was subsequently sent to auction at Sotheby’s with an estimate of £200,000-300,000. The museum raised what it hoped were the necessary funds, but in the end it was diabolically outbid — to the tune of £690,850, or just over $1 million — by Aristophil, a now bankrupt company that defrauded collectors and dealers and whose collections are currently being sold off in a series of auctions in Paris.

“This extraordinary manuscript slipped through our fingers in 2011 so we are especially determined to make the most of this second opportunity to bring it home to Haworth,” said Kitty Wright, executive director of the Brontë Society, in a press statement. “It is expected to sell for at least £650,000 and we’ve been working hard for many months applying to trusts and foundations. This is the final and public phase of our campaign and we urge lovers of literature everywhere to support us now, so that we can go to the auction with a competitive bid and prevent the little book from disappearing into a private collection.”

To that end, the society has posted this informational video and is taking donations on its website.

This ‘little book’ is one of six in a series the Brontë children titled “The Young Men’s Magazine.” The Brontë Parsonage Museum already owns the first four booklets, and the item up for sale is the fifth in the sequence; the sixth is nonextant. The manuscripts were written, folded, and stitched into brown paper covers by Charlotte. The one headed to auction is particularly exceptional, according to the museum, because it describes a murderer driven to madness after being haunted by his victims and a fire that causes his bed curtains to ignite — a clear precursor of the famous scene in Jane Eyre, which Charlotte would publish seventeen years later.

Ann Dinsdale, principal curator at the Brontë Parsonage Museum, commented, “These little books are enormously important to both visitors and scholars. The four that we are fortunate enough to own are some of our most popular exhibits and to see this volume of 'The Young Men’s Magazine' reunited with the others in our collection would be wonderful. If we are successful, it would be one of the most important things to happen in the 30 years I’ve worked at the Parsonage; a real highlight.”

Even Dame Judi Dench, president of the Brontë Society, weighed in on the much desired acquisition, saying, “I have long been fascinated by the little books created by the Brontës when they were children. These tiny manuscripts are like a magical doorway into the imaginary worlds they inhabited and also hint at their ambition to become published authors. It’s very moving to think of 14 year-old Charlotte creating this particular little book at home in Haworth Parsonage and I hope that everyone will help the Brontë Society to bring it back to Yorkshire where it belongs.”

The auction is scheduled for November 18 at Drouot.