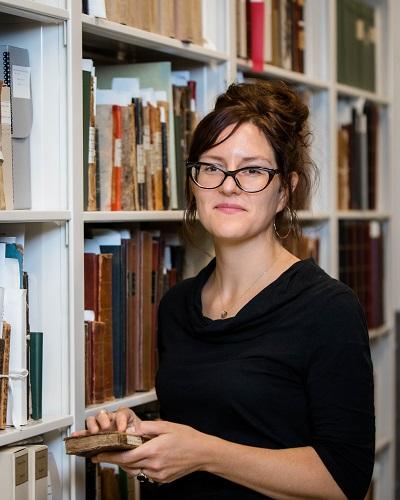 I am the Curator of Manuscripts at the American Antiquarian Society. AAS has a fantastic collection of American book trades manuscripts and New England diaries and account books, but they often get less attention than our printed collections. We often say that we want one copy of everything that was printed in what became the United States before 1877 (with some exceptions), but we also actively acquire manuscripts. So we purchase and accept through donation New England family and business papers, diaries, and United States book trades manuscripts, all generally within our pre-20th century time frame. I’m primarily responsible for seeking out and bringing those collections to AAS. Once those collections come through the doors, I process and catalog them with help from a few dedicated volunteers. I also work closely with the fellows, of whom we have about 50 each year, researchers, and class visits and present on the manuscript collections at conferences and other venues. Additionally, I serve as the institutional archivist, which means I do lots of filing and, more recently, deal with digital archives and email. And because curators wear many hats, I also handle rights and reproductions requests for the Society.

As I was completing a Master’s in English from Clark University in Worcester, I visited the AAS often for class and research visits. Like a lot of visitors, I fell in love with everything about AAS--the people, the collections, the space, the scholarly community. So I had my sights on a job at AAS from the very beginning of my academic career and decided to pursue a PhD in American history at Clark to remain close to AAS. At the time I planned to write a dissertation on eighteenth-century printing history and worked closely with the Printer’s File, a catalog of biographical data on printers, publishers, bookbinders, and booksellers operating before 1820. By some stroke of luck, I was offered a job working with the newspaper collection at AAS after a couple of years into the PhD program. During my second year working at AAS, Michael Winship, who was in residence as an NEH long-term fellow, turned me onto bibliography and the materiality of the book. Over the years I’ve worked in almost every library department except conservation, so I’ve cataloged books, worked in digital expediting with some of our vendors, and spent time in both the reference and graphic arts departments. Now I’ve landed in the manuscripts department, where I’ve been for the past 5 years.

I’ve always been partial to bindings, and I’ve written about late eighteenth-century American bookbindings for Cathy Baker and Julia Miller’s Suave Mechanicals series. Many years ago, I spent my summer weekends working with a binder near Cambridge, so I have some hands-on experience doing leather binding. My favorite books are probably the several copies of Charlotte Smith’s 1795 Sonnets in the AAS collections that were published by AAS founder and printer/publisher/bookseller Isaiah Thomas. When you look at the copies together, you can see the range of bindings in which Thomas offered and sold the title. Early American trade bindings are a neglected area of study, but when you have access to collections like AAS’s, you really start to understand the nature of eighteenth- and early nineteenth-century American trade bindings. We also have the business records and correspondence of Isaiah Thomas at AAS, so we can study the manuscripts that discuss his printing or binding of a book and then go right to the shelves to look at his personal copies in their original bindings. Sometimes I feel like I’m in Thomas’s own warehouse or bookshop.

At AAS we are prohibited from collecting in our library’s area of specialty, which prevents staff from collecting American books and other printed materials produced before 1900. I’ve always been a reader and have a rather large collection of books, but I became interested in collecting rare books when I picked up a copy of Daniel Carson Goodman’s 1913 book Hagar Revelly. Mitchell Kennerley, his publisher, was arrested by Comstock for this supposedly obscene novel. Goodman was also involved in early film production, and that whole period of 1910s film history is really interesting to me, so I collected Goodman titles and association copies for a while. After a period of time, I became more interested in Kennerley and the Kennerley typeface by Goudy, so I started collecting some Kennerly titles and examples of Goudy’s printing. The Kennerley typeface was used in the first edition of Edna St. Vincent Millay’s Renascence in 1917, and for some years I’ve been focusing solely on Millay, mostly editions of Renascence, and works from writers in her New York circle. My copy of the first edition, laid-paper issue of Renascence was owned by the African-American singer Muriel Rahn. I love the titular poem of Renascence, there’s an interesting history to the Harper reprints of the Kennerley editions, and there are bibliographies by Daniel Boice on Kennerly and Tom Tanselle and Karl Yost on Millay. It’s always fun to work with a good (or bad) bibliography.

Since I was a teenager I’ve played the guitar. I’m not a technically great (or even particularly good) player, but I have fun trying to learn something new about music every time I sit down to play. Now that there are so many YouTube tutorials on learning almost every song under the sun, I’ve become less interested in learning or perfecting songs. For me it ‘s about figuring out something new about the way notes interact with each other. On any given weekend you can find me sitting around for hours, listening to a song, and trying to figure out how it was made. I have a nice collection of tube amps and instruments that belonged to my father, who was a mainframe engineer. He was always building new electronic equipment to produce new sounds. I never learned anything about engineering from him, but when I sit down to play I feel like he’s there with me. I think there are lots of ways we can bring the dead to life, and playing music and working with old books and manuscripts is one way I do that. And, honestly, it’s just nice to escape from words every once in a while. I’ll also add that I really like just wasting time with my family and friends.

Most definitely the community. Watching a group of researchers or fellows gather around a table to look at an item, knowing that one of them will write that collection and that moment of intellectual discovery into history, is very exciting. I particularly love working with vernacular manuscripts because they tell the story of everyday life. Collecting histories of everyday life is something AAS has been committed to for years, and nothing can compare to watching those stories come to life in the reading room in vibrant discussions

For years we’ve been trying to figure out how to make our collections more available, visible, and accessible in the virtual realm, but the pandemic has forced us to make more progress in a few months than we might otherwise have made in a few years. I hope we continue to utilize these tools after the pandemic. We’ve also made some baby steps in making the special collections world more inclusive, but it’s still hard for a working class kid to make his or her way into special collections. I’d like to see that change. What’s gotten the American Antiquarian Society through 200 years of war, pandemics, economic depression, and unrest is the commitment to tell stories by protecting and sharing America’s history. As long as special collections librarians focus on telling the most inclusive stories from their collections in the most inclusive way possible, then I think we will survive.

How do you pick out one collection in a library full of unusual or interesting material? AAS has a collection of racy newspapers, the composing stick that Isaiah Thomas used to set type, a copy of the 1663 Eliot Indian Bible, the only known copy of Benjamin Franklin’s 1740 edition of Pamela (and countless other only known copies, for that matter), a copy of the first anthology of African-American poetry from 1845, and even coffee beans from the desk of Ulysses S. Grant. But at the present moment I’d like to point out the James Fenimore Cooper Collection. AAS has long collected editions of Cooper to aid with the MLA scholarly edition of the Writings of James Fenimore Cooper, and it’s one area in which we buy far outside of our geographic and chronological scope. We have German, Russian, and Italian editions from well into the twentieth century, some of Cooper’s manuscripts, the papers of James Franklin Beard (who edited the Cooper Edition before his death), and even a collection of Cooper comic books. Along with the editors of the Cooper Edition, I am helping to plan a two-day conference at AAS next year before the American Literature Association conference in Boston. We’re planning to focus the mini-conference on radical textual editing and ideas about who gets to make a book. This conference will hopefully help us to rethink and remix authorial authority when it comes to book production, in particular the scholarly edition.

AAS recently organized a traveling exhibition called Beyond Midnight: Paul Revere. Before the pandemic, the exhibition was shown at the New York Historical Society and returned to Massachusetts to be jointly presented at the Worcester Art Museum and Concord Museum. Unfortunately the pandemic cut short the exhibition’s run in Massachusetts and made its summer journey to Crystal Bridges impossible. But we’ve produced an online exhibition based on Beyond Midnight, and we’re always producing other online exhibitions and online content. And while AAS does not have an exhibition space in the building, visitors are welcome to come to Worcester for a behind the scenes tour of the stacks when we resume public tours.