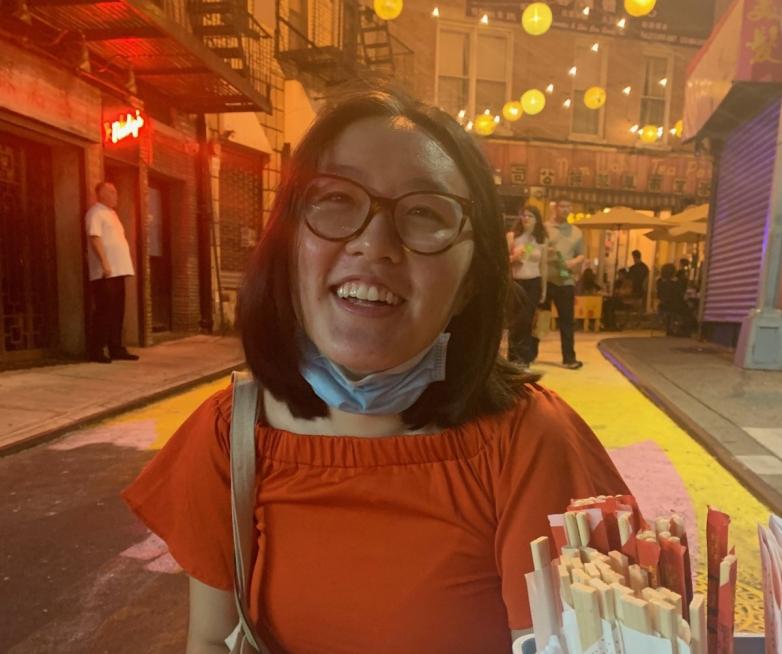 I grew up between the United States and China, lived in New York for 6 years during and following my studies at the university level, and now reside in the north of France.

At University, I studied English Literature and Comparative Literature (Chinese, French, Spanish). Since graduating, I’ve been reading towards my MA in Chinese Studies on a scholarship from the Chinese government, but this year I’m working as a lecturer in English in France.

As I wrote in my essay for the Honey & Wax prize, based in Brooklyn this year, I collect Chinese and English books that speak to the crossover of East and West, and offer differing representations and interpretations of China and Chinese aesthetics. Up to this moment, this has included Chinese-English publications designed for a readership of overseas Chinese, studies of Chinese classics conducted by Western scholars, and modern Chinese novels by émigrés translated for English-reading audiences. Up to this point, my collection focused on the Chinese community in New York. Beyond digging deeper into the Chinese diaspora in the United States — San Francisco, for example, I am also expanding my focus to include Chinese-French and Chinese-Spanish translations and publications, as the Chinese diaspora is worldwide and visions of “China” and the Chinese book different depending on the location, language, culture in which they are transmitted.

The parameters of the collection itself are always in flux, so it’s hard to say for sure, but I would estimate about 25 right now.

The first book in my collection I came upon by chance in a professor’s book bin, but Justin Wu Ho Ming (Hong Kong)’s anthology in English and traditional Chinese, One Hundred Chinese Stories Retold [Chung Kuo Ku Shih Yi Pai Pien]: with Grammatical Notes and Equivalent Chinese (1961). The pages are falling apart, but the stories are impressionable and often almost absurd; while reinforcing of material values and moralistic, it has quite surprisingly “un-Chinese” sensibilities and is really entertaining to read.

At a bouquiniste in the Quartier Latin in Paris, I came across a French translation of Qing Dynasty romancier Pu Songling (1640-1715)’s “Strange Stories from a Chinese Studio,” “Contes fantastiques du Pavilion des Loisirs,” issued by the the Foreign Languages Press (Editions En Langues Étrangères) in Beijing, 1986. The text was in excellent condition and I picked it up instantly, as I hope to expand my collection of Chinese and translated Chinese literature in French and Spanish.

I also located a French copy of contemporary Taiwanese poet Hung Hung's Le passe-muraille, published with Les Éditions Circe, that I'm excited about. But this is more so on a reading and less material level.

I am fond of Anne Birrell’s New Songs from a Jade Terrace: an Anthology of Early Chinese Love Poetry London: Allen & Unwin (1982). It is a collection of early medieval Chinese poetry in the romantic or semi-erotic “palace style,” dating to the late Southern dynasties period (420-589), and introduced in English by Birrell, a scholar at Cambridge. In these poems, women (or men speaking as women) often speak of or mourn love, separation and the passage of time, the ephemerality of life, beauty, and sexuality/sensuality evoked with the passage of the seasons. The imbrication of romantic sentiments and naturalist/Taoist interconnection with nature is rare and quite specific to this genre of Chinese poetry; I think of, say, English romantic poetry as a point of comparison, but these poems are much more ancient and belong to a different aesthetic tradition. Form and content are intertwined in this case: my physical copy of the book, which has a striking red cover, and the wearing of the pages attests to the decay of the material through time… but the writing is sacred, the transmission of these poets’ voices remains possible.

A first edition of Mao Tun’s Midnight (1957), published by the Foreign Languages Press in Beijing, I found in a bargain bin at a used bookstore in New York. It has illustrations and a charming bookmark from a Chinese airline company tucked inside.

The one that got away and could never have been found in the first place: my parents’ annotated copy of New Concept English (1967), the popular English language textbook teaching British rules of English in the 1960s. As my parents often recount to me in their reminisces of the time shortly before taking the leap to the United States, this was the guide to (British) English for language learners in Shanghai in the 1980s.

It would be to find the edition of New Concept English that my parents used to learn English in the late 80s. There is also a book that my father talks of, a collection of Bei Dao 北岛’s poetry in the 1980s, which he would read after work in Shanghai and the imbrication of his memories of reading and of his own life at that time entice me. Bei Dao was a translator for the Foreign Languages Press in the early 1980s and, while I haven’t figured out how to find it, I would love to locate copies of the works that he translated along with publications in the literary review Jintian《今天》in Beijing and in Stockholm where the poet took exile in 1990.

This is so hard to answer — I have go-tos for each specific book need! In New York, I love having a promenade on the Upper West Side and visiting the bookstands on Broadway. Here in France, the culture of bouquinistes is also very much alive (along the Quai de Montebello in Paris, for example, and the Place Kléber in Strasbourg where there is a book market every Saturday). These places have enchanted me and I love to visit and bavarder with these booksellers who really care about the book trade and traditional media.

I am someone who has all sorts of collections outside of books — images, memories. I’m not at a point in life where I am moved by ceramics yet, but I am an enthusiast of contemporary painting and if I had the resources I would collect modern and contemporary abstract painting (thinking Tachisme and after in Europe and Japan, Abstract Expressionism and after in the United States, post-1940s abstraction in China). I am equally a fan of naive/amateur art and I think in another life I would work in painting restoration: paintings/drawings made for amusement or from spontaneity, given to friends for their anniversaries, hung on the walls of cafés and restaurants, unknown to the art market.