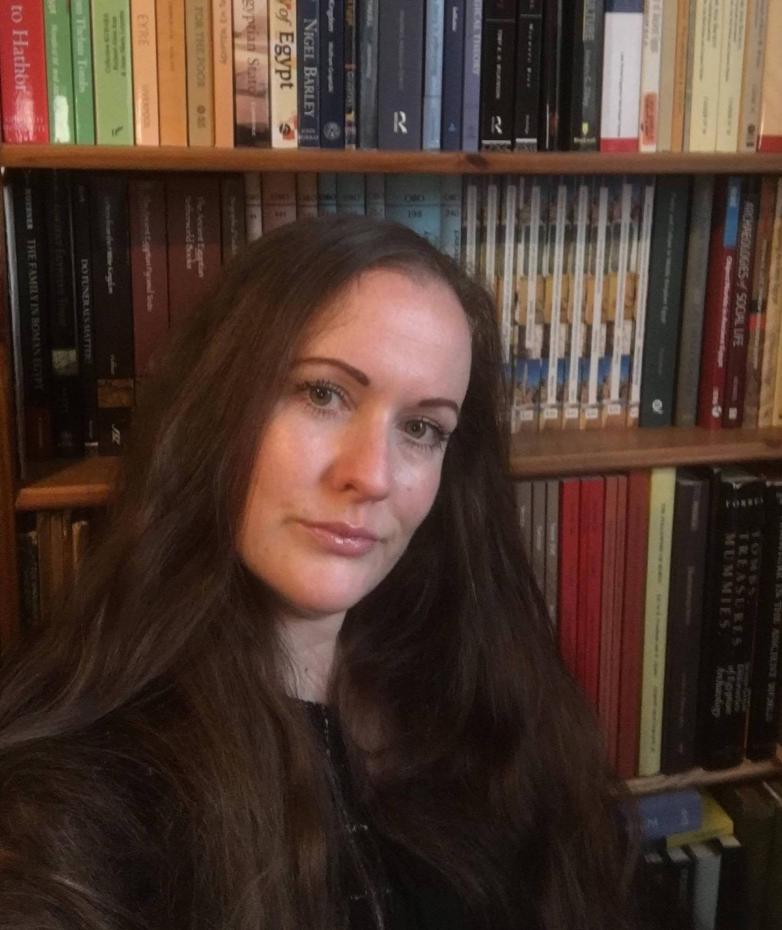 I currently live in Oxford, United Kingdom. However, I’m originally from a small town in the South of Luxembourg—which makes me one of the country’s only 600,000 inhabitants.

As an Egyptologist, I basically collect every book that has somehow to do with Egypt: specialist literature, picture books, historic and fantasy novels, etc. I don’t only like to read about Egypt for my work, but also for mere pleasure. I’m for instance very fond of the Amelia Peabody Murder Mysteries, written by the American Egyptologist Barbara Mertz under her nom de plume of Elizabeth Peters. Unfortunately, this beloved author of mine died in 2013, so that there will be no more new adventures of the Emerson-Peabody family.

Within my collection of Egyptological books, autobiographies and biographies of early travellers and Egyptologists—especially of women like Amelia Edwards (actually one of the inspirations for Amelia Peabody)—take up a particular space in my shelves and of course in my heart. For me, it was always important to remember and understand these early figures of my field and thus value their contribution. It was their dreams, motivation, energy as well as sacrifices and hardships that made the study of Egyptology actually possible. They paved the way for students like me. Furthermore, as I’ve been several times to Egypt myself, I like to read about their travels and compare them to my own. It is amazing to see what has changed and what hasn’t changed in the past centuries. Thus, these books also give me the opportunity to learn about the more recent history of Egypt seen through the eyes of many different people with different backgrounds and thus understandings.

As Mason Cooley said: "Reading gives us someplace to go when we have to stay where we are." Thus, my collection of these (auto-)biographies gives me the opportunity to travel to Egypt—or rather many different Egypts at different times—when I have to stay at home.

To be honest, it’s hard for me to keep track of the exact number, as my collection is divided between my flat here in Oxford and my parents’ house in Luxembourg. Some time ago, I started registering my books on LibraryThing in order to get a better overview. So far, I’ve recorded over 1,000 books on their website. However, this number includes all of my Egyptological and Egypt-themed books. My collection of (auto-)biographies is significantly smaller, probably only around 75 items.

I was only 7 or 8 years old, when I knew that I wanted to become an Egyptologist, and I actually started collecting books before I was really able to buy my own. So, my first books on Egypt were given to me by family members as presents for Christmases, birthdays, and other special occasions.

I actually don’t remember which book about Egypt I first bought myself. However, Crocodile on the Sandbank by Elizabeth Peters, the first volume of the Amelia Peabody Murder Mysteries, must have been one of them. In this series, the heroine Amelia Peabody and her husband Emerson, eminent Professor of Egyptology, meet and interact with many of the important Egyptologists of their time, e.g. Howard Carter, the discoverer of Tutankhamun’s tomb. As Elizabeth Peters, actually Barbara Mertz, was an Egyptologist herself, she was aware of the many anecdotes about certain scholars that circulate in the field and must have read at least some of their journals and (auto-)biographies. Her novels definitely sparked my interest in the history of Egyptology.

The most recent book I bought is the fifth edition of Who Was Who in Egyptology, edited by Morris L. Bierbrier. It includes small biographies, often accompanied by pictures, of Egyptologists that contributed to the field. The existing biographies are constantly updated and new ones are added. The Who Was Who is a great starting point to get a quick overview of the lives of specific Egyptologists. And, of course, a great pastime.

Asking a collector about his or her favourite book in the collection feels like asking a parent about his or her preferred child. I actually like all my books and would not want to part with any of them. Of course, there are some books that might be rarer than others. I particularly like old books with dedications that are part of the object’s history and prove that they have been loved and cared for in the past. After winning the Colin Franklin Book Collecting Prize in 2019, I bought an 1877 copy of Amelia Edward’s A Thousand Miles up the Nile. The book was originally given by a husband to his wife for their 29th wedding anniversary and in remembrance of their visit to Egypt in 1867. It is these little details that make books for me even more special.

In a way, every affordable copy of a sought-after book is a bargain for me. As many of the Egyptological books are only published in small numbers, already new ones tend to be quite expensive. Thus, the prices for older and rarer publications go up even more over time—and thus out of reach for a student.

As I’m far from done with collecting books, I don’t like to think of books that got away, just of publications that I don’t own yet. After all, if it would be easy to find and acquire all the books I wanted, it would take away some of the excitement, of the feeling of achievement when finally stumbling upon a long sought-after copy.

There are of course many books by early travellers and Egyptologists that are particularly rare and thus unaffordable for ‘normal’ people like me, except maybe if I would sell my soul to the devil. However, to be honest, I would actually not want to find the Holy Grail for my collection, as its discovery would mean an end to my quest. And, at least for me, the joys of collecting are as much about the mission, the treasure hunt than they are about the discovery and purchase as such.

I do not really have a favourite bookseller or bookstore. I do not discriminate, I love all of them. As my collection interest is quite particular—and some Egyptological books are rather rare—it can sometimes take me years to track down an affordable copy. I actually keep a list with rare book titles which I regularly check against the inventory of online catalogues and databases. There are of course specialist bookstores like Meretseger Books and Librairie Cybele, which mainly offer Egyptological publications, and they are often the starting point for my searches. However, it can also happen that I come across a desired book in a very unlikely place. Thus, I bought many books from a market stall here in Oxford, whose owner had purchased part of the collection of a deceased Egyptology professor. I always like to compare the search process to a treasure hunt—although I might just have watched too many Indiana Jones movies.

I actually cannot imagine my life without collecting books, as it is such an important part of me. However, as an Egyptologist and Egyptomaniac, I actually collect other items that are related to Egypt as well like jewellery, movies, figurines, posters, and other types of decoration. Hence, for instance, I’m the proud owner of a sarcophagus-shaped wine rack. So, if I would—or rather could—not collect books, I would probably just amass all the rest. I guess that collecting really lies in my nature.