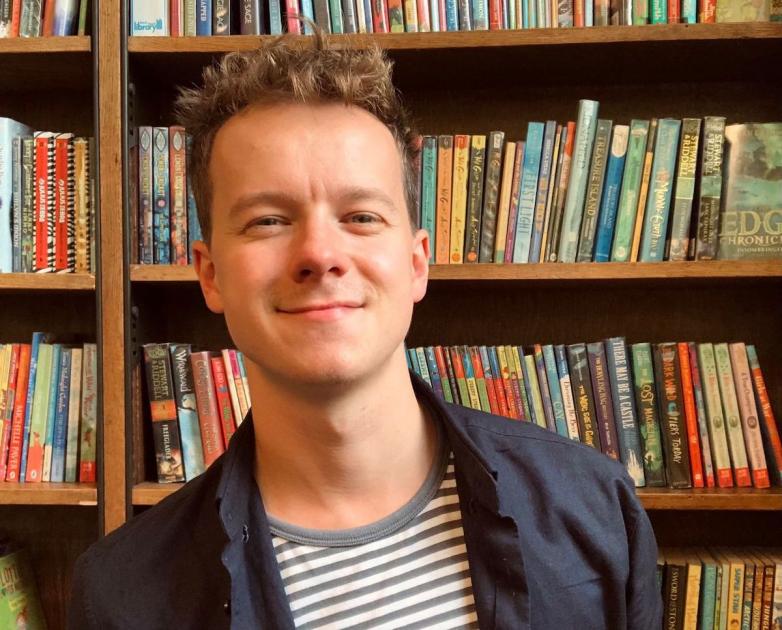 In Cambridge in the East of England. I moved here in 2014, sort of by mistake, and joined the University a few years later. I started my PhD in 2019.

Children’s literature published in English addressing the AIDS crisis, primarily but not exclusively in a United States context. I’ve always collected children’s books, insofar as I’ve always read children’s books. But the search became formal in my PhD, as I started to buy and read mostly old and mostly American books for young people about HIV/AIDS. Once I had enough of them to fill a small bookcase, I began to think, ‘Hey, there can’t be many other people in the world who also own all these novels and picturebooks about this incredibly important and taboo subject.’ This realisation galvanized me to take it seriously as a collection and expand it beyond my initial focus of just LGBTQ+ contexts, although those remain the lion’s share.

At my last count, it was fifty-four, but I’ve bought a bunch more since then. I’m grateful for the research allowance I get through my scholarship, a privilege which made buying these books easier. A few years ago when I had no money I would feel resentful towards someone talking casually about buying so many books.

Night Kites by M.E. Kerr, which was published in 1986, although the first copy I purchased was a later edition. Night Kites is the first young adult novel to represent the AIDS crisis; it’s about a teenage boy whose world changes when he finds out his older brother is gay and living with AIDS in a time in which there was no treatment. The novel’s representation of small town homophobia and AIDS panic is moving and well-handled. I’ve since bought two other editions: the first UK edition, which was published as part of the Pan Horizons imprint, and the original US edition, which is a beautiful hardback copy.

Jim and Brett Bouldon’s Uncle Jerry has AIDS, which is a picturebook from the early 1990s intended to support children whose family members have AIDS. It includes some colouring-in pages, which fascinates me. I also try to keep an eye on contemporary children’s literature about HIV/AIDS today because it’s such a different medical context, and it’s important for me to be mindful of that. Melissa’s Story by Andy Glynne is part of the recent Living with Illness series and provides a calm, contemporary depiction of a Black British schoolgirl managing HIV as a chronic illness.

Difficult question! As a reader, I love Earthshine by Theresa Nelson, which made me cry, or Camryn Garrett’s Full Disclosure, which is a contemporary novel about a HIV+ Black teenage girl in America living healthily with an undetectable status. It’s triumphant, beautiful, and important. But as a collector, I’m fond of my first edition of Morris Gleitzman’s Two Weeks with the Queen, published by Blackie in 1989. The novel is unusual as one of the only representations of HIV/AIDS in the United Kingdom in children’s literature. In the novel, a child befriends a pair of HIV+ gay men living with AIDS as his brother undergoes treatment for leukemia; the solidarity in their friendship is empowering. Gleitzman is one of the most famous Australian children’s writers, so this book is still in print, which isn’t the case for many of the other early novels in my collection.

Most of the books in my collection aren’t particularly expensive because they aren’t coveted or traditionally collectible. That said, I’d argue that late-twentieth century young adult novels are gorgeous, kitsch objects that speak to a specific and underrated moment in book history.

No title springs to mind, but a handful of older and less popular books have been hard to get simply because the most obvious sellers aren’t selling them. As mass-market paperbacks without hardback editions or reprints, many are akin to ephemera. I also made a decision not to collect children’s literature about HIV/AIDS not written in English, simply for the need to draw a line somewhere.

I’d be over the moon to get a copy of Susanne Bösche’s Jenny Lives with Eric and Martin, first published as Mette bor hos Morten og Erik. It’s a photographic picturebook introducing the concept of same-gender parents to children. It’s infamous because hysteria about its morality brought about Section 28, a vile British law which essentially banned the so-called “promotion of homosexuality” in British schools. Unsurprisingly, this law only exacerbated silence around LGBTQ+ issues and HIV/AIDS prevention in education. Joshua Simpson at the University of Strathclyde has done really important research on this. The law wasn’t repealed until the mid-2000s, years into Tony Blair’s premiership. Today it resonates in new laws censoring LGBTQ+ children’s literature in Hungary.

Camp Books is amazing. It’s a great book, zine and print shop run by Brooke Palmieri, an artist and scholar who runs courses on queer book history for the London Rare Books School.