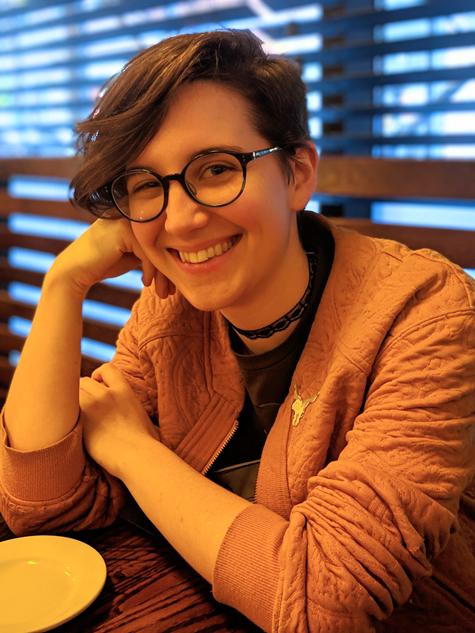 I was born in Hawaii, on the island of Oahu. Today I live in Queens, New York.

I graduated from the School of Visual Arts in New York with a BFA in Cartooning. I chose to go to SVA because it’s one of only a handful of undergraduate programs where you can focus on comics storytelling. Today, I work at a digital comic book publisher/distributor, and continue to make independent comics on my own time.

I collect fan-made comics and dōjinshi. Those totally unfamiliar with the idea might best understand these books if I described them as “fan fiction” in comic form. I’m passionate about fan comics regardless of their origin, but most of the books in my collection are Japanese dōjinshi. The practice of producing fan comics is so well-established in Japan that it occupies a unique semi-professional, semi-legal space that really has no equivalent elsewhere, so naturally that is a lot to dive into. Some fanzines in my collection are books of illustrations, or comics mixed with prose, but my focus is definitely on comics.

Today I have almost 500 books. Thankfully most dōjinshi and fanzines are thin and lightweight, or I wouldn’t be able to fit them in my apartment so easily.

The books that started my collection are a novel-length, two-part fancomic series about a character from Nickelodeon’s Avatar: the Last Airbender, by artist Johanne Matte. I bought them from the artist at New York Comic Con in 2010. Matte actually worked on the show in an official capacity as well, and discovering her work made a big impression on me. It was inspiring to realize that being a "professional" did not necessarily exclude you from using your skill for "unprofessional" passion projects.

The most recent books are a handful of fanzines I picked up at “Flamecon,” a LGBTQ focused comic con in New York City. Two of them are palm-sized minicomics based on the recent TV adaptation of “Good Omens” - another is a collection of “High School Musical” stories with a queer focus.

It’s really hard to pick a favorite! Blinded by the Ice by "saicoink" is one of my favorites in terms of the actual story. It’s an “alternate universe” fancomic for the anime Yuri on Ice. It’s not simply a love letter to the show - it contains so much of the artist’s personal vision and sensibilities that I think it showcases how transformative works or “fanfiction” can be great pieces of art in their own right. There are other books in my collection that stand out to me for their beautiful book design, or because of how difficult they were to find, but that’s the book I would point to that represents the heart of why I collect and celebrate fancomics.

Best bargain you’ve found? / How about The One that Got Away?

The best bargain I found and “the one that got away” are one and the same! There was a dōjinshi I had picked up just because the art was nice and I liked the cover design, and it happened to be a two-parter. Of course, having part 1, any collector is going to have the itch to find part 2. I was browsing a secondhand shop in Tokyo when I saw the woman next to me pull the sequel off the shelf and seemingly debate over whether or not to buy it for long, agonizing minutes - even going so far as to put it back on the shelf, change her mind, and take it off again. I watched her out of the corner of my eye sweating in suspense! In the end, she did buy it and I resigned myself to the fact I might never see it pop up again. A year or so later I took another trip to Japan, and found the book in the ¥100 section (so around $1)of a different shop. Sometimes all it takes is patience.

I’m really fascinated with Star Trek zines from their heyday in the ‘70s. Not only am I a Star Trek fan myself, but those fanzines really represent the history of “fandom” as we know it taking shape in the West, and I’d love to acknowledge that more within my collection. It would be incredible to find an art-focused zine. That would be considerably more rare than anything else in my collection today, but I’ll dream big.

One of the special things about the nature of fan-made comics is that often, you’re seeking them out from the artist directly, or discovering them by getting involved in communities online. Picking up a comic from the artist at a convention means you get to show your appreciation for their work in person, and maybe even share a moment of enthusiasm over whatever it is you’re both obsessed with at the moment.

I would probably collect miniatures -- I love tiny things!