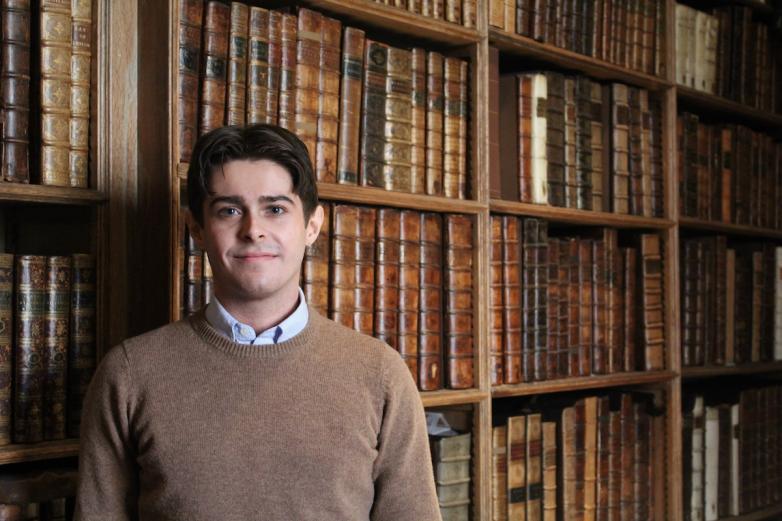 Our Bright Young Collectors series continues today with Daniel Haynes, winner of the 2021 Anthony Davis Book Collecting Prize, which is open to all students at London-based universities.

I recently moved to Windsor to start a new job, having lived in Oxford since 2013.

I collect books printed by the Roycroft Press, the Arts and Crafts community founded in East Aurora, NY in 1896. Specifically, I look for books containing watercolor hand-illuminations by women artists—a feature of a more experimental period in the history of the Press, from 1896 to around the turn of the century. These illuminations vary from painted initials and ornaments to large, freehand illustrations, and many are signed by their illuminator. As my collection grew, the scope widened to include rubrication— hand-drawn initials and paragraph markers, self-consciously reminiscent of early printed books and requiring a similar degree of effort to complete. One example in my collection contains over 800 marks. I think the illuminator was justified in signing her name to that job.

Although the Roycroft Press has a somewhat mixed reputation, these books are beautiful creations, and they point more broadly towards Roycroft women whose importance has been overlooked. The artistic talents of Bertha Crawford Hubbard (1861-1946) influenced the visual direction of the Press, notably the illumination. The more literary-minded Alice Hubbard (1861-1915) wrote extensively on suffrage and a woman’s right to ‘the money earned by herself’. Alice’s works were printed by the Roycrofters, and I collect these, too.

So, my collection is really a bunch of interrelated threads: women’s involvement in book production, illustrated editions, suffragette ideals in theory in practice. It’s a mirror of a strange but fascinating private press, about which there’s much more research waiting to be done.

I have around forty hand-illumined books. Most have limited or partial illumination (usually to title-page, initials, and  ornaments) and they aren’t considered particularly valuable on the market, but they’re still signed, which I feel makes them special. A few even have those freehand watercolors; three are rubricated. My favorite watercolor depicts a monk on a bike reading a book, which is as strange as it sounds.

The Roycrofters offered a range of bindings for the same publication, from drab paper boards to nice ¾ leather covers hand-tooled by the same women who worked in the illumination studio. These are harder to find but I’m fortunate to have five examples, all illuminated.

This whole thing began entirely entirely by accident when I bought some seemingly nondescript books for their interesting provenance. The bookseller’s listing for ‘Victorian biographies’ turned out to be an understatement, and here we are…

It’s called Lest I Forget, and though not strictly Roycroft, it’s nonetheless fascinating. It’s a notebook for keeping track of loaned books, interspersed with bookish epigrams and poems, with an illustrated title-page depicting a woman writing at a book-strewn table. I bought it for the inscription dated Feb 1908 to Alice Hubbard by its author, Clara G. Keck. This is probably Clara Keck (later Heflebower), author of another book of epigrams titled Winged Arrows (1928), and later president of the National League of Pen Women. To the best of my knowledge, Lest I Forget is totally unknown, yet it represents an important aspect slice of book history—that is, books written by and for literary women­. 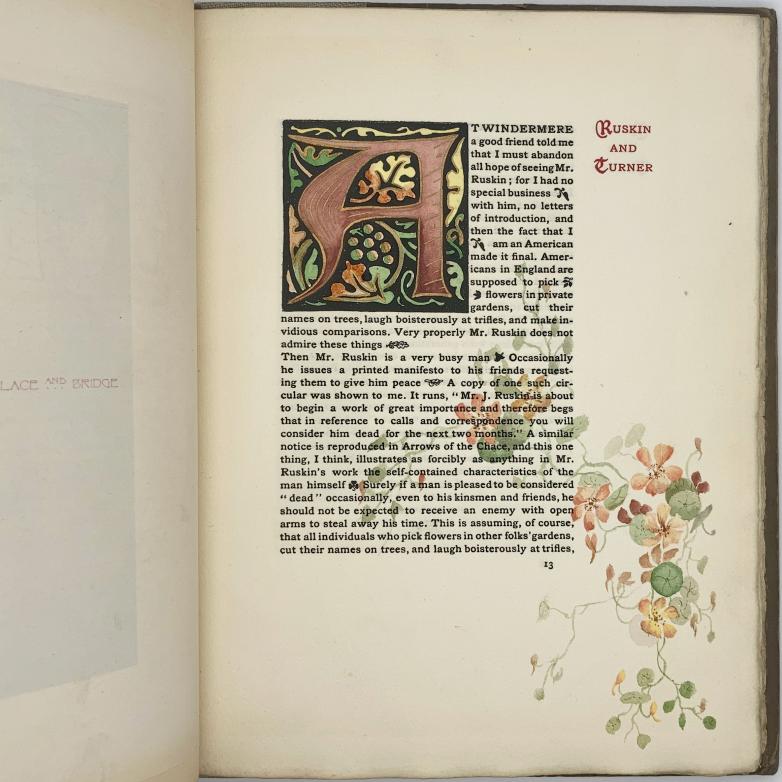 Ruskin & Turner (1896), the sixth book issued by the Press. For this book, the Roycrofters obtained ten photonegatives of Turner masterpieces from the British Museum. But the beautiful watercolor seals the deal for me—flowing into and over the text, throwing it into a kind of relief and drawing attention to the physicality of its printing. Unfortunately, on this occasion the artist didn’t sign her work! Given the publication date, a likely candidate is Bertha Crawford Hubbard, Elbert’s first wife, who oversaw the illumination studio at this time.

Some two dozen Roycroft books, sold as a single lot, for an astonishingly low hammer price. I suppose there wasn’t any interest because many of these books are quite common—but for someone starting out it was brilliant, especially because so many were illuminated.

On a student budget there are too many to count!

Twelve copies of the first Roycroft Press book, The Song of Songs (1896), were printed on vellum and illuminated by Bertha Hubbard (who also designed its woodblock title-page). It’d be wonderful to see those very first illuminations.

That would be Wonderful Books of Oz. Cindy Ragni specializes in Wizard of Oz books and ephemera but also has a great collection of Roycrofteana. One of my favorite books (the one with the monk!) came from Cindy, and she’s also helped me to build connections at the Roycroft Campus, which still exists today.