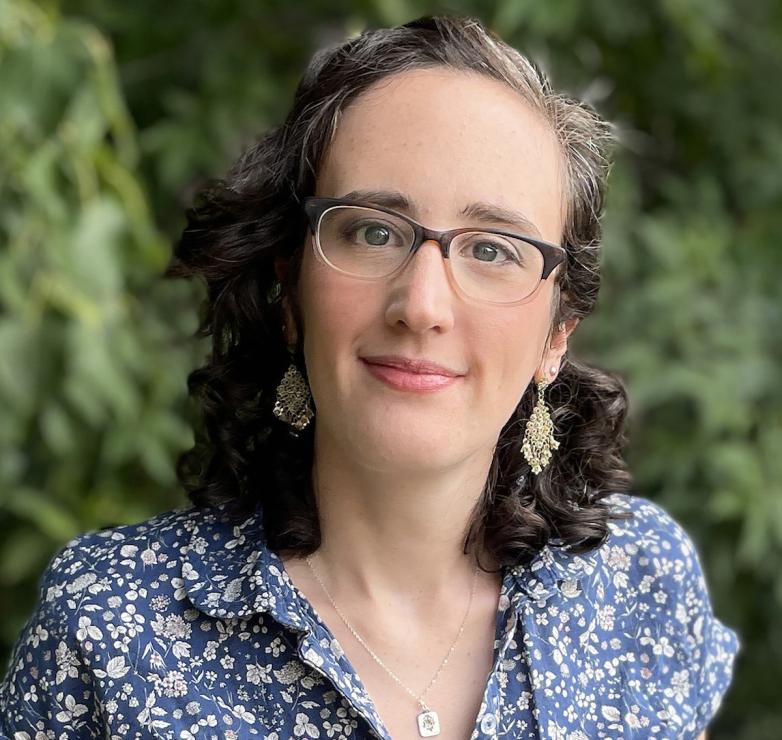 Our Bright Young Collectors series continues today with Caitlin Moriarty of Ann Arbor, Michigan, who was an Honorable Mention in the 2021 Honey & Wax Book Collecting Prize for women collectors aged 30 and younger.

I grew up in Minnesota in the Twin Cities, went to college in central Pennsylvania, and currently live in Ann Arbor, Michigan.

As an undergraduate at Dickinson College I studied Russian and political science, to which I credit the beginning of my collecting interests. I also worked in the college archives, and in hindsight this was sort of a third major. I went on to get a masters degree in archives and records management at the University of Michigan. I am currently an archivist at the Bentley Historical Library, which is the archives for the University of Michigan. I primarily work in reference and outreach related to university records and the history of the University.

I like to say that I collect out of date travel guides to countries that don’t exist anymore. By that I mean I collect travel guides to the Soviet Union and other Eastern European communist countries from before the fall, particularly those that were published in English for a foreign audience. Many of these were published by state publishing houses starting in the mid-1950s, as the USSR underwent a “Thaw” under Krushchev following the death of Stalin. Many of the guides are for Russia, especially Moscow and Leningrad, but I have books from further regions and several other Soviet States, including Siberia, Ukraine, and Georgia, as well as a few other countries in the Eastern Bloc. I am interested in how these guides present the place described inside to the outside world from a very intentional, officially designed perspective, especially in the context of the political situations of when they were published. It is also interesting to imagine what it would be like to travel to these places at the moment in time that is captured in the guide. 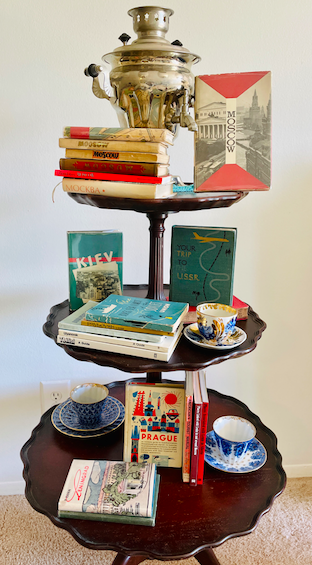 I have 26 that are strictly guidebooks. These tend to fall into two categories, practical guides that you could use to plan your day if you were in that place, or more descriptive ones that include longer historical and cultural information and would help you decide where to go in the first place. I also have a few travelogues, which I consider related but slightly out of scope, and a few other publications in English from state publishers.

The first book I bought for my collection was a copy of American’s Tourist Manual to the U.S.S.R. from the mid-seventies that I found at John King Books in Detroit. It was formerly part of the library of the Detroit News and still has the card pocket stapled in, as well as a map. The publisher is American, but includes content that seems to have been supplied directly by Intourist, the Soviet foreign travel agency. The book was only checked out once before it was likely replaced with a more current edition not long after, but this provenance makes me wonder how the information in guidebooks was adapted and synthesized into news articles about the Soviet Union.

Just the other week I won an online auction that someone tipped me off to for a 1929 Intourist tour catalog. I have not bought much in auctions, which are thrilling, and the book fills a large hole in my collection as I had not had much luck finding things from before the 1950s. It is a staple bound pamphlet with photographs and itineraries in English describing the travel tours offered in 1929 and 1930 by the state foreign travel bureau in the first year that it existed. This coincides with the beginning of Stalin’s rule and the rapid industrialization and modernization of the U.S.S.R., as well as greater international cooperation with the Soviet Union in the period leading up to WWII. It will be so interesting to see the early narrative that the Soviet Union wanted foreign visitors to hear and see. I am trying to wait patiently for its arrival from Europe.

One of the things I am especially drawn to is the graphic design of many of the books, especially those from the mid-twentieth century. This is especially in comparison to many modern travel guides from big publishers that all follow a uniform design template. The 1962 Tourist Manual to the U.S.S.R from the Foreign Languages Publishing House has a blue cloth publishers binding stamped in a few different colors with sort of wood block style and hand drawn illustrations that are printed throughout the pages that I really love. The 1968 guide to Prague is full of cheerful, vibrantly colored screen printed illustrations of the city in the style of Czech avant garde. This seems especially notable to me because it was the year that the Soviets invaded Czechoslovakia to suppress liberalization and reform that had been enacted during the Prague Spring. Even though these were state publishers, they were not just basic government reports, the people making them were able to make creative choices.

Most of the books in my collection have been a bargain, with only a few that have been more than $20 or $30. This may be partly due to the fact that I am interested in evidence of previous ownership and gravitate towards books that are in fair rather than fine condition due to signs of use. Also, most of the books in my collection are not really that rare. You could probably go online and find many of them right now. The first book that I acquired, before I even had a collection, was a guide to Moscow in Russian from the free shelf in the language building at my college. Others I have found at bookstores where they have clearly been sitting on the shelf for years if not decades. I have also received a couple as gifts from a few very kind people, including one that had used the guidebooks on their own visit to the U.S.S.R. as a student.

There haven't been any books that have necessarily gotten away, but there are some that I have not had much luck trying to find, and I am not sure if this is due to scarcity or not existing in the first place. I have nothing yet for Central Asia or the Baltic states, and I have not been able to really identify existing titles that are aimed at foreign travelers for those regions. There are historical or cultural books about these places published by Soviet state publishing houses, which are still sort of scarce, but they are more ethnographies than guidebooks. Maybe this is due to lack of demand from tourists or because the state wanted to steer foreign visitors away from these places in favor of more Russified parts of the Soviet Union.

I would really like a copy of the 1914 Baedeker's guide to Russia with Teheran, Port Arthur, and Peking as sort of a baseline for the collection. It is considered the last, most comprehensive guide to Russia before the 1917 revolution and had only one edition. It is in the standard Baedeker’s red binding with lots of maps and charts. They are not particularly hard to find online, but the price for a nice copy of this one book would be more than I have spent for the rest of the collection combined, so for now I am trying to see if I can come across one unintentionally.

While in school I worked for Rob Rulon-Miller and Garrett Scott, who remain two of my favorite booksellers due to how much I have learned from both of them. For open shops, my favorite bookstores are those that have room to let things sit and wait. In particular, John King Books in Detroit, located in a 4-story, former shoe factory, and the Book Barn in Niantic, Connecticut, a sprawling complex on an old farm run by a team of wandering cats, are two excellent examples. Globus Books in San Francisco and russkieknigi.com are also great Russian language booksellers.

As an archivist my job is to collect things, in a way. While I am not a minimalist by any means, I personally try to not collect too much to sort of balance things out. If I had a yard though, I would certainly collect plants — a garden is a collection!