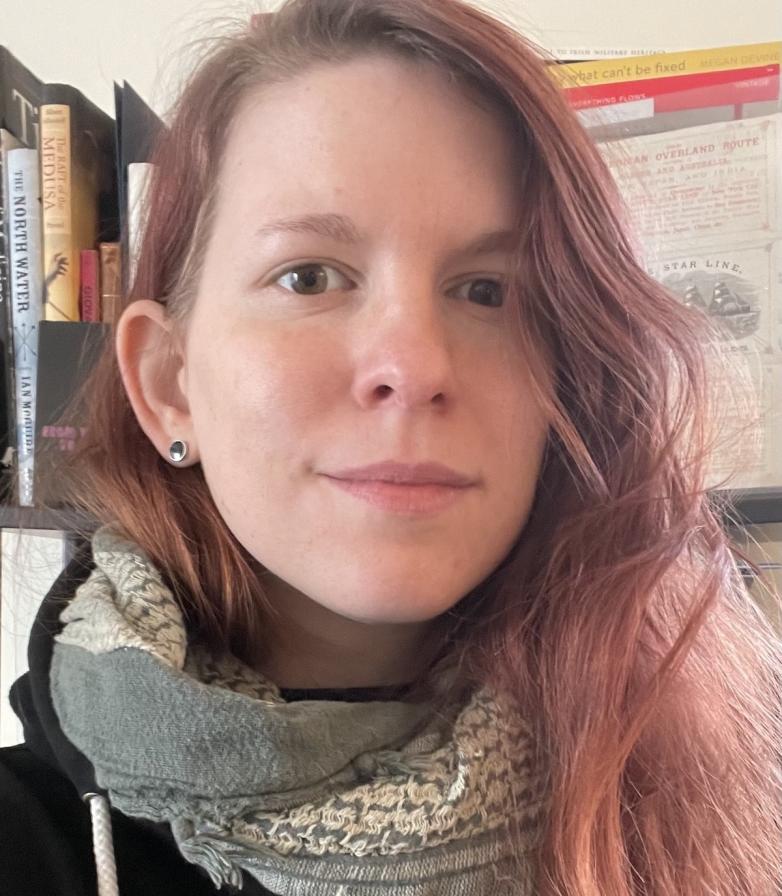 Our Bright Young Collectors series continues today with Alanna Crow of Pittsburgh, Pennsylvania, who was an Honorable Mention in the 2021 Honey & Wax Book Collecting Prize for women collectors aged 30 and younger.

I’m from Texas and live in Pittsburgh, PA.

Before running off to join the book trade I briefly studied history. Through brilliant resources and instructors, workshops, death cafes, volunteering, and other experience I’ve cobbled together a continuing education in thanatology and end of life care. I want to return to school for social work so I can specialize in grief and end of life care for veterans, and work with people seeking abortion care or experiencing miscarriage and other neonatal losses. Currently I’m working as my friend and tattoo artist’s assistant and building my own small book company.

My main focus is how soldiers and military personnel die, prepare for death, and grieve, and the importance of military death to collective grief culture beyond violent nationalism and warhawking. I’m also interested in the many unspoken but common secondary losses in the military experience like long and frequent deployments, the increasingly sharp divide between the civilian and military experience, rampant unemployment, homelessness, and food insecurity, relationship and intimacy issues, suicide, addiction, abuse, the contrasting value of dead war heroes over surviving veterans, and the uses and abuses of dead and disabled soldiers for everything from propaganda to medicine to teeth. I started with nondescript, very traditional photographs of burials at sea and military funerals while a partner was deployed in Afghanistan and have been pulled in every possible direction since.

Drew Gilpin-Faust’s This Republic of Suffering, Death and the American Civil War changed the way I considered the relationship between collective mourning culture and war death, and gutted what I thought I understood about the treatment of military dead and surviving veterans. The first photo postcard of an anonymous World War I military funeral I bought out of untenable grief and need for shock therapy in the purgatorial haze of deployment is taped to the wall above my desk, a reminder that this act of collecting and remembering has been my lifeline through every season of uncertainty and loss.

I greatly admire the frontman of Vision Video, who is an Afghanistan War veteran, firefighter and EMT, and the internet’s hearse driving cat loving goth dad. The way he channels his experience into goth positivity and dance tunes is stunning. I bought their fundraising calendar to cheer me through another pandemic year and am hoping a repress of their record Inked in Red will be out at some point.

In the Wake of Madness by Joan Druett, a gift from Afghanistan.

A collector of wartime posters was selling off his collection, and I bought his vibrant American Library Service war library campaign poster by John Sheridan for what I thought was way less than its worth even before I realized it was dated for Armistice week.

A few one of a kind pictures of dead soldiers were lost in the post chaos, individual photos of men killed in action pulled from scrapbooks that either never arrived or turned up completely destroyed. Even in a time of incredible loss having possibly the last memento of someone turn to mush in your hands is a downer. Most disappointing was a tiny single film cell of a Vietnam era sailor labeled simply in the sloping hand of a buddy “DEAD”, lost forever in the eldritch subspace of the USPS.

Coming across individual photos or stories and the lives attached to them is what draws me to buy something. I stagger over a face or image on ebay or in a small town thrift store and bring them home to preserve until I can figure out better things to do with all the love, death, and grief I’ve accumulated. My grandmother asks if I worry about bringing something haunted back and I laugh, but sometimes these objects have such an odd power to them that I’m not sure. A friend of mine has things in his World War I collection that make me vaguely faint when he just sets them in front of me over coffee. l don’t think anything has made my hands sweat like holding a newspaper printed at the Somme or trying to refold a delicate several foot long panoramic trench map.