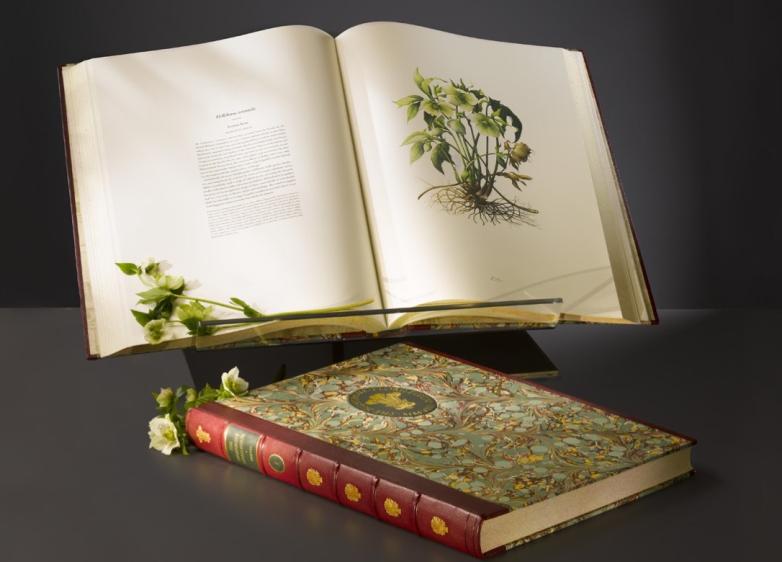 The Highgrove Florilegium, published for The Prince of Wales’s Charitable Foundation, will appear at the fair

Boston – The Boston International Antiquarian Book Fair (BIABF) has announced special events and programs at this year’s fair; kicking off with an Opening Night celebration on Friday, November 11 from 4-8pm; and featuring in-person talks on Women in the American Wilderness with collector Caroline Schimmel & curator Regan Kladstrup (11/12 at 12:30pm); The Architecture and Furnishing of the Private Library with Reid Byers, author of The Private Library (11/12 at 2pm) ; The Ticknor Society Collectors’ Roundtable: Artists’ Books (11/12 at 3:30pm); Booked by Fate: A Life of Dealing in the Exotic World of Rare Books with bookman Phillip J. Pirages (11/12 at 5pm); and The Trials and Triumphs of Collecting Romance Novels with author and collector Rebecca Romney (11/13 at 1:30). As always, the popular FREE Expert Book Appraisals return on Sunday, November 13, from 1-3pm. .

Get a first look at items for sale at this festive preview–an opportunity to browse the collections of U.S. and international dealers (before everyone else!) and to mingle with other bibliophiles, collectors, museum curators, and special collections librarians. Tickets are $25 and can be purchased at the event or online at www.eventbrite.com/e/44th-boston-book-fair-opening-night-tickets-391687737567

When Caroline Schimmel began collecting in the early 1970s, her inquiries on books about women in the American wilderness were met with blank stares. Bookstores didn’t have sections dedicated to women, as authors or subjects. She explained to store owners the category’s inherent appeal, and then she dug through their entire stock to discover overlooked narratives of women tucked in amongst works by male authors. Eventually, her persistence paid off. When returning to those same stores a few years later, she discovered that most now featured sections dedicated to female authors.

Caroline continued to hunt down the obscure and forgotten women who chronicled their adventures and ordeals far from the comforts of civilization. Often hiding behind pseudonyms or obliged to publish anonymously or under their husbands’ names, these women might have been erased from history but for the efforts of Caroline and a new generation of like-minded female collectors who brought their stories to light.

Over the years, online catalogs and auctions have allowed Caroline to widen her net, but it is the personal connections and interactions with book dealers that remain pivotal to building her collection. In this discussion, Caroline and Director of Special Collections Processing at the University of Pennsylvania Kislak Center for Special Collections, Regan Kladstrup. will discuss how the collection of initially less than 800 books has grown to include over 25,000 items including archives, scrapbooks, artwork, and even Annie Oakley’s pink paper-lined steamer trunk.

Caroline Schimmel was born on the east side of Manhattan but moved to Philadelphia at the age of 9 months. She went to the University of Pennsylvania and earned a degree in American Civilization while working at the Library Company of Philadelphia. But it wasn’t until she was in charge of the world-famous Americana collector Thomas W. Streeter’s Collection at Parke-Bernet that she realized that collecting was her calling. At that time, the number of books by women in the collection was minuscule, which was no surprise since men were the Proud Possessors of Americana. What Schimmel assumed was a niche became a grand canyon of hidden history, leading to a robust collection of books, manuscripts, photographs, and ephemera that has spanned the decades since. In 2014, working with Regan Kladstrup, Schimmel donated more than 6,000 works of fiction to the Penn Library.

The Private Library is the domestic bookroom: that quiet, book-wrapt space that guarantees its owner that there is at least one place in the world where it is possible to be happy. The history of its architecture and furnishing extends back almost to the beginning of history and forward toward a future that is in equal parts amazing and alarming. In this talk, Reid Byers discusses the historical influences that have shaped the architecture of our personal libraries, and the furnishings, amenities, and delightful anachronisms that make the mortal room into what Borges famously called Paradise.

Reid Byers is a longtime celebrant of the private library. He has been a Presbyterian minister, a C language programmer, and a Master IT Architect with IBM. The writing of his book, The Private Library, has itself extended through part of the history it describes and has been equally divided between Princeton, New Jersey, and the Blue Mountains of Maine.

The Ticknor Society’s annual tradition of hosting the Collectors’ Roundtable is back in person with a conversation on artists’ books. This year’s participants will discuss the importance and influence of artists’ books in their lives and work.

Darin Murphy, Head of the library at the School of the Museum of Fine Arts, will talk about some of the more interesting books in the library and how students at the school use them in their studies; book collector and the Museum of Fine Arts, Boston book conservator Marie Oedel will highlight artists’ books in her collection, particularly those that have informed her conservation work; and Meredith Santaus, Gallery Manager at Bromer Booksellers & Gallery, will present a dealer’s perspective on buying and selling artists’ books that have a focus on issues of social justice. Join us for what promises to be a fascinating and visually stunning conversation!

And don’t miss the start of the program, when we will announce the recipient of the 2022 George and Anna Eliot Ticknor Book and Book Culture Collecting Prize, who will receive $1000 and a free year’s membership to The Ticknor Society.

Author Phillip Pirages reads from his book “Booked by Fate,” a 300-page account that comprises a narrative covering Pirages’ 45 years as a bookman. It features friends and detractors, benefactors and malefactors, and an assortment of fascinating characters met along the way: the leaping priest who invited Pirages to Italy to buy from his library, then refused to show Pirages his books; the pungent residents of a crumbling house with shag carpeting and a pet goose, but also with handsome, hidden-away treasures in the form of early technological treatises; the apiarist who paid Pirages for Bibles with honey and gold; and the dowager who outlived four wealthy husbands but slept on just half a bed, the other half being occupied by a group of her favorite volumes. Those in the know will nod their heads in recognition at some of the scenes and episodes and will surely know some of the featured players (there is an index to help), and those who read in an effort to know more about the world of rare books will find the volume the source of information and insight as well as the diverting story of personal struggle and adventure.

In this lecture, co-hosted by The Bibliographical Society of America, Rebecca Romney describes the obstacles she faced in building a collection of popular romance novels, as well as the opportunities presented by hunting in an area where little bibliographic work has yet been accomplished. The romance genre has commonly been misunderstood by those not personally familiar with the genre, a reality which can make the task of the collector additionally challenging. Working without many exterior resources and references, the project required practicing bibliography in the wild: purchasing a dozen copies of the same book to identify the differences between printings; reaching out to publishers for information on their file copies or publishing records; taking a flyer on a book that’s terribly described, but costs only the price of shipping. Sometimes when there is no clearly defined path, you must make one yourself.

Rebecca Romney is the co-founder of the rare book firm Type Punch Matrix in Washington. D.C., as well as an author and a book collector. She is the author of THE ROMANCE NOVEL IN ENGLISH: A Survey in Rare Books, 1769-99, which documents her collection of popular romance novels that was sold en bloc to the Lilly Library in 2021. A full PDF of the catalogue is viewable at typepunchmatrix.com.