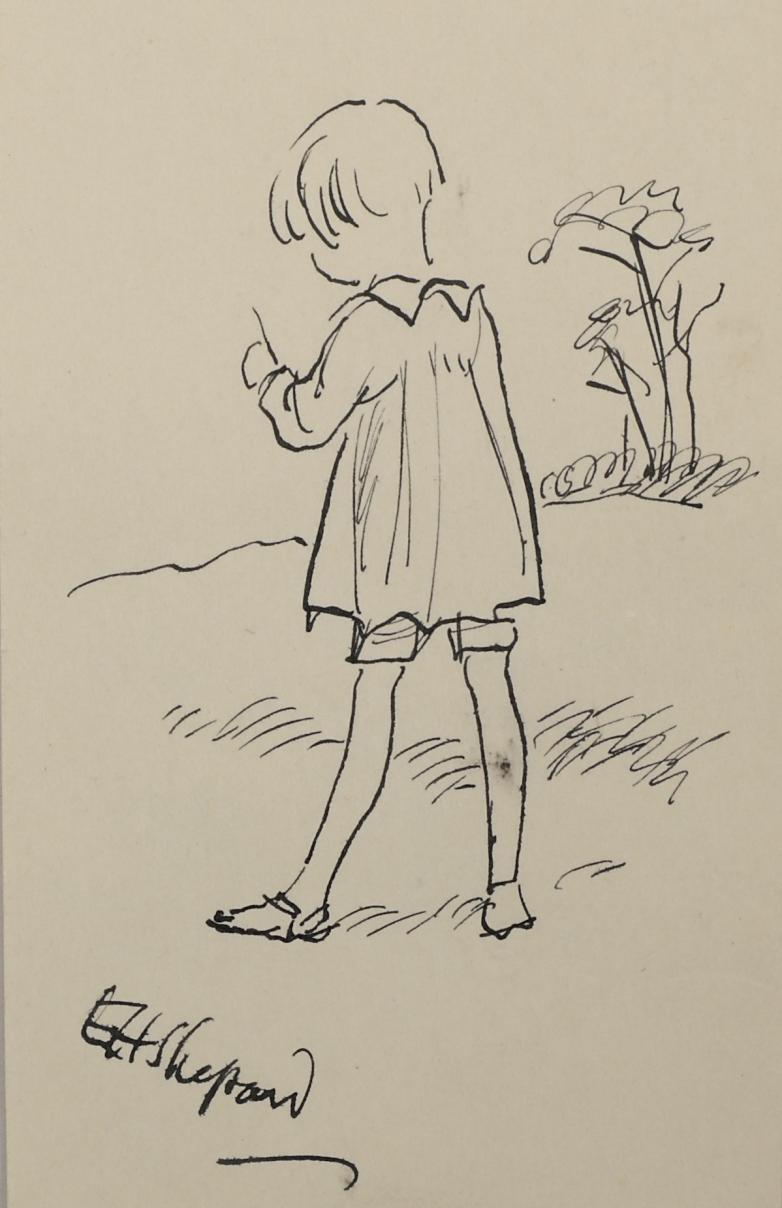 Leyburn, North Yorkshire, England — A small pen and ink sketch of Christopher Robin by E.H. Shepard is one of the top lots in Tennants Auctioneers’ Books, Maps, Manuscripts and Photographs Sale on 18th November, which will be an online sale. The sketch, in which Christopher Robin faces away, is signed by the artist and is accompanied with a manuscript note on headed paper reading ‘with [heart] and xx from Christopher Robin’. Both the sketch and the note are mounted in an autograph book compiled by Miss Joyce Cartmell from 1937 onwards, which also contains the signatures of John Buchan and Gracie Fields (estimate: £2,000-2,500 – all estimates exclude buyer’s premium).

A further lot from the collection of Miss Joyce Cartmell is a signed note from Arthur Ransome on notepaper printed around the margins with illustrations from Ransome’s Swallows and Amazons books. The note explains that ‘Titty is short for Tittymouse which is what she was called when she was a baby. Nobody ever calls her anything but Titty now’, and that ‘Windermere is the lake, a bit disguised’. It appears he has been asked for a photograph, to which he responds, ‘Too ugly’. The note is sold in the original envelope addressed to Cartmell, postmarked 1939, and accompanied by a small card signed by Ransome with a pen and ink sketch of a sailing boat which has been taken from her autograph book described above. The lot is sold with an estimate of £1,000-1,500.

An outstanding collection of early aviation photographs are on offer in two lots. The first lot, being sold with an estimate of £500-800, comprises forty-seven photographs recording what is believed to be the first air race or aviation meeting on the continent of Africa, which was held at Heliopolis in Egypt 6th – 13th February 1910. Aircraft both on the ground and airborne are shown in the photographs, as well of scenes of spectators. Each photograph bears a blindstamp signature of O. Diradour, Cairo. The meeting drew large numbers of the European residents of nearby Cairo; flying conditions were difficult, and there were several crashes, however, the meeting saw the awarding of the first pilot’s license to a woman – ‘Baronesse’ de Laroche. Also on offer, with an estimate of £300-500, is a group of twelve glass positives recording a very early French air race, the Semaine d’Aviation de Lyon, which took place from 7th – 15th May 1910. The images depict aircraft grounded, airborne, and one crashed.

A small collection of books on Middle Eastern History are on offer with an estimate of £600-1,000. The collection, which is accompanied by a small archive of letters, postcards, press cuttings and a photograph, are all signed by Violet Dickson, the author of two of the books and contributor to the others. Violet Dickson lived in Kuwait for 61 years, having moved to the country with her husband who was a colonial administrator. She published several books on the country, and was an amateur botanist; indeed, she sent wildflowers she collected to Kew Gardens and had a plant named after her having first introduced it to the scientific community. Dickson was fluent in Arabic and lived as a widow in the country for thirty years. She remained a vital resource for British diplomats in the region due to here knowledge of and connections in the region. Included in the collection of books are Dickson’s own ‘The Wild Flowers of Kuwait and Bahrain’, 1955, and ‘Forty Years in Kuwait’, 1971, and her husband’s ‘Kuwait and Her Neighbours’, 1956.

Further interesting lots in the sale include Transactions of the Guild and School of Handicraft, Vol. 1, 1890, with manuscript inscriptions by the volume’s editor and founder of the Guild C.R. Ashbee. Ashbee, who was one of the leading figures of the Arts and Crafts movement, inscribed on the flyleaf is a verse from Rudyard Kipling’s The Conundrum of the Workshops (estimate: £600-1,000). From a collection of early 20th century art books in the sale comes volumes relating to The Vorticists, on offer with an estimate of £600-1,000. The lot comprises two volumes of Wyndham Lewis’ Blast, Review of the Great English Vortex and Ezra Pound’s Gaudier-Brzeska, A Memoir. Also of note are two volumes of the Vanity Fair Album, A Show of Sovereigns, Statesmen, Judges and Men of the Day by Juhu Junior from 1870 and 1871, which are composed of rare proof copies of the Vanity Fair cartoons (estimate: £1,000-2,000).

A fully illustrated catalogue will be available at www.tennants.co.uk.