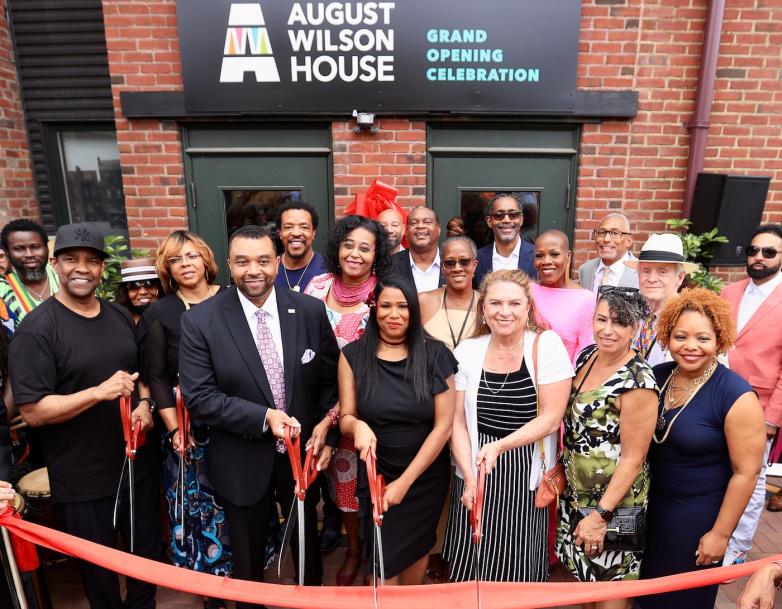 August Wilson House supporters and board members participated in the official ribbon-cutting ceremony at the grand opening celebration in Pittsburgh on August 13.

Last month, the August Wilson House opened in Pittsburgh after a yearslong renovation.

Wilson (1945-2005) twice won the Pulitzer Prize for Drama: for Fences in 1987 and The Piano Lesson in 1990. He is best known for ten plays called the American Century Cycle, or the Pittsburgh Cycle, which describe the experiences of Black Americans. All are set in Pittsburgh, except Ma Rainey’s Black Bottom, which is set in Chicago and was adapted into a multi-award-winning film in 2020.

Wilson’s childhood home at 1727 Bedford Avenue in Pittsburgh's Hill District had been abandoned since the late nineties. After Wilson’s death, his nephew, Paul Ellis, formed the Daisy Wilson Artist Community, named for the playwright’s mother, and began the journey toward creating the August Wilson House.

On August 13, a ribbon-cutting ceremony at the house brought together supporters, including Wilson's widow, Constanza Romero Wilson, and Denise Turner, chief executive of the August Wilson House. Actors Denzel Washington and Russell Hornsby, who played Lyons in Washington’s 2016 film adaptation of Wilson’s Fences, also attended the event. Both have helped to spread the word about the restoration campaign. “I love August Wilson. He touches my soul, our souls in a way that no one that I’ve ever read has,” Washington said.

Beginning this fall, the space will be used as an arts center for programming, workshops, and panel discussions, as well as the destination for resources related to Wilson’s life and work. A small outdoor stage located behind the home will serve local theater and is currently hosting the Pittsburgh Playwrights Theater Company’s production of Wilson’s  Jitney through September 18.