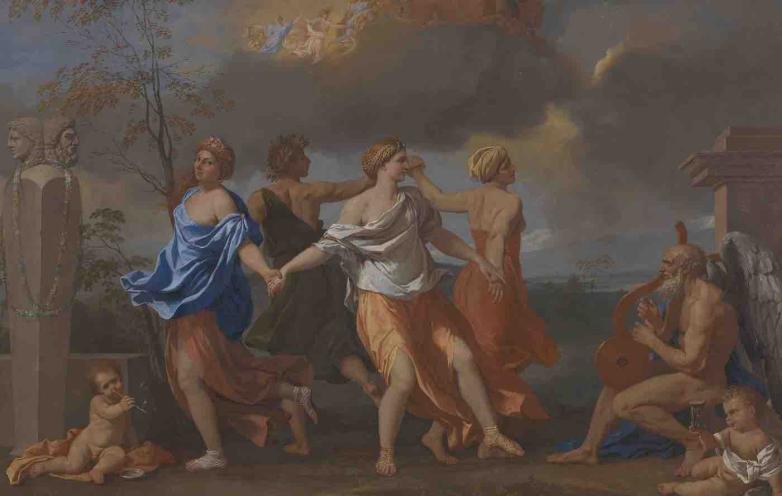 ©The Trustees of the Wallace Collection

2021 marks seventy years since the first volume in Anthony Powell’s twelve-volume series A Dance to the Music of Time was published (more on this in our autumn issue). By happy coincidence, the National Gallery in London and the Getty Center in Los Angeles have organized an exhibition devoted to the work of the man whose painting inspired Powell.

Poussin and the Dance celebrates a selection of twenty paintings, drawings, and recreations of wax figurines by French artist Nicolas Poussin on the subject of dancing. These bacchanalian works which show numerous men and women having a rather joyously wild and sensuous time were produced by Poussin from his time in Rome between 1624 and 1640. They have been brought together from from public and private collections around the world for the first time.

Among them is his iconic A Dance to the Music of Time in which four figures – often taken to be a reference to the seasons – dance in a circle in a classical setting, serenaded by an elderly man (whom Powell described as a “trifle sinister”) representing time and maybe death. The painting, on loan from the Wallace Collection in London, is the central inspiration for Powell’s sequence. He first mentions it right at the start of volume one, A Question of Upbringing, and again later in the series, complementing his idea that people are in a constant ‘dance’ with a series of partners who appear and then disappear throughout life.

Poussin and the Dance runs at the National Gallery in London through January 2, 2022 and then travels to the Getty Center in Los Angeles from February 15 to May 8, 2022.