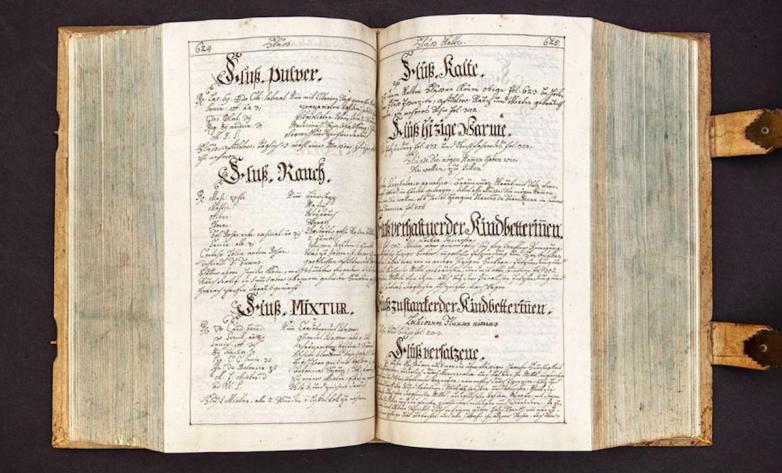 It may come as a surprise to learn that some executioners also practiced medicine. A 1,500-page manuscript recently acquired by the Huntington Library, Art Museum, and Botanical Gardens in California reveals its author, a German executioner named Maximus Fidelis Steigendesch (1730–1810), aka Deigendesch, as an expert in “executioner’s medicine.” If that sounds like dark humor, it’s not. According to the Huntington, Steigendesch hailed from a family of executioners, knackers (“a person who disposes dead or unwanted animals”), and skinners, whose knowledge of anatomy and physiology, such as it was, qualified him to be a part-time healer.

“If asked to think of a typical medical practitioner, many today would probably picture a highly educated professional wearing a white coat and a stethoscope,” said Joel Klein, Molina Curator for the history of medicine and allied sciences at the Huntington. “While such an image may ring true, if we look back further, we see a medical marketplace with diverse healers who defy the type. One of the most surprising and remarkable groups of such practitioners were the many executioners in early modern Europe who also saw patients or compounded medicines.”

Instead of a list of those he had dispatched, the executioner’s manuscript “Hortus Sanitatis” (Garden of Health) describes ailments—e.g., “Zwerchfalls-Entzündung” (diaphragm inflammation)—and methods of diagnosis, as well as remedies, including an extensive collection of recipes for specific medicines. Composed over a decade, the manuscript demonstrates the executioner’s understanding of the living body, which perhaps came in handy when he had to terminate one.

“This unique manuscript has much to tell us not only about early modern medical practice, but also about the relationship between medicine, criminal justice, and the authority of the state,” Klein said.

The bound manuscript was one of several noteworthy historical items added to the Huntington Library collection, including botanical drawings created by Countess Mary Macclesfield (ca. 1761–1823) and her daughter Lady Elizabeth Parker Fane (1751–1829); a half plate ambrotype of the Beecher family ca. 1860; an 1859 travel diary about Nagasaki, Japan, and Ningbo, China; and the papers of the Woodbridge and Michaelis Families, 1832–1890.