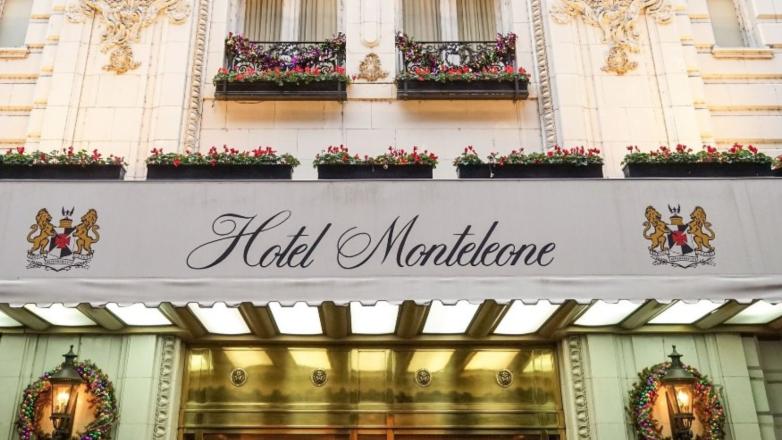 The Hotel Monteleone is celebrating its 125th anniversary and since 1999 has owned the title of Literary Landmark awarded by the American Library Association, a distinction shared with only three hotels in the country. The Monteleone has long been a favorite haunt of distinguished southern authors with many immortalizing the hotel in their work. Richard Ford, Truman Capote, Ernest Hemingway, Tennessee Williams and William Faulkner always made 214 Royal Street their address while in New Orleans. Although you may not stay in the exact room where they penned their prose, you can definitely feel the vibes sitting at the Monteleone Carousel Bar. Join me as we toast the Monteleone and learn more about this literary legend as noted in the book, Hotel Monteleone: More than a landmark, the heart of New Orleans since 1886.

The Carousel Bar is one of my favorite places to share a cocktail with my publishing peeps.  Besides the delightful whirl of the bar itself, fantasies of sharing the same creative energy of Truman Capote or Ernest Hemingway is enough reason to slowly savor a mint julep. According to the book the bar operates much the same way it did in its 1949 debut--a single motor turns two thousand rollers beneath the floor moving the barstool/chairs on a track around a central stationary bar.

A young screenwriter once told me that he gained a lot of his characters sitting in a Waffle House restaurant in the wee hours of the morning. Sipping coffee he would jot down descriptions of the people and ease drop on conversations. Albeit quite a step up from a greasy spoon restaurant, the Monteleone commands attention from authors seeking intriguing plots, characters and to socialize with other writers.

The book shares the hotel's early history and growth, food and entertainment, and my favorite chapter---prose, plots and bon vivants.

Here's a sneak peak into some of the Monteleone's noted authors:

William Faulkner arrived in New Orleans in the 1920s and fell in love with the city returning with repeated visits over the next several decades. He spent part of his honeymoon at the Hotel Monteleone and in the same years produced some of his most prized work, Sound and the Fury. His spirit stays alive in the city and the hotel through the New Orleans based Pirate's Alley Faulkner Society and the annual Words & Music event held at the Hotel Monteleone every November.

Tennessee Williams was so enamored by the New Orleans saints and sinners, he became a resident and captured the city's alluring charm in his plays. He loved the hotel and spent countless hours in the Carousel Bar in search of plots and gossip. But his characters were drawn from the days and nights spent in his stays at the Hotel Monteleone. The Tony Award winning play Rose Tattoo used the hotel as a symbol of the city's dichotomy and forward thinking.

Truman Capote was practically born in the Monteleone when his 16 year-old beauty queen mother, Lillie Mae Faulk, went into labor while living at the hotel. His name is synonymous with the hotel and the bar as he warmed the bar stools for many years taking notes of the world around him.

Richard Ford spoke at the hotel's 1999 Literary Landmark dedication and shared his heartfelt memories of stays with his parents. It left such an indelible mark that the hotel found its way in many of his books. Proceeds from his first work, A Piece of My Heart, was dedicated to the hotel. From the Monteleone book he confides, "Not a bad beginning for a boy on his way to be a writer."

Experience the same inspiration in anniversary functions held throughout the year as well as  the Tennessee Williams Festival in March, Tales of the Cocktail in July and the Faulkner Words & Music festival in November.