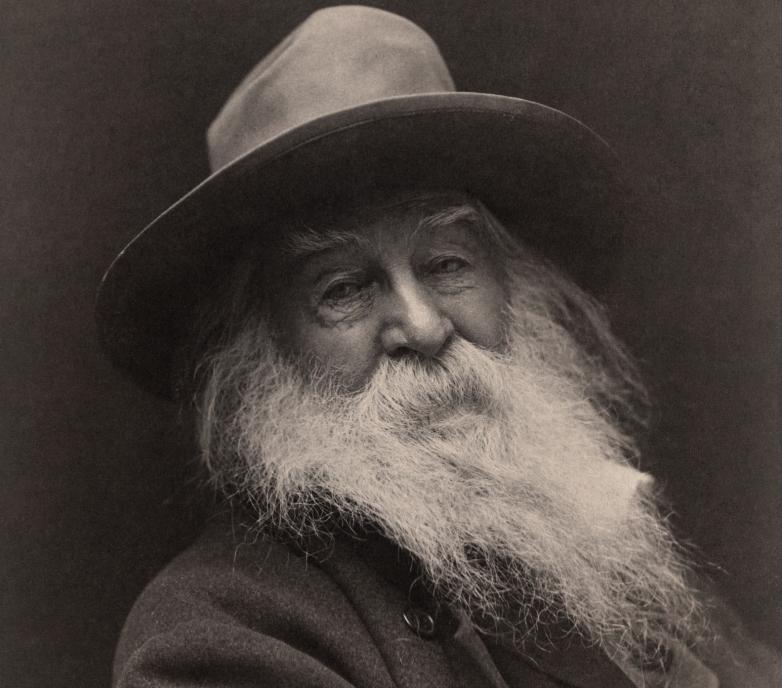 On January 28, 2009, Dr. James Hutson, Chief of the Manuscripts Division at the Library of Congress, sent a letter to manuscript and special collections librarians concerning certain Walt Whitman notebooks which went missing from the Library in 1942. Enclosed with the letter was a 1954 brochure, "Ten Notebooks and a Cardboard Butterfly Missing from the Walt Whitman Papers," which describes the missing items.

The brochure's introduction notes that the notebooks were given to the Library of Congress by Thomas B. Harned in 1917-18. Harned was one of three executors to Whitman's literary estate, and he presented his portion of the Whitman papers (some 3,000 items) to the LC so that they could be consulted by the public. In 1942 the Whitman papers were evacuated from Washington, D.C., and were stored until October 1944 in a "separate and continuously guarded area of a Mid-Western library." When the collection was unpacked, curators discovered that ten notebooks and Whitman's cardboard butterfly were missing, even though the seals on the packing cases had not been broken.

When searches failed to turn up the missing items, library staff collected "every scrap of evidence regarding the use and users of the Papers from 1925 on and the assistance of the investigative agencies of the Federal Government was enlisted." Investigators concluded that the notebook collection was complete as late as April 1941. The 1954 brochure was drawn up and distributed to identify and (hopefully) lead to the recovery of the missing items.

More than forty years passed before there was a break in the case. In 1995, a New York man took four of the notebooks and the cardboard butterfly to Sotheby's, where a vice president in the Books and Manuscripts division identified them as belonging to the Library of Congress.  The man said that his father had received the items as a gift more than thirty years before. These notebooks included the "Earliest Notebook" (now scanned), which dates from 1847 and  "contains about 47 small leaves densely written in pencil with aphorism, observations, and extensively revised poetry, including early drafts of 'Song of Myself'."

The four notebooks and the butterfly were returned to the Library of Congress and conserved (gallery here). All are now available in digital form online at the LC's "Poet at Work" collection.

But the other six notebooks remain missing, and the purpose of Hutson's letter of January 28 is to revive interest in the case and spur further searches for the remaining items. Hutson asks librarians to "search your holdings for any of the remaining six notebooks which may have been sold or donated to your library over the last 65 years. Some of the notebooks could be disassembled and exist as manuscript pages." It seems important that collectors and book dealers know of these items too.

The notebooks still missing are:
- Fugitive Slave Law, a leather-bound notebook "containing autobiographical notes for 1826-48, subjects for articles, and notes on English history and literature."
- Tintype notebook, "containing suggestions for poems, directions for story writing, and the original draft of the poem 'That Shadow My Likeness'."
- American Opera notebook, "containing two passages on American opera and notes toward the poem 'Bridalnight'."
- Hospital Notebook No. 3, "containing soldiers' addresses, notes on patients, and a draft of the poem, 'I Heard the Blue Birds Singing'."
- Oratory note and scrapbook, "being mostly blue paper scraps pasted inside the covers of an old book which includes a 38 page 1857 pamphlet by C.M. Nairne."
- The Reading Book, "consisting of Whitman poems printed on galley sheets and pasted in."

Hutson: "The above still missing notebooks are the property of the United States Government. I deeply appreciate your efforts in attempting to locate these materials. If there are questions, please contact Dr. Alice L. Birney, Literature Specialist, Manuscript Division, 202-707-1090 or abir <at> loc.gov."

If you have any information about these items, please pass it along to Dr. Birney. You could help solve a mystery.