Notebook of John Wickins with transcripts of letters and sermons from Isaac Newton. Estimate: £20,000-30,000

London — Many great figures of the past had an amanuensis, the humble, often anonymous, scribe or secretary who recorded their thoughts and sayings for posterity. Occasionally, amanuenses found their own place in history; James Boswell, whose celebrated Life of Samuel Johnson captured so many of the great lexicographer’s observations, is a case in point. Isaac Newton’s amanuensis, collaborator and friend John Wickins, may not be a household name, but he played an important role in the mathematician’s life and career.  His handwritten notebook, unseen for 140 years and containing transcripts of three letters from Newton, is to be offered at Bonhams Fine Books and Manuscripts sale in London on Wednesday 31 March. It is estimated at £20,000-30,000. 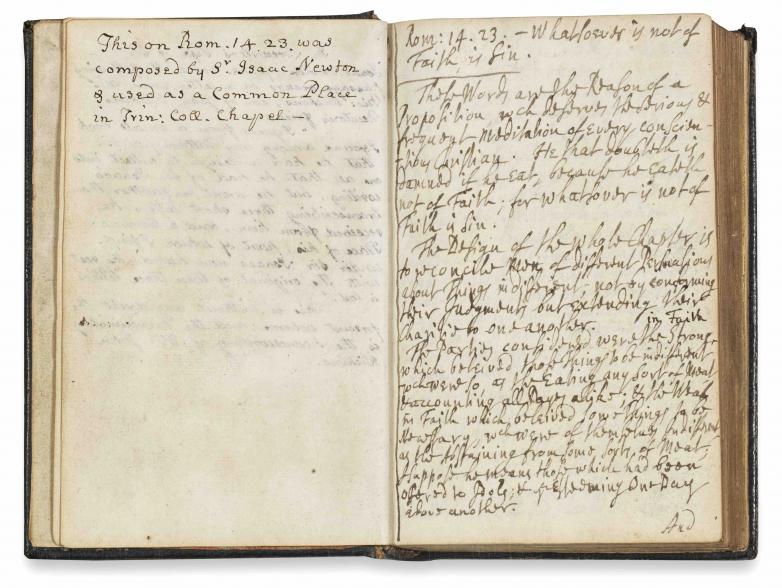 Although little is known of the life of John Wickins, he was from 1665-1683, Isaac Newton’s chamber-fellow – roommate – at Trinity College Cambridge where they were both Fellows. Wickins acted as Newton's amanuensis, copying up his notes, turning their rooms into a laboratory and taking on the role of unpaid assistant, a task which was often arduous and dangerous. They worked together on Newton's third telescope (the so-called 'Newton-Wickins' telescope) built 1671-72. This was the telescope which appears in Newton's Opticks: or, A Treatise of the Reflexions, Refractions, Inflexions and Colours of Light published in 1704, one of the greatest and most important ever works of science.

Newton’s first letter, believed to date from around 1672, finds him in combative form over a dispute with the Jesuit Father Linus about his particle theory of light, published in the Royal Society's Philosophical Transactions in 1672. “I sent 'em an answer to the substance of their letters & laid upon their shuffling tricks - & so I think I have made an end of the business..."

Robert Hooke was another antagonist and Newton reassures Wickins that, despite Hooke’s machinations he is continuing his work on the telescope they had both been developing. “A glass-grinder in London had this spring undertaken to make a two-foot telescope after my way but meeting with Mr Hook & some other virtuosi they dissuaded him from attempting it. So, Cooper & I am going to work.. Mr Cooper has a tool made..”

As a fellow of Trinity, Newton was obliged to take holy orders and in the second letter, from 1677, is so much more preoccupied with theological issues than science that he notes tetchily, "...I think not of the telescope...".

In the third letter third dated 19 August 1682, Newton explains the difficulty of recommending books to Wickins – "...for what pleases me may not after perusal please you & then they will be but lumber to you..." – and provides a running commentary on his theological studies – “Jerome is worth having for his learning though not for his religion...".  In the end, Newton became so exasperated that he threatened to resign his fellowship if Trinity College insisted on his ordination and the requirement was waived.

Bonhams Head of Fine Books and Manuscripts Matthew Haley said: “These three letters show a flesh and blood Newton, preoccupied with work, railing against his opponents, and worrying that his book recommendations might not go down well – we can all sympathise with him there. Newton and Wickins were clearly friends as well as colleagues – he signs off one letter 'your very loving chamber-fellow, Is. Newton' – and the letters stand as a testament to their friendship as well as an insight into the human side of the great natural philosopher.”