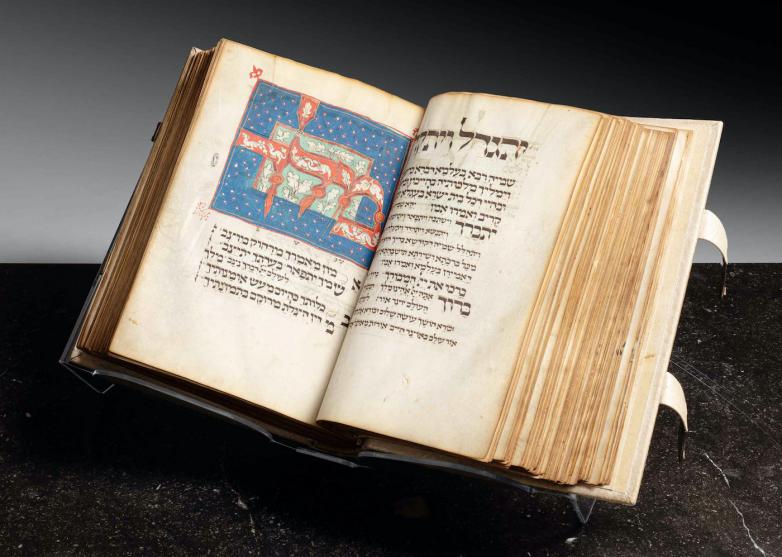 The Luzzatto High Holiday Mahzor is estimated to sell for $4-6 million.

New York -- As Jewish communities around the world are set to observe the two holiest holidays on the Jewish calendar – Rosh Hashanah and Yom Kippur – Sotheby’s is pleased to announce that it will offer the earliest illustrated Hebrew Prayerbook to ever appear at auction. Produced in Southern Germany during the late thirteenth/early fourteenth century, The Luzzatto High Holiday Mahzor is a scribal masterpiece that attests to the vibrancy of the medieval Jewish community in Europe.

Written in a distinctive and elegant Hebrew script by a Jewish scribe-artist in the region of Bavaria, over the ensuing centuries, The Luzzatto High Holiday Mahzor found new homes in Alsace, the Lake Constance region, Northern Italy, and France. Numerous notes and annotations handwritten in the manuscript’s margins bear witness to its many journeys through different countries. At each step of the volume’s journey, its new owners adjusted the text to reflect contemporary local custom and practices, adding to the prayerbook’s complexity and richness, as well as showcasing the deeply personal histories of the communities that cherished it.

The tradition of illustrated Hebrew prayerbooks first began to flourish in Southern Germany in the mid-thirteenth century and only a small number – believed to be less than twenty – are known to exist. Of those examples, none is known to be in private hands.  As such, The Luzzatto High Holiday Mahzor is undoubtedly the most important medieval illustrated prayerbook to come to market in a century.

The mahzor is named after its illustrious owner, Samuel David Luzzatto (1800-1865), a distinguished Italian Jewish scholar, poet, theologian and renowned antiquarian book collector. After Luzzatto’s death, many of his manuscripts and rare printed books were acquired for the collections of major European cultural institutions. In 1870, this important mahzor was purchased by the library of the Alliance Israélite Universelle (AIU) – the first modern international Jewish organization – founded in 1860 in Paris. On offer from the collection of The Alliance Israélite Universelle, the prayerbook will be sold in New York on 19 October with an estimate of $4/6 million. Proceeds from the sale will be used to support AIU’s educational mission, and advance its plans for future educational projects, scholarships for students wishing to attend Jewish school, new programs related to special needs students, and digital transformation needed for the dissemination of Jewish culture to the wider public.

Sharon Liberman Mintz, Senior Consultant of Books and Manuscripts at Sotheby’s, stated: “This seven-hundred-year-old prayerbook opens fascinating windows onto the lives, rites, and rituals of medieval and early modern Ashkenazic Jewry. Its text, which holds the potential to expand our knowledge of liturgical history in several different regions of Europe, certainly merits further research, and its illustrations shed light on Jewish ceremonial practice in the Middle Ages. The fact that it was created by a Jewish scribe-artist at a time when many medieval Hebrew manuscripts were illustrated by Christian artists is especially noteworthy. The elegant calligraphy and beautiful program of decoration make this a splendid, exceedingly rare manuscript worthy of the most important public and private collections worldwide.”