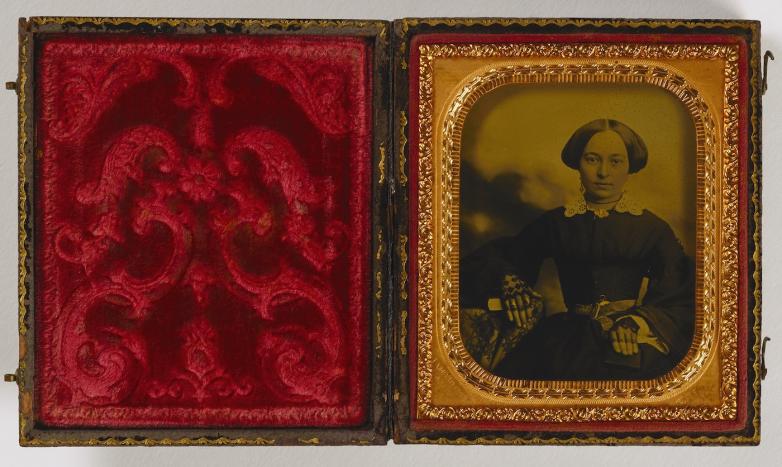 Washington, D.C. — The Smithsonian American Art Museum has acquired a collection of objects related to early American photography from the collector Larry J. West that transforms the museum’s photography holdings. The L.J. West Collection includes 286 objects from the 1840s to about 1925 in three groupings: works by early African American daguerreotypists James P. Ball, Glenalvin Goodridge and Augustus Washington; early photographs of diverse portrait subjects and objects related to abolitionists, the Underground Railroad and the role of women entrepreneurs in it; and photographic jewelry that represents the bridge between miniature painting and early cased photography such as daguerreotypes, ambrotypes and tintypes.

With this purchase, the museum now holds the largest collection of daguerreotypes by the three early African American photographers Ball, Goodridge and Washington and establishes itself as a center for research and new scholarship in this field.

“We are grateful to visionary collectors like Larry West who choose the Smithsonian as the permanent caretakers of their beloved collections, where they join other national treasures held in trust for the public benefit,” said Lonnie Bunch, Secretary of the Smithsonian. “As a historian, I especially value Larry’s persistent pursuit of artworks and material culture that serve to illuminate an important time in the history of this nation and will help future historians and visitors to the Smithsonian understand the early American experience in a more inclusive manner.”

“The extraordinary works collected by Larry West will bring visitors and scholars alike to the Smithsonian American Art Museum as the holder of the preeminent collection of work by the early African American studio photographers James P. Ball, Glenalvin Goodridge and Augustus Washington,” said Stephanie Stebich, the Margaret and Terry Stent Director. “The talented curators and educators here at SAAM will share the many layered stories these captivating photographic images reveal in a dedicated permanent collection gallery.”

West is a collector and historian of 19th-century photography, who has been gathering this material for more than 45 years. He bought his first daguerreotype in 1975, one depicting an African American man in a tuxedo. He offered his collection to the museum in recognition of its longstanding commitment to collecting and caring for works by Black artists.

To put the exceptional nature of this collection in context, approximately 166 daguerreotypes by Ball, Goodridge and Washington are known to have survived to the present, though others currently unknown may be held privately by families or collectors.

“When it came time to place the three collections that I have nurtured all these 45 years, the Smithsonian American Art Museum was the obvious best choice with its reputation for fostering research and new scholarship and the plans presented by its curators to feature objects from these collections, in conversation with paintings and sculpture from the same time period, in the public galleries,” West said. “For collector-researchers like myself, this use of the objects and research findings is critical. It proves that anything a current collector has is not ‘owned,’ we are merely custodians for them.”

Selected artworks from the West Collection will be the centerpiece of the museum’s forthcoming early American photography gallery, part of an ongoing re-installation of the permanent collection galleries. The theme of the gallery is the democratization of portraiture. It is essential that works by non-white and women photographers and portraits of subjects across racial and class identities are displayed to accurately tell this history. Like miniature painting, early photographic portraits were made for circulation within private gift networks. Photography succeeded painted portraiture by expanding those networks, enlarging opportunities for self-representation. These objects show early evidence of diversity, in the faces of those who had such tokens made as well as those who wore them.

“The acquisition of Larry West’s incredible collection enhances and deepens the museum’s photography collection and positions us to tell important American stories,” said John Jacob, the McEvoy Family Curator for Photography at the Smithsonian American Art Museum. “The near absence of diverse portrait sitters and non-white photographers from many early American photography collections, including SAAM’s, is ahistorical. Significantly, SAAM now can show an inclusive history of photography, with African Americans among its earliest practitioners, conveying to viewers their contributions as innovators and entrepreneurs.”

In addition to the artworks, the museum acquired West’s extensive library, including a treatise authored by him detailing his research, analysis and conservation of the collection, and his metrics for authenticating individual works. These materials will be available to fellows, researchers and visiting scholars as a major resource for the field.

The materials join the museum’s other important tools for new scholarship, the Nam June Paik Archive, the Joseph Cornell Study Center, six online art-research databases with more than a half-million records, including the Inventories of American Painting and Sculpture that document more than 400,000 artworks in public and private collections worldwide, and extensive photographic collections documenting American art and artists.
Art by African Americans at the Smithsonian American Art Museum

The Smithsonian American Art Museum is home to one of the most significant collections of African American art in the world. Beginning in the mid-1960s the museum acquired major works, including Sargent Johnson’s “Mask” and James Hampton’s visionary installation, “The Throne of the Third Heaven of the Nations’ Millennium General Assembly,” and works by Romare Bearden, William H. Johnson and Alma Thomas. In 1980, the museum acquired works by 19th-century artists Joshua Johnson, the earliest documented professional African American painter; Edward Mitchell Bannister; Robert S. Duncanson and Henry Ossawa Tanner; and neoclassical sculptures by Edmonia Lewis, the first professional sculptor of color. Six years later, the museum acquired more than 400 works by folk and self-taught artists from the holdings of Herbert Waide Hemphill Jr. A significant number of artworks in the collection are by African Americans, including William Edmondson, Sister Gertrude Morgan, Elijah Pierce, Jimmy Lee Sudduth, Bill Traylor and Inez Nathaniel-Walker.