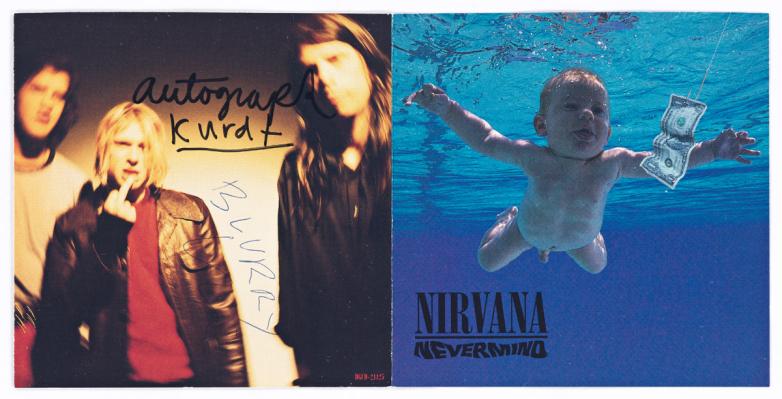 Leading the autographs portion of the sale is a scarce signature from Nirvana frontman Kurt Cobain, estimated at $40,000 to $60,000. On offer, in a season marking 30 years since the album’s release, is a signed Nevermind CD, which comes to auction through a former employee of Tower Records who had Cobain sign the CD during Nirvana’s in-store performance at the East 4th Street location in September of 1991.

Other autograph highlights include those by popular literary figures, politicians, and scientists. Mark Twain is on offer with a signed receipt for payment of the Mark Twain Public Library Tax—in 1908, after moving to Redding, CT, Twain formed the Mark Twain Library Association, intending to build a public library for the community, humorously imposing a single dollar tax upon his visitors to raise funds for a building ($10,000-15,000). Herman Melville is present with an autograph letter signed in 1888, written to his wife’s cousin, sending her one of his books ($8,000-12,000).

From Simón Bolívar, written as President of Gran Colombia in 1828, is a lengthy letter signed to the first president of Bolivia on war with Peru and Spanish invasion ($10,000-20,000); while American politicians include an archive of 19 typed letters from Franklin D. Roosevelt, some as president to, onetime fellow New York state senator John Godfrey Saxe II, dating from 1920 to 1942 ($8,000-12,000).

Remarkable finds from scientists, feature a 1928 lithographic portrait by Emil Orik of Albert Einstein, signed by both ($5,000-7,500). Also on offer is a group of autograph letters signed by Nikola Tesla, including one from March 1895 thanking for sympathy expressed after his Fifth Avenue laboratory burned to the ground stating, “I am not broken in spirit, quite the contrary” ($8,000-12,000).

The literature portion of the sale includes four books from the personal library of Jorge Luis Borges, with his characteristic notations ($1,500-2,500); a finely bound example of Moliere’s Oeuvres; Nouvelle Édition, 1734 ($1,200-1,800); the first copy of Robert Louis Stevenson and Lloyd Osbournes’s The Ebb-Tide. A Trio and Quartette, 1894, to appear at auction in the exceedingly rare dust jacket; as well as a run of Russian Constructivist works.

Exhibition hours are 12 p.m to 5 p.m from October 25 through October 27. Appointments are strongly encouraged and can be scheduled directly with a specialist. Swann Galleries staff will prepare condition reports and provide additional photographs of material on request. Advance order bids can be placed with a specialist for the sale or on Swann’s website, and phone bidding will be available. Live online bidding platforms will be the Swann Galleries App, Invaluable, and Live Auctioneers. The complete catalogue and bidding information is available at www.swanngalleries.com and on the Swann Galleries App.