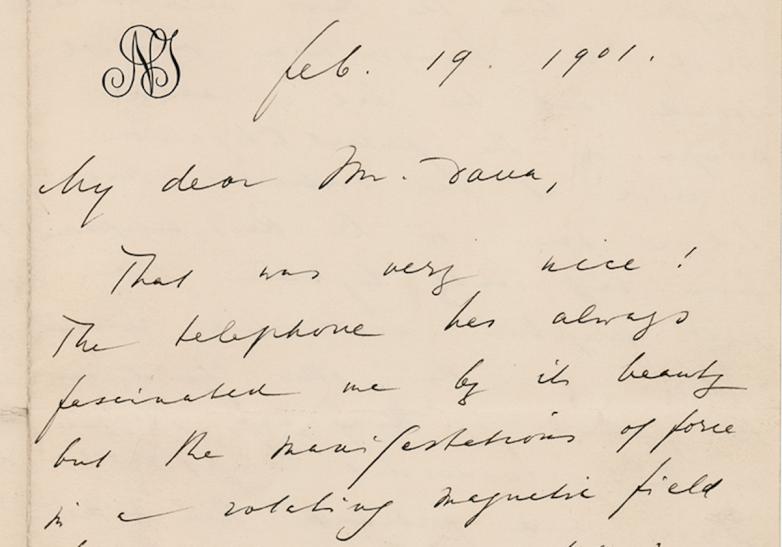 Boston — A Nikola Tesla letter discussing his place among America's greatest inventors sold for $341,295 according to Boston-based RR Auction.

On personal monogram letterhead, the four-page letter signed "N. Tesla," February 19, 1901. The handwritten note to "Mr. Dana," evidently New York Sun editor Paul Dana. In part: "The telephone will remain forever useful and so, probably, will my invention for it permits the use of the sun's energy in the simplest and most economical manner and also because it is hard to imagine a simpler machine than my motor with an armature driven without mechanical and electrical contact. But the incandescent lamp will soon be doomed and Edison's work in the field will have only a historical value."

Tesla goes on to discuss his place among Edison and Bell, stating, "The telephone means convenience, the incandescent lamp comfort but power means bread and butter."

In this fascinating letter, Tesla observes his place within the hierarchy of America's great inventors of the era: while Bell and Edison stood on the shoulders of inventors who came before, he insists that he stands alone.

"This fantastic handwritten letter reveals Tesla's hubris with his prediction that Edison's light bulb would be the invention forgotten," said Bobby Livingston, Executive VP at RR Auction. "But history shows that If not for Elon Musk, many of us wouldn't remember Telsa's place in scientific history."

Albert Einstein typed letter where Einstein comments on his "theory of relativity" sold for $25,781.

The Fine Autograph and Artifacts auction from RR Auction began on December 13 and concluded on January 12. For more information, go to www.rrauction.com.