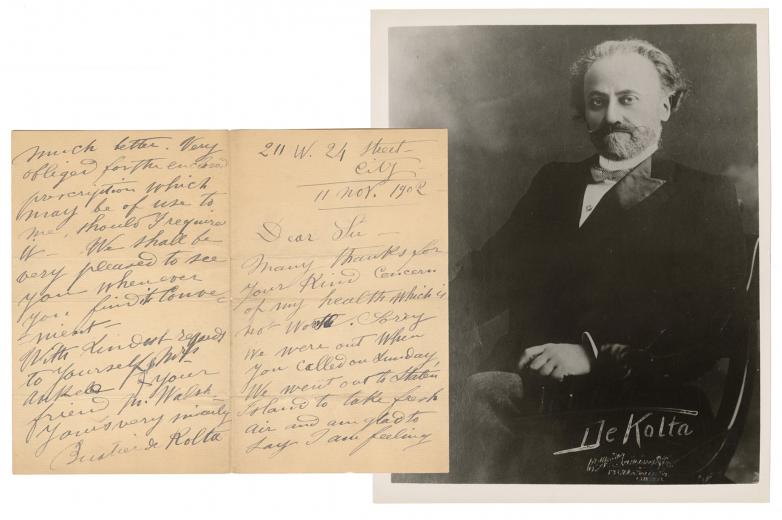 Chicago — Potter & Potter Auctions is pleased to announce its upcoming midwinter magicana sale to be held on Saturday, February 29th, 2020 starting at 10am at the company's gallery, located at 3759 N. Ravenswood Ave., Chicago, IL 60613. All lots from this event will be on display and available for public preview on Thursday, February 27th and Friday, February 28th from 10:00am to 5:00pm in the Potter & Potter facility. All times noted are CST.

Magic apparatus used by some of the world's most recognized performers of yesteryear occupies many of the top lot slots in this expertly curated sale. Lot #62, T. Nelson Downs' late 19th century billiard ball stand is estimated at $4,000-6,000. This nickel-plated example holds seven white balls and is accompanied by a LOA signed by George Daily and Mike Caveney. It states that the prop was donated to the Egyptian Hall Museum by Bud Tracy, one of Downs’s longtime friends, and that the piece was stored in Downs’s personal suitcase along with the balance of his act. Lot #67, Fu Manchu’s c. 1910 watch mirror and pistol illusion is estimated at $4,000-6,000. In this trick, a borrowed watch is forced into the barrel of the magician’s pistol. When the pistol is fired at a mirror resting on the performer’s table, the mirror shatters, and reveals the borrowed watch hanging from the back of the frame. This outstanding illusion includes a LOA describing the provenance of the apparatus. And lot #71, a c. 1979 wooden packing case used in the touring production of Doug Henning’s breakout hit The Magic Show is estimated at $3,000-5,000. This Magic Show Substitution/Metamorphosis Trunk is in working condition and is accompanied by historical information and documentation, including a LOA signed by magician and collector Abb Dickson.

Materials owned, associated with, or used by Harry Houdini continue to thrill collectors almost a century after his untimely death in 1926. Lot #359, a life-size plasticine-clay bust of Houdini in a jacket and bowtie, is estimated at $5,000-7,000. This was one of two busts of Houdini housed at the Houdini Museum of Magic in Niagara Falls, Canada. A 1995 fire ruined many of the museum’s treasures; this sculpture was partially damaged in the blaze but has been restored to near fine condition. Lot #369, a pair of c. 1933 oval shaped Harry and Bess Houdini pocket mirrors, is estimated at $4,000-6,000. These “mirror cards” were presented to members of the Houdini Club of Philadelphia at its annual banquet on January 7th, 1933. This is one of ten pairs extant. And lot #375, a shadowbox containing fragments of Houdini’s water torture cell, is estimated at $2,000-3,000. The display includes two pieces of charred wood and two nails, from the construction of his original water torture cell, alongside a reproduction photograph and mini-poster advertising this signature escape stunt.

Fine selections of stage worn clothing and costumes insure that this sale is dressed for success. Lot #72, a c. 1979 jumpsuit worn and used by Doug Henning, is estimated at $2,500-5,000. It was made by Western Costume of Hollywood and is decorated with a large silver lightning bolt, outlined by red sequins. This iconic costume was used in publicity photographs, including one advertising Henning's performance of walking through a wall. Lot #107, a lot of two c. 1950s-era black and sequined stage costumes worn by Julie Capriotti Mulkey (wife and partner of the magician The Great Virgil), is estimated at $400-600. The pair comes with a vintage photograph of Julie wearing one of the costumes, as well as a hat and a sequined mask. And lot #439, a c. 1950s-era tuxedo owned and worn by The Great Virgil, is estimated at $250-350. The suit includes a wool tailcoat with two custom-tailored interior pockets - possibly for dove work - as well as trousers, a vest, a bow tie, and a dress shirt.

This auction's library of nearly 75 antique to contemporary magic books is simply spellbinding.  Lot #247, a first edition of Houdini's Miracle Mongers and Their Methods from 1920 is estimated at $2,000-3,000. This handsome example includes an inscription on the flyleaf reading, “To my friend Walter Lippman, Best wishes, Houdini. I did the buried “alive” in Berlin Germany 1908 – rebuilt it in 1916 – & still have apparatus. H. May 27/26.” Lippman, the father of modern journalism, was a two-time Pulitzer Prize winner. Houdini’s inscription provides more history on a stunt he infrequently performed, spotlighting the fact that he did present "buried alive" in Germany in 1908, long before a poster advertised it in 1914.  Lot #221, a 400+ page original typescript titled The Magic of Dai Vernon by Frank Csuri, is estimated at $800-1,200. Csuri passionately researched the art of sleight-of-hand and its modern masters; his first project was a complete transcription of the published record of Dai Vernon’s inventions. From there, he went on to transcribe the tricks and letters of other members of Vernon’s circle.  This massive body of work is only the second of its type encountered by the Potter & Potter experts. And lot #213, an 1897 copy of H.J. Burlingame's Herrmann The Magician His Life; His Secrets, is estimated at $500-700. This copy, with provenance to the British magician Charles Bertam, is inscribed "Charles Bertram/from/W Robinson" on the front page.

Important, can't look away antique promotional posters are another key category in this magicana sale. Lot #460, a c. 1918 Chung Ling Soo Peacock Feather poster, is estimated at $4,000-6,000. This handsomely framed half sheet color lithograph was printed in London by J. Weiner Ltd. and features a bust portrait of Soo in the center of a peacock feather, on a striped pastel background. Lot #459, a Chung Ling Soo Marvelous Chinese Conjurer poster, is estimated at $3,500-4,5000. This framed, half-sheet color lithograph is illustrated with a flag bearing the image of a dragon and an offset medallion portrait of Soo, and was printed in Birmingham by James Upton in 1912. And lot #463, a Horace Goldin The Tiger God poster, is estimated at $3,000-5,000. This framed lithograph, printed in c. 1910 in Birmingham by the Moody Brothers, depicts Goldin’s mini-magical play wherein a damsel was rescued from the jaws of a live tiger.

Rare, top-tier selections of ephemera, including correspondence and letters, are certain to make a long lasting impression on collectors. Lot #331, a rare, autographed letter from magician Buatier De Kolta to photographer, artist, and magician Robert Ankele is estimated at $1,000-1,500.  This two page letter on a single folded sheet is dated November 11, 1902 and notes, in part, “Many thanks for your kind concern of my health which is no worse. Sorry we were out when you called on Sunday. We went out to Staten Island to take fresh air and am glad to say I am feeling much better. Very obliged for the enclosed prescription which may be of use to me…” Lot #381, a letter from Harry Kellar concerning business matters, is estimated at $500-750. This boldly signed note is dated July 27, 1897 and is written on a single sheet of lithographed letterhead bearing his famous “imps” portrait. And lot #282, two letters from Alexander “The Man Who Knows” to Herman Homar of Chicago, is estimated at $200-300. They are both dated 1921, are written on pictorial letterhead, and bear stamped “C. Alexander” signatures.

Photographs, archives, and oddities that defy traditional categories close the loop on this exciting magicana event. Lot #297, a collection of Lincoln Theatre Fire photographs and clippings collected by Harry Blackstone, his family, and associates, is estimated at $200-300. Blackstone was performing in Decatur, Il at the Lincoln Theater on September 2nd, 1942 when fire broke out in an adjacent building.  With calm humor, Blackstone was able to help the audience exit the theater safely, and without panic. Blackstone's son notes that his father’s orderly evacuation of the theater was perhaps his “greatest feat.” Lot #422, a c. 1914 photograph signed by Howard Thurston, Maurice Raymond, and Eugene Laurant is estimated at $1,200-1,800. Our experts believe that this original, hand-signed picture is probably the only image signed by these three great magicians together. And let's end this preview with a nod to lot #93, a c. 1950s-era Mombo The Talking Shrunken Head, estimated at $1,000-1,500. In this trick, the lifelike shrunken head whispers answers to questions posed to it from the audience. Many of these devices sold for the astounding sum (at the time) of $360 in the 1950s and 60s.

According to Gabe Fajuri, President at Potter & Potter Auctions, "This third sale from Jim's collection is a bit different in content than last year's auctions, but no less appealing, especially considering the fact that there is a greater variety of books, ephemera, and vintage magic posters than one might expect. While Jim's collection was filled with rare, scarce, and unusual vintage magic apparatus (many lovely examples of which are in this auction), his was not a one-dimensional collection. Of the three sales we have held showcasing his holdings so far, I'd say that this one is the most well-rounded."