Polonsky Exhibition of the NYPL’s Treasures to Open September 24 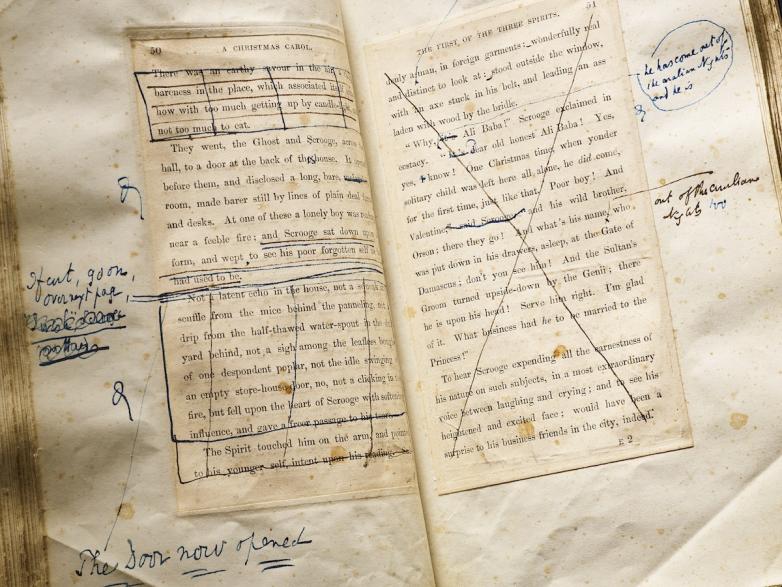 The Polonsky Exhibition of The New York Public Library’s Treasures will open on September 24, 2021, at the iconic Stephen A. Schwarzman Building on Fifth Avenue and 42nd Street, giving the public an opportunity to see and explore over 250 rare and unique items from the Library’s renowned research collections.

The objects—spanning 4,000 years of history—represent moments, movements, and stories that have helped shape the world. They continue to inspire curiosity, conversation, and a stronger understanding of the past to inform a better future. The exhibition draws exclusively from the Library’s research collections, which contain over 45 million objects including rare books, manuscripts, photographs, prints, maps, ephemera, audio and moving image, and more, collected over the institution’s 126 years and accessible at the Library’s research centers: the Stephen A. Schwarzman Building, the Library for the Performing Arts, and the Schomburg Center for Research in Black Culture.

Highlights of the exhibition—made possible with a generous $12 million gift from philanthropist Dr. Leonard Polonsky CBE and The Polonsky Foundation and curated by a team of research library staff led by Declan Kiely, the Library’s Director of Special Collections and Exhibitions—include:

•    Thomas Jefferson’s handwritten copy of the Declaration of Independence—an early example of “tracked changes,” with Jefferson underlining passages, including a whole paragraph condemning the slave trade, that were removed in the final ratified document
•    An original copy of the Bill of Rights, featuring 12 amendments (two were never ratified)
•    Charles Dickens’s writing desk, chair, and paper knife (the handle of which is made from the paw of his beloved, deceased cat Bob), and his personal copy of A Christmas Carol with his handwritten notes for public readings
•    The Gutenberg Bible, printed in 1455—James Lenox’s copy, the first to be brought to the Americas
•    The Hunt-Lenox Globe—one of the earliest surviving terrestrial globes, one of only two known Renaissance-era maps or globes to bear the motto Hic Sunt Dracones (“Here be dragons”), and one of the earliest cartographic depictions of the Americas
•    The only surviving copy of a letter from Christopher Columbus to King Ferdinand’s court announcing his “discovery” and “claiming” the Americas
•    The stuffed animals that belonged to the real-life Christopher Robin and inspired the Winnie-the-Pooh stories
•    Virginia Woolf’s walking stick, as well as a letter from her husband Leonard Woolf to her longtime lover Vita Sackville-West documenting its discovery following her suicide
•    The Negro Motorist Green-Book, which gave Black travelers tips on safe places to stay and eat in the United States
•    One of our 6 Shakespeare First Folios
•    A small, bronze model of pioneering sculptor and educator Augusta Savage’s Lift Every Voice and Sing (also known as The Harp), an important, landmark sculpture that debuted at the 1939 World’s Fair
•    Manuscript page of Maya Angelou’s poem I Know Why The Caged Bird Sings
•    Manuscript page of Tom Wolfe’s novel The Bonfire of the Vanities
•    A 1773 poetry collection by Phillis Wheatley, the first Black author of a published book of poetry, written during her enslavement
•    George Washington’s handwritten Farewell Address, based on Hamilton’s draft (which is also in our collection and will be featured in a future Treasures exhibition rotation)
•    A page of Malcolm X’s unpublished autobiography chapter “The Negro,” as well as his briefcase
•    A manuscript draft fragment of Mary Wollstonecraft’s A Vindication on the Rights of Woman, and first edition published in 1792
•    A selection of cuneiform tablets, 3rd–2nd millennia BCE
•    13th-century edition of the Life of the Prophet (Siyer-i Nebi), considered the most complete visual portrait of the life of Muḥammad in existence
•    The set model for the Off Broadway production of In The Heights
•    A copy of the formal invitation to Edith Wharton’s wedding
•    James Baldwin’s handwritten open letter to activist Angela Davis, who was arrested (and eventually acquitted) essentially for being an outspoken civil right activist, as well as a copy of his speech “The Negro Novel”
•    Charlotte Brontë’s traveling writing desk
•    Manuscripts and sheet music by Bob Dylan, Dizzy Gillespie, Wolfgang Amadeus Mozart, and Ludwig van Beethoven (as well as a lock of his hair)
•    Jack Kerouac’s proposed cover design for On the Road
•    First edition sheet music of “The Star Spangled Banner,” complete with the typo “A Pariotic Song”
•    The 1811 Commissioners’ Map and Survey of Manhattan Island—a preliminary grid plan for the city’s future growth
•    Artwork by Henri Matisse, Édouard Manet, Andy Warhol, Faith Ringgold, Romare Bearden, and Edward Hopper
•    Photographs by Diane Arbus, Chuck Stewart, Berenice Abbott, and Lewis Wickes Hine
•    Joseph-Siffréde Duplessis’s life portrait of Benjamin Franklin that is the basis for the portrait that appears on the $100 bill

Timed tickets to the exhibition—held in Gottesman Hall, the newly restored and renovated exhibition space on the main floor of the 42nd Street library—will be available to the general public beginning at 10 AM on Monday, August 23 at nypl.org/treasures.

“To move forward and make real and essential progress as a society, we need to understand what came before us. We need to learn the stories that have contributed to our collective story, the awe-inspiring, the heartbreaking, the infuriating, the spectacular, and the simple,” said Anthony W. Marx, president of The New York Public Library. “This is at the heart of the Library’s mission: to preserve and present fact and truth so anyone—now or generations from now—can explore it, learn from it, understand it in new contexts, and use it to grow and create a better, brighter next chapter. Whole our collections have always been accessible to the public, we have long aspired to share these treasures even more broadly, ensuring that everyone can feel goosebumps in their presence and hopefully, be inspired to learn more and to join in shaping the narrative of history that this exhibition makes so clear is always contested and never finished. The goal is to spark a lifelong curiosity in people that leads to further exploration, conversation, and engagement, and I believe this incredible exhibition, with its overwhelming number of important, relevant objects, will do just that. We are so grateful to Leonard Polonsky and the Polonsky Foundation for making the dream of a Treasures exhibition possible, and I encourage everyone of all ages to visit.”

“The New York Public Library is an iconic institution with a trove of buried treasures,” said Leonard Polonsky CBE. “I’m delighted to help bring them to the surface so that the public can forever share in them.  It has always been my purpose to democratize knowledge and provide the public with access to rare documents and artifacts. The treasures rotating through this exhibition represent some of the most important roots of our culture and civilization.”

In its inaugural iteration, The Polonsky Exhibition of The New York Public Library’s Treasures is organized into nine sections: Beginnings, Performance, Explorations, Fortitude, The Written Word, The Visual World, Childhood, Belief, and New York City. Each section highlights the stories behind the individual objects selected, as well as their contributions to a broader historical narrative—one that is still being written, just as the Library continues to acquire new material and expand its special collections.