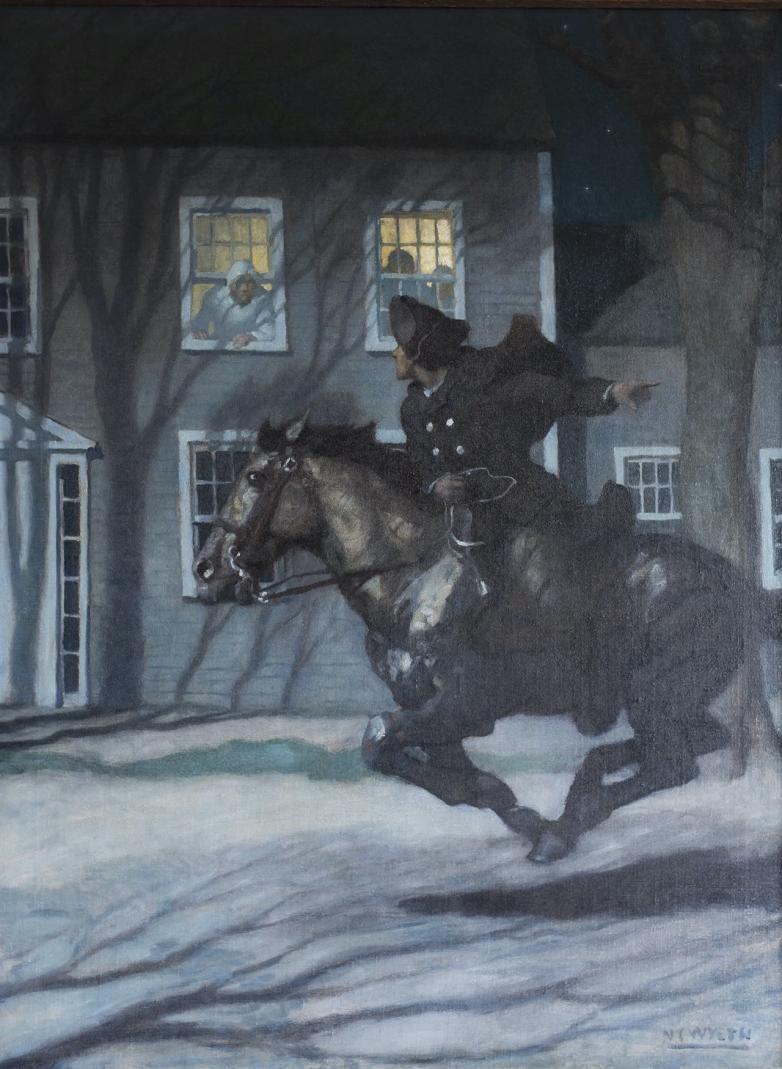 Worcester, MA & Concord, MA — In February 2020, the Concord Museum and the Worcester Art Museum will jointly present Beyond Midnight: Paul Revere, an exhibition that provides a revolutionary perspective on the artistic production of this important American patriot. Organized by the American Antiquarian Society and drawing on its unparalleled collection of Paul Revere materials, as well as major artworks and objects from other collections, the exhibition will show the entrepreneurial and creative spirit of this early American artisan and his impact on the social, economic, and political life of the United States. The exhibition will be on view concurrently in Worcester and Concord from February 15 through June 7, 2020.  To see the full exhibition, visitors are encouraged to visit both museums. When paying admission at one museum, visitors will receive a “two for one” voucher to use at the other location.

Beyond Midnight is structured around four themes, embracing both the figure of Revere (1735-1818) that is well known—that of the Revolutionary War hero—and the wider range of his artistic and commercial experiences that have often received less attention. In doing so, it charts the development of the mythology around Revere, which ultimately diminished his recognition as an inventive artisan who was adept at “technology transfer,” applying the concepts and tools from one area of work to another. The exhibition will also place Revere within the larger context of class, consumption, and production in the 18th century American Colonies, and explore the incredible network of commercial relationships—on both sides of the Revolution—that helped foster his business. The exhibition includes more than 100 exceptional objects across the two venues. Two of the four themes of the exhibition will be presented principally at the Concord Museum: Revolutionary Revere and Revere the Legend. The other two themes, Revere the Maker and Revere’s Network, will be explored primarily at the Worcester Art Museum.

“As is so often the case with figures from history, the reality of Paul Revere’s life is much more complicated, and much more interesting, than our sometimes one-dimensional view through the lens of his role as a war hero,” said Matthias Waschek, the C. Jean and Myles McDonough Director of the Worcester Art Museum. “We are excited to present this exhibition to New England audiences in collaboration with the Concord Museum, and with organizational support from the Worcester-based American Antiquarian Society. The exhibition continues our work over the last few years to reveal the often-overlooked social and political elements that infuses art and artifacts, and to engage our audiences in thinking about how an object’s beauty and its history are intertwined.”

“When Longfellow first depicted Paul Revere racing through the countryside carrying his midnight alarm, he hoped to awaken his contemporaries’ conscience to the fact that as long as slavery existed, the American revolution was unfinished and that individual sacrifice and heroics were called for again to ensure our country lived up to its founding ideals,” said Tom Putnam, Edward W. Kane Executive Director Concord Museum. “Through this engaging new exhibit, we look forward to examining Revere’s life and revolutionary career and to consider how it informs our history and our times.”

Revolutionary Revere (Concord Museum) examines Paul Revere’s work during the Revolutionary War, later immortalized in popular American memory by Henry Wadsworth Longfellow’s 1861 poem Paul Revere’s Ride. But Revere’s role as a Patriot and revolutionary began earlier than his midnight ride in 1775, such as with his 1770 prints detailing the Boston Massacre, a trigger for the subsequent war. During this period, Revere produced or collaborated on many projects focused on increasing anti-British sentiment, like his engraving A view of part of the town of Boston in New-England and British ships of war landing their troops! (1770) or his writing for papers like Mass. Spy or Thomas's Boston Journal (July 7, 1774). Revere himself was also captured by artists of the period, such as with a portrait print by Charles Balthazar and Julien Fevret de Saint-Mémin from 1801. The print shows an aged Revere in profile, looking more like an elder statesman than an artist-revolutionary. Also on view at Concord are other objects connected with Revere’s history, including the famed lantern (c. 1770) that was hung in the Old North Church as a signal from Revere, John Hancock’s trunk (c. 1775) once protected from the British troops by Revere while the battle was raging on Lexington Green, tea salvaged from the Boston Tea Party (1773), and a tea pot, made of pewter and wood (1750-1770), that belonged to Crispus Attucks, an African and Native journeyman who died at the Bloody Massacre.

Revere the Maker (Worcester Art Museum) presents a wide array of objects that attest to Revere’s skill and creativity as an artisan. His work as a silversmith, making commissioned serving pieces and sets, is well-known and for good reason: Revere’s Sugar Urn (c. 1795), Fluted Teaspoons (c. 1785), Tankard (c. 1760-1770), and other, similar objects reflect both his refined design aesthetic and incredible talents as a metalworker. So, too, does the tea set created in 1773 for Dr. William Paine and Lois Orne of Worcester—the largest single order ever recorded in Revere’s ledgers.  John Singleton Copley’s famous portrait painting from 1768, showing a thoughtful Revere holding a silver teapot—a visual reminder of his most famous occupation—is also on view at the Worcester Art Museum.

This part of the exhibition takes viewers beyond these items, presenting an array of objects in different materials, demonstrating Revere’s diversity. For example, several engraved copper plates, a set of shoe buckles (c. 1790), and a gold wedding ring (1773) and Crowninshield Mourning Ring (c. 1761) show his capacity for translating his artistic vision to other metals.

Nor was Revere constrained by scale, or a focus on fine metals: in 1792, Revere established a foundry in Boston, which developed important innovations in the creation of bells. Ultimately, the foundry produced several hundred church bells, some as large as 2,500 pounds, while also transferring the techniques used to create bells in order to make cannons and other large-scale cast metal objects. A successful business that was eventually taken over by Revere’s son and grandsons, the establishment of the foundry also represented an important milestone for the nascent United States: the local casting of church bells for New England churches, rather than having to import such items from England.

Commercially, Revere’s success depended upon a wide network of contacts, a subject explored in depth in Revere’s Network (Worcester Art Museum). Both before and after the Revolutionary War, Revere worked with nearly anyone capable of paying him, choosing to set aside his Patriot politics when Loyalists offered work. For example, the remarkable silver tea service and other items commissioned by the Paine family in 1773 were made with the same care and craftsmanship as other objects—despite Paine’s pro-British sympathies. He also created an extensive array of finely designed, decorated, and printed documents for clients: a Bust of John Hancock (March 1774) and Bust of Samuel Adams (April 1774); currency documents, including Colony of Mass Bay, Currency for Soldier Use (May 25, 1775); a notification for a local branch of the Masons (1772) and a Medical Certificate for John Warren, MD (June 8, 1785). Revere even produced the illustrations for Susannah Carter’s The Frugal Housewife (1772).

The final theme of the exhibition is Revere the Legend (Concord Museum), which returns viewers to the Revere of mythology, as his status as a hero becomes the settled narrative in the 19th century. Central to this is Longfellow’s poem, presented here in the January 1861 edition of Atlantic Monthly where it was first published—and which spawned many other works on the subject, including a 1910-1920 gouache of Revere’s Ride by Enos Comstock and a watercolor by Charles Kendrick from the same period; the 1922 painting, Paul Revere, by the renowned American artist N.C. Wyeth; a collection of postcards narrating Revere’s ride; and Irwin Shapiro’s cover art for the book Walt Disney's Paul Revere (1957). Continuing the patriot’s legend to modern times are fun artifacts, such as a Pabst Blue Ribbon beer ad poster featuring Paul Revere on his horse.

Beyond Midnight: Paul Revere is curated by two scholars from the American Antiquarian Society: Nan Wolverton, Ph.D., Director of Fellowships and the Center for Historic American Visual Culture (CHAViC) and Lauren Hewes, Andrew W. Mellon Curator of Graphic Arts. The exhibition is accompanied by a catalogue of essays and images that also transforms readers’ understanding of the iconic colonial patriot. Essays examine Revere as a patriot, a manufacturer, a precious metalsmith, a printer, and an engraver. His legacy as a polymath is documented in the book’s complete illustrated checklist of the exhibition’s artifacts.

This exhibition is organized by the American Antiquarian Society with generous support from CHAViC, Center for Historic American Visual Culture, AAS; Henry Luce Foundation; and Richard C. von Hess Foundation.  Originally presented at the New-York Historical Society from September 6, 2019 through January 12, 2020, the exhibition will conclude its tour at the Crystal Bridges Museum of American Art from July 4 to October 11, 2020.

Beyond Midnight: Paul Revere will be accompanied by lectures, workshops, and events at both the Concord Museum and the Worcester Art Museum. Information about these programs can be found at concordmuseum.org and worcesterart.org.