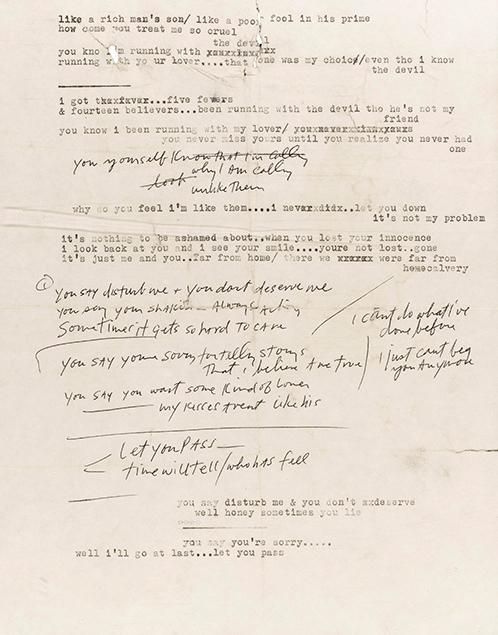 New York — This rare working manuscript takes us back to Nashville in the early months of 1966, when Bob Dylan, at the height of his powers, was writing his seventh studio album, Blonde on Blonde.

Here we see the outpouring of fevered creativity that lay behind the classic album, as he penned out ideas for Most Likely You Go Your Way in four typed lines of text at the bottom of the page: “you say disturb me & you don’t deserve ǀ well honey sometimes you lie ǀ you say you’re sorry…… ǀ well I’ll go at last…let you pass”. It was these lines which formed the kernel from which Most Likely grew, with the page being then filled with another 11 lines of handwritten lyrics as Dylan developed the song. The combination of typescript and manuscript is typical of Dylan's mid-60s drafts.

Most Likely was to become one of the album’s most memorable songs and a stalwart of Dylan's live performances, most notably serving as the opening and closing number in his 1974 tour with The Band (recorded as Before the Flood).

What gives this manuscript exceptional interest, however, is the presence of a second, abandoned song alongside the draft of this well-known piece. Typed over twelve lines across the top half of the page, the song contains a repeated refrain about “running with the devil”, before ending in a fragmentary state after some twelve lines with the words: "It's just me and you .. Far from home/ there we were far from calvery".

Estimated at £12,000-15,000, the manuscript is offered as part of Sotheby’s online sale of English Literature, History, Children's Books and Illustrations, open for bidding from 5-12 May.

Elsewhere in the sale, further highlights include: a letter from Winston Churchill to Squadron Leader Neville Duke, following a tragedy at the Farnborough Air Show causing the death of 29 people (est. £6,000-8,000); a silver cigarette case presented by Winston Churchill to his driver during a visit to Canada in 1929 (est. £3,000 - 3,500); an original unpublished watercolour for the character of “The Drunkard” in The Little Prince (est. £10,000-15,000); and location notes relating to Stanley Kubrick’s legendary unfinished film on Napoleon (est. £10,000-15,000).