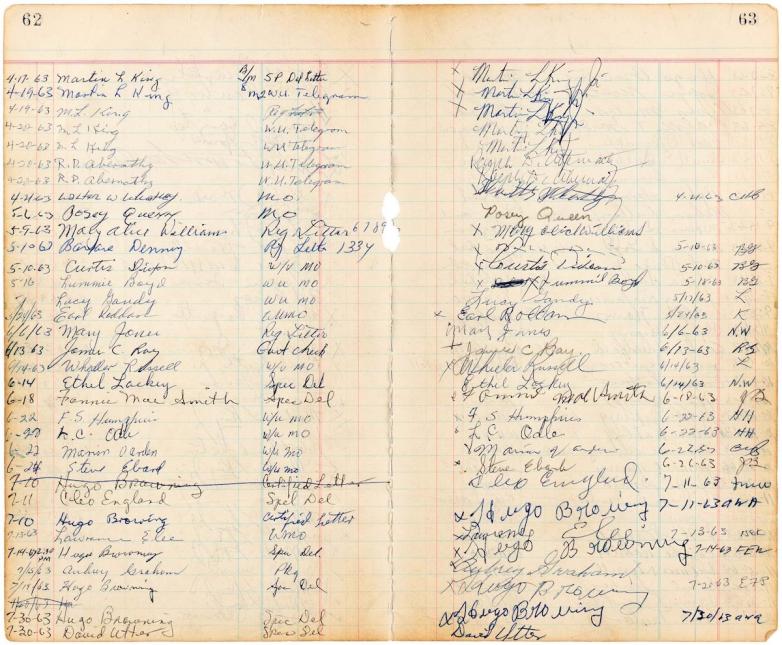 Logbook signed by the Rev. Dr. Martin Luther King Jr. during his 1963 incarceration at the Birmingham Jail. Opening bid: $10,000

York, PA – Black History Month, observed annually in February, recognizes the African-American struggle for freedom and key events that empowered the Civil Rights Movement. In honor of Black History Month and the legacy of the Rev. Dr. Martin Luther King Jr., Hake’s will open its February 24-25 auction with a unique and highly important testament to the great civil rights leader’s courage and resolve. Never before seen publicly, the lot consists of four logbook pages from the Birmingham Jail, hand-signed 12 times by Dr. King during his 1963 incarceration.

In his leadership role against racial discrimination and inequality, King rallied millions to the civil rights cause, dynamically but peacefully. He led the 1955 Montgomery bus boycott and helped organize protests in Birmingham and Washington, where he delivered his immortal “I Have A Dream” speech. Five years before his tragic 1968 assassination, King was jailed in Birmingham, along with his close friend and mentor Ralph Abernathy. During that incarceration he produced his manifesto on non-violent civil disobedience known as “Letter From A Birmingham Jail.”

While in jail, King received communications from the outside world by mail or telegram. “Each time a person held at the Birmingham Jail received a communication, he would have to hand-sign a jailhouse logbook. The four pages [two front, two back] contain 12 full Martin Luther King signatures, one for each time King accepted a communication. Additionally, there are five entries hand-signed by Ralph Abernathy,” said Hake’s president, Alex Winter. “What makes these pages all the more remarkable is the fact that, at some point, the logbook was discarded. Had it not been salvaged by an employee who recognized its significance, it would have been lost forever.”

“The document was first brought to the attention of Worthpoint.com, the online site dedicated to helping people learn more about the value and history of their items,” Winter noted. “WorthPoint helped the family authenticate the papers and connect with trusted partners; the family ultimately chose Hake’s to bring the historic pages to market."

There are, in fact, very few surviving artifacts associated with “Letter From A Birmingham Jail,” supporting Winter’s observation that the value of the pages is “inestimable.” The closest point of reference is the copy of King’s first book that he inscribed to Chief Justice Earl Warren. It set a world auction record for an MLK autograph when Hake’s sold the book in 2015 for $49,335. Offered with a Hake’s COA and JSA LOA, the jail logbook pages will open with a $10,000 minimum bid. There is no reserve.