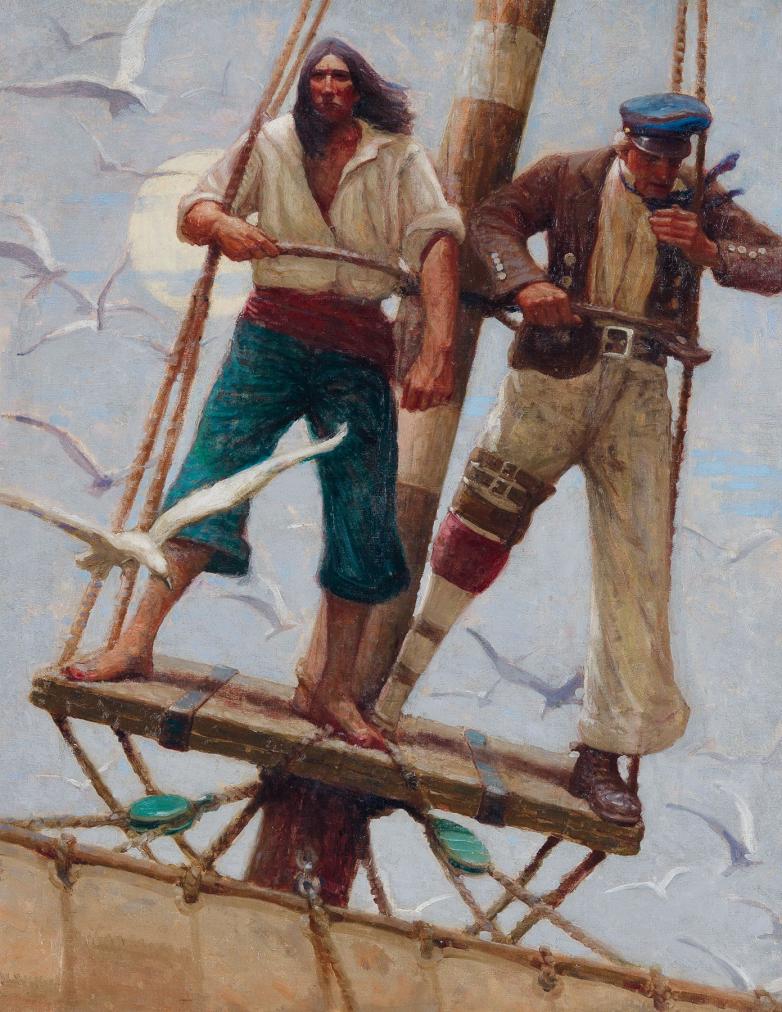 New York – Swann Galleries’ sale of Illustration Art on Tuesday, June 4 is set to offer original works by favorite illustrators from literature, theater, advertisements and more. Auction debuts from some of the fields brightest ensure a standout auction.

Mead Schaeffer’s frontispiece and dust jacket design for the 1922 reissue of Herman Melville’s Moby Dick leads the sale at $25,000 to $35,000. In the midst of a Melville rediscovery in the 1920s, Schaeffer was commissioned by Dodd, Mead & Co. to produce illustrations for a series of classic novels. His dramatic illustration of Ishmael and Ahab in the crow’s nest propelled his long career and aided in the revival of interest in the author.

Frederic Remington’s depictions of the American frontier are highpoints alongside Schaeffer, with a pen and ink illustration for his story A Scout with the Buffalo Soldiers, published in the April 1889 issue of The Century Magazine ($25,000-35,000). Also of note is the 1888 drawing Baily Looking at the Photo of his Wife for the story One Touch of Nature ($6,000-9,000).

Miriam Troop makes her auction debut with Rain on Laundry Day, an oil on canvas used as the cover for the June 15, 1940 issue of The Saturday Evening Post. The cover made Troop the youngest woman to have a produced a cover for the publication. Rain on Laundry Day is expected to bring $4,000 to $6,000. Troop, a prolific magazine illustrator of the golden age, is also known for her illustrations in the 1977 printing of the beloved children’s book Heidi.

The 1940s staging of Shakespeare’s Othello staring Paul Robeson was the first time an American production of the play cast a black actor in the titular role with a white supporting cast; Al Hirschfeld’s drawing, Paul Robeson as Othello, published on August 9, 1942 in The New York Times, captures this groundbreaking moment. Offered at $25,000 to $35,000, it is also the only portrait of Robeson by Hirschfeld. Additional Hirschfeld theater portraits published in The New York Times include The Merry Widow at the Majestic Theatre in 1943, and Great to Be Alive! at the Winter Garden Theatre in 1950, both offered at $10,000 to $15,000. Eugene Berman’s first ever foray into the world of the theater with Decor Musical, a neo-Roman installation for the lobby of the Avery Memorial Theater on the occasion of the first annual Hartford Festival in 1936, is available at $2,500 to $3,500.

The original cover illustration for the first mass marked paper edition of Stephen King’s Carrie by James Barkley is set to come across the block. Carrie, King’s fourth novel but the first to be published, launched his career. The initial first edition sold thirteen thousand copies when it was released in 1974, but it was the Signet/New American Library edition with Barkley’s iconic cover, launched a year later, that sold over a million copies. The illustration is offered at $4,000 to $6,000. Sci-fi treasures from the estate of David G. Hartwell feature designs by Richard Powers including the alternative cover design for the book Rissa Kerguelen, 1976 ($2,000-3,000), the illustration for Star Mother, 1976 ($4,000-6,000), and the rear cover illustration Star Science Fiction Stories, 1953 ($3,000-5,000), as well as Lee Brown Coye’s cover for the 25th anniversary issue of the fantasy and horror pulp magazine, Weird Tales Vol. 40, No. 3, 1948 ($3,000-5,000).

In 1992 Edward Gorey proposed three illustrations for covers of The New Yorker, and two of these feature in the sale: the recently rediscovered Cat Fancy, featured on the December 10, 2018 issue, is one of only two published covers by the artist ($10,000-15,000), and Flappers and Topiary, which was used in memoriam of Gorey upon his death in 2000 ($7,000-10,000). Additional New Yorker material includes cartoons by Liana Finck and Liam Walsh, both auction debuts.

Likely advertisements for Abercrombie & Fitch by macabre icon Charles Addams include Morticia in the Market for Arsenic and Fester Shopping for Knives, available at $6,000 to $9,000 apiece. Two “gentlemen in the know” oil on canvas advertisements for Four Roses whiskey by John Philip Falter are set to be offered at $12,000 to $18,000 each.

Exhibition opening in New York City May 30. The complete catalogue and bidding information is available at swanngalleries.com and on the Swann Galleries App.