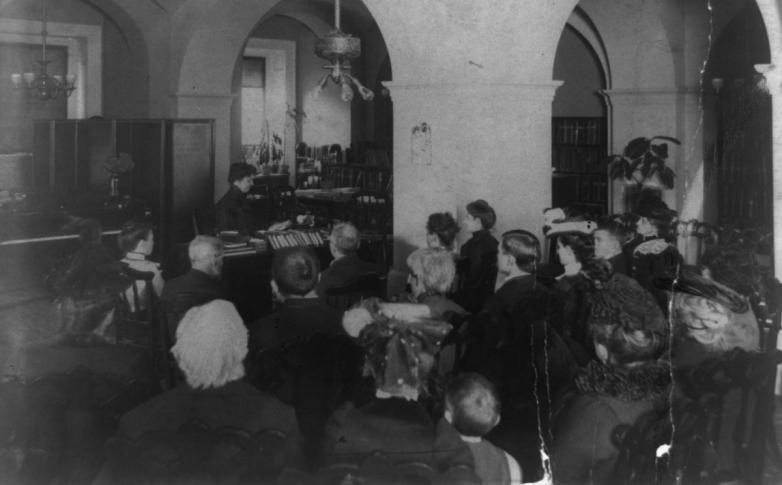 Reading room for the blind, Library of Congress, 1900.

Washington, D.C. — The Library of Congress has acquired the M.C. Migel Memorial Rare Book Collection from the American Foundation for the Blind, comprised of more than 750 items dating from 1617 to the present, including books by and about Helen Keller and other blind authors. The collection is a treasure trove of seminal books on blindness, maps, rare pamphlets and many volumes of poetry, biographies and autobiographies.

Among the rare finds in the collection are books that provide a historical perspective on changing social attitudes toward the blind and innovations in the treatment and education of the blind over the past 300 years. “The acquisition of the collection from the American Foundation for the Blind expands in a significant way the Library’s coverage of the historical responses to the practical, social and institutional needs of the blind,” said Mark Dimunation, chief of rare books and special collections at the Library of Congress. “This is a most welcome addition for researchers as well as those who rely upon the Library for services and support.”

Jason Broughton, director of the Library of Congress'  National Library Service for the Blind and Print Disabled, added: “The Library‘s acquisition of this collection reinforces our long-standing commitment to serving blind and disabled communities. NLS works daily to ensure that all may read, and the Migel collection provides an excellent historical foundation as to why our work has been, and continues to be, so necessary.”

Kirk Adams, president and chief executive of the American Foundation for the Blind, said the acquisition of the Migel collection by the Library of Congress “is a wonderful step forward towards disseminating the history of blindness and recognizing the importance of disability history.”

“These volumes reflect centuries-old stigma surrounding blindness, and societies’ efforts at progress in the form of work opportunities for blind men and women, innovative teaching methods, and the twists and turns in the development of tactile books,” Adams said.

There are books by or about Samuel Gridley Howe (1801-1876), considered the founder of education for the blind in the United States and whose activism included advocating for the abolition of slavery, prison reform, support for refugees from Crete and caring for intellectually disabled children. The collection includes a copy of Howe’s “Atlas of the United States Printed for the Use of the Blind” published in 1837 and written in raised roman type.

Robert Irwin, the first director of the American Foundation for the Blind, began the collection in 1926 with a $1,000 grant approved by the board to create a definitive reference library for the blindness field. As the library donations grew from around the country, the foundation hired librarian Helga Lende to manage the collection. Lende expanded it by traveling to Europe and acquiring volumes in English, French, Spanish, German, Italian, Esperanto, Dutch, Polish and Norwegian.

The earliest book in the collection, published in France in 1617, concerns Louis Grotto, an Italian ambassador and orator who was blind, and is titled “Les Harangues de Louys Grotto, Aveugle D’Hadrie Admirable en Eloquence” (The Speeches of Louys Grotto, A Blind Man Famed for His Eloquence).

The first landmark book in the library is Denis Diderot’s “Lettre Sur Les Aveugles À l'Usage de Ceux Qui Voyent” (A Letter Regarding the Blind for the Attention of Those Who See), published in 1749. Considered radical in its day, the book explores the effect of all five senses on the intellect and what happens when there is loss of sight.

Nicholas Saunderson’s “The Elements of Algebra,” published as a series of 10 books in 1740, a year after his death, is also in the collection. Saunderson became blind as an infant after contracting smallpox, but his intellectual powers earned him a job as professor of mathematics at Cambridge University.

Works in the collection also highlight the expansion of tactile methods of reading beginning in the late 18th century. The Migel library includes the 1839 edition of Louis Braille’s book explaining his invention of a tactile six-dot reading and writing system rather than raised letters of the alphabet

The collection contains two copies of the rare first edition of “Essai Sur L'Education des Aveugles” (Essay on the Education of the Blind) by Valentin Haüy, published in Paris in 1786 using embossed letters of the French alphabet. Haüy founded the first school for blind children in Paris and a similar school in Russia, spearheading the creation of others in many European countries. His work reportedly sparked the beginning of modern methods in the education of blind people.

The rarest book in the collection is “Précis Sur L’Histoire de France” (A Summary of the History of France), published in Paris in 1837. This volume is one of only three known copies of the first edition of the first book embossed using the braille system. The other two copies are located at the Perkins School for the Blind in Boston, and at the Haüy Museum in Paris.

While Diderot, Hauy and Braille were the main proponents of modern methods of reading for the blind in France, the Migel library includes works from directors, inventors and writers who furthered their education and understanding in other countries. Among them was William Moon, an English inventor who lost his vision at 21 and in 1845 created the Moon Type, an embossed printing that used the outline of letters derived from the Latin alphabet and was considered easier to use than braille.

The more than 60 boxes in the rare collection include a letter from Paul the Apostle to the Ephesians written in raised type; other scripture passages; a picture book for the blind and a pamphlet describing musical notation for the blind.

About the American Foundation for the Blind

Founded in 1921, the American Foundation for the Blind is a national non-profit organization that creates a world of no limits for people who are blind or visually impaired. AFB mobilizes leaders, advances understanding, and champions impactful policies and practices using research and data. AFB is proud to steward the Helen Keller Archive, maintain and expand the digital collection, and honor the more than 40 years that Helen Keller worked tirelessly with AFB. Visit: afb.org/.

About the National Library Service for the Blind and Print Disabled

The National Library Service for the Blind and Print Disabled (NLS), Library of Congress (LC), administers the free library service that provides braille and talking books and magazines to people who cannot read or handle regular print materials because of a visual impairment, or physical or reading disability. The program is administered through an extensive network of cooperating libraries, located throughout the United States and its territories. More information is available at loc.gov/thatallmayread.