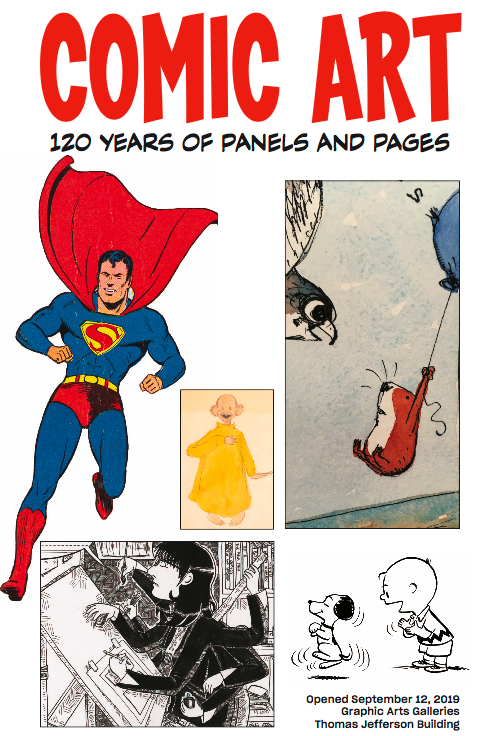 Washington, D.C. — A new exhibition at the Library of Congress explores the fascinating evolution of visual storytelling styles in comic art – from panels in early newspapers to contemporary images of some of the most famous and funny characters in print. Comic Art: 120 Years of Panels and Pages opened Sept. 12 and will be on view for a year in the Graphic Arts Galleries of the Library’s Thomas Jefferson Building.

The exhibition draws from the Library’s extensive collection of comic art, which includes some of the earliest comics, including the first successful newspaper comic strip featuring Richard Outcault’s “The Yellow Kid,” early drawings of “Peanuts,” superheroes including Batman, Superman and the Incredible Hulk in modern comic books, and much more.

“The Yellow Kid,” first published in a panel in the New York World newspaper in 1895, is credited with sparking the rise of comics as a new American art form. By the middle of the 20th century, a growing number of diverse comic artists were examining their own life stories and commenting on culture and politics while expanding into graphic novels, fanzines and web comics. Comic art characters and narratives have also spread across film, television, books and marketing to reach even more people.

Highlights of the exhibition’s first rotation include:
•    The first major recurring comic character in a newspaper, “The Yellow Kid;”
•    An early drawing of Charles Schulz’ beloved comic strip “Peanuts” from 1952 with Charlie Brown, Lucy, Patty and Snoopy;
•    A drawing of “Brenda Starr, Reporter” by Dale Messick, whose strip represents a milestone for female characters in comics by female cartoonists;
•    An original Batman comic book illustration from 1967;
•    A cover drawing of the Incredible Hulk by artist Marie Severin, one of the few women to advance to drawing major superhero titles for Marvel comics;
•    Self-published minicomics that helped launch the career of Raina Telgemeier;
•    An extremely rare first edition of “All-Negro Comics” created by black cartoonists in 1947.

Comic Art will feature 45 items in the first rotation and a second rotation in spring 2020. The exhibition is on view in the Graphic Arts Galleries of the Library’s Thomas Jefferson Building, 10 First St. S.E., Washington, D.C. The exhibition is free and open to the public Monday through Saturday, 8:30 a.m. to 4:30 p.m.