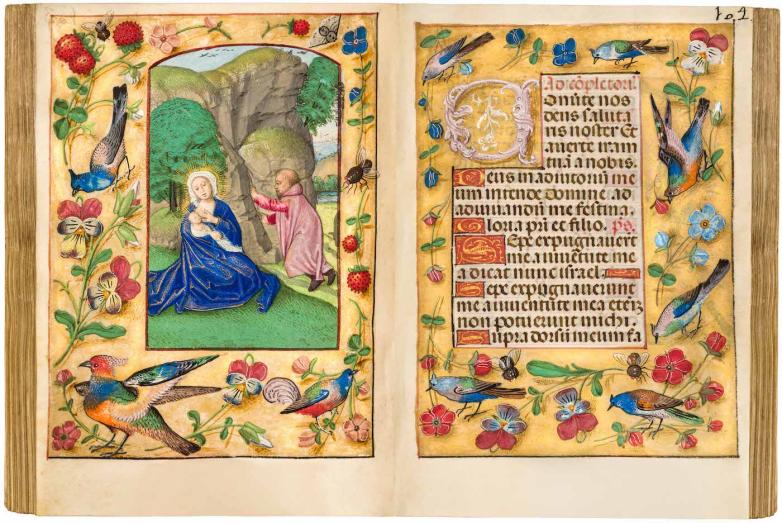 Basel, Switzerland — Grandeur is not difficult to find in the manuscripts and early printed books at Dr. Jörn Günther Rare Books, yet the collection highlights coming to TEFAF Maastricht this June surpass the usual level of extravagance in book decoration. Returning to Maastricht after a two-year hiatus, the Basel gallery presents a range of delights, spanning from the devotional volumes of the 13th century to lavishly illuminated French history books and a superb range of Books of Hours.

The Histoire ancienne jusqu’à César and Faits des Romains is an immense text which befits the delicate and precise decoration of this present manuscript, the first of the TEFAF Maastricht highlights. With 76 column-wide miniatures and two half-page frontispieces – one with six and one with four multi-part miniatures – this work is fit for a king and may well have been intended for one. The layout of the text and the style of the decoration bear close resemblance to the great historical works written and illustrated for King Charles V (r. 1364- 1380), while also possessing close connections to a work owned by Jean, Duke of Berry. Together with the commission’s regal decoration, these facts suggest that the present work was created for someone very highly placed at the king’s court, if not for the King himself then for his brother, the Duke of Berry.

The text traces the histories of Assyria, Troy, Thebes, Greece, and Rome, beginning with the story of Genesis and ending with the death of Caesar. In addition, this manuscript belongs to a group of 15 in which the history of Rome was expanded upon in a lengthy biography of Julius Caesar, known as the Faits des Romains.

Likewise, the Missal for use in the diocese of Soissons (France, 1250-1275) is an example of superlative decoration, as, with its 19 large decorated initials, 22 historiated initials, and 1 full-page miniature, it far surpasses the ornamentation of most of the known Missals from this period. Missals were made to be read at the altar during Mass by the presiding priest and thus were seen by few people, and seldom had large numbers of miniatures in them.

A spectacular example of French work of this period, the illuminations by the Vincent Master in the present work combine Cambrian and Parisian influences, ensuring that the appeal of codex has endured throughout its life, as the traces of its rebinding in the library of Charles-Joseph de Ligne, Prince de Ligne, attest. De Ligne, who had the book rebound and incised his gilt arms on the cover, was an important figure in the political landscape of the 18th and early 19th centuries: he travelled on diplomatic missions with Catherine the Great and corresponded with Voltaire, Rousseau, and Goethe.

The border around the large Crucifixion miniature consists of spiralling, twisted ivy tendrils in which two half-creatures with human faces and two dragons lounge. The style of this border betrays another hand, additional to the precise, meticulous style of the Vincent Master. Faces are made expressive with the light use of red pigment, and scenes are filled with movement. Overall, this masterful work is one of great character and variation, with a steady mixture of both humour and piety throughout its decoration.

The Arenberg Hours (Flanders, Bruges, c. 1500) is a later, but no less magnificent, example of elaborately ornamented manuscripts with devotional purposes. With its 16 full-page miniatures in full borders and 24 wonderfully decorated calendar pages representing day-to-day medieval life, this small but mighty gem holds a wealth of delights in its pages. Once housed in the prestigious library of the Dukes of Arenberg throughout the 19th to the mid-20th centuries, this Book of Hours boasts extravagant miniatures inspired by the zenith of early Flemish panel painting from the likes of Jan van Eyck, Hugo van der Goes, Rogier van der Weyden, and others.

Scholars have recognised in the imaginative artist of this book a specific hand that collaborated with the Master of the Dresden Prayer Book and is today known as the Master of Jannecke Bollengier. With the trompe l’oeil effect in the borders and the seasonal scenes over which the calendar is laid, the illustration in this work is as exacting and structured as a series of individual paintings, providing a fascinating insight into medieval life, as well as its artistic styles.